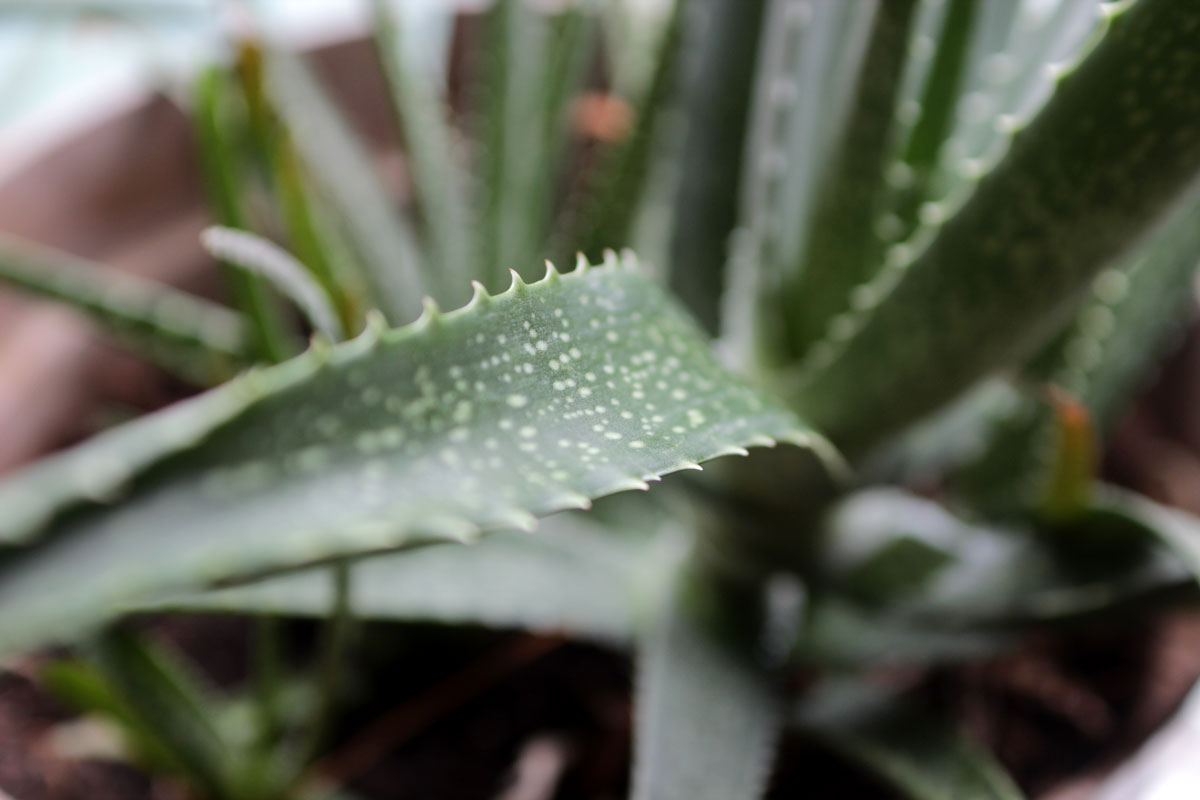 ALOE VERA
Lily of the Desert

Aloe Barbadensis
Also known as: Aloe Vera, Lily of the Desert, and the Burn Plant. There are over 240 different species of Aloe, growing mainly in the dry regions of Africa, Asia, Europe and America.

Egyptians recorded use of the herbal plant in treating burns, infections and parasites. African hunters still rub the gel on their bodies to reduce perspiration and their scent.
Although Aloe Vera is a member of the Lily family, it is very cactus-like in appearance. Of the 240+ species of Aloe, four are recognized as having nutritional value, with Aloe Barbadensis Miller leading the group. Aloe Barbadensis Miller is the type of Aloe used in most products that we buy in the store, which have Aloe in the list of ingredients. The Aloe gel contains over 75 nutrients, 20 minerals, 18 amino acids, and 12 vitamins, including B1, B2, B6, C, niacinamide, and choline. Aloe is about 96% water!

When I was a little girl my family traveled to Mexico to visit some missionaries in the mountains. We took along a couple of young, single guys that were new believers. One of those young guys fell asleep in the Mexico sunshine one afternoon, and woke up with the back of his legs, from his socks to his shorts, blistered dark red. It was the worst burn I’ve ever seen. For weeks this poor fellow couldn’t lie on his back, or even sit

properly in a chair. He was in a lot of pain! My mom was young and energetic, and her interest in herbs and health was just beginning. She had read that Aloe Vera is good for burns, but didn’t know how to use it or what to expect. She convinced the young man to let her try Aloe Vera on part of his sunburn to see if it would work. He was dubious but, in so much pain, he was willing to try anything. If they had only known how well the Aloe would work, they would have used it on all of the sunburned areas. Enormous Aloe Vera plants grew everywhere in that area of Mexico, so my Mom cut off several long, thick leaves and sliced them open, revealing the wet fleshy area that is the “meat” of the plant. She scraped out the gel-like meat and carefully smeared it on the back of the worst-burned leg, leaving the Aloe there to soak in. The other leg was untreated. A couple of times a day the “Aloe-leg” was coated with fresh Aloe. Within 24 hours, a difference between the two legs was apparent. Within 4 days, the “Aloe-leg” appeared to have had a milder burn than the other leg, and the pain was gone. The other leg was still dark and painful.At this point, the difference between the two legs was so marked, Mom began to put Aloe on the young man’s other leg as well, however, the advantage of early response was lost. At the end of a week, the “Aloe-leg” was mostly healed, and the skin only peeled lightly in the most badly burned area. The other, initially untreated leg, was peeling massively, forming scabs on oozing raw places, and still very painful. Needless to say, several Aloe plants came home to Tennessee with us at the end of our trip!

What Aloe Can Do

Aloe gel has a dramatic ability to heal wounds, ulcers and burns. Applied Aloe becomes a protective coating on the affected areas, infusing burns with cooling moisture. It also speeds up the healing rate by increasing the availability of oxygen to the skin, and increasing the synthesis (creation of new skin) and strength of tissue. Many people drink Aloe juice to soothe digestive tract irritations, such as colitis and peptic ulcers. As a food supplement, Aloe is said to facilitate digestion, aid in blood and lymphatic circulation, as well as kidney, liver and gall bladder functions. Aloe contains

at least three anti-inflammatory fatty acids that are helpful for the stomach, small intestine and colon. It naturally alkalizes digestive juices to prevent over-acidity, a common cause of indigestion. Acemannan, a newly discovered compound in Aloe, boosts T-lymphocyte cells that aid the immune system. Aloe can aid in keeping the skin supple, and has been used in the control of acne and eczema by rubbing the gel on the skin, and drinking the juice. Aloe taken internally is said to relieve arthritis and joint pain.

How to Use It

Burns, Diaper Rash, Skin Problems of all types: Simply cut off a fat, succulent Aloe leaf and slice it open. Cut or scoop out the meaty gel and apply to affected skin. Allow the gel to soak in or dry. A yellow sheen will appear on the skin as the Aloe dries. Once the Aloe has absorbed into the
skin, you can wash off the residue, or not. The dried Aloe is a bacteria-free seal, so I leave it on if I’m not going out.

Remove the thin outer skin of the Aloe and process the gel in a blender. Add 25 milligrams of vitamin C powder (or crush a vitamin C and add a tiny pinch of the crushed pill) to each cup of blended gel, and store in the refrigerator in an airtight container. The vit. C powder preserves the Aloe a little longer. This salve may be good for a week or more.

Slice open an Aloe leaf, scoop out the gel and process in a blender. Mix two tablespoons with juice and drink before meals (preferably). Repeat as often as desired. If diarrhea occurs, cut back on Aloe doses and gradually increase until you discover the amount of Aloe your body can handle without loosening the bowels.

Aloe Vera plants can be bought at every nursery and garden center. I keep several on my window sill, and they multiply easily. Plant them in sandy soil that is well drained. Aloes should be brought inside during cold winters as they cannot endure below-freezing temperatures. Potted plants need filtered sun or full shade. If the leaves get brown and fat, and the skin seems thin and transparent, you are overwatering, and possibly over-sunning. If the leaves get brown, thin, and hard, you are not watering enough. A healthy Aloe plant should have plump, bright-green leaves with firm, but tender skin. Divide off the little shoots occasionally to plant in new containers. Keep several plants going so that when you need some Aloe, you won’t hesitate to cut up one of these beautiful plants in order to save your skin!

If you use Aloe, you should cut away the skin and drain off the inner layer of yellow juice, leaving only the actual gel in the middle of the leaves. The yellow juice, especially prominent in older plants, has been known to irritate the skin upon contact. Test for a reaction by rubbing a small amount on the inside of your forearm before using on large areas of skin. I use younger, smaller plants that have no juice, and so have never encountered this problem. Very large amounts of ingested Aloe Vera juice will induce vomiting and/or diarrhea.

You may also
download the PDF version of this article to print or save for later reference.