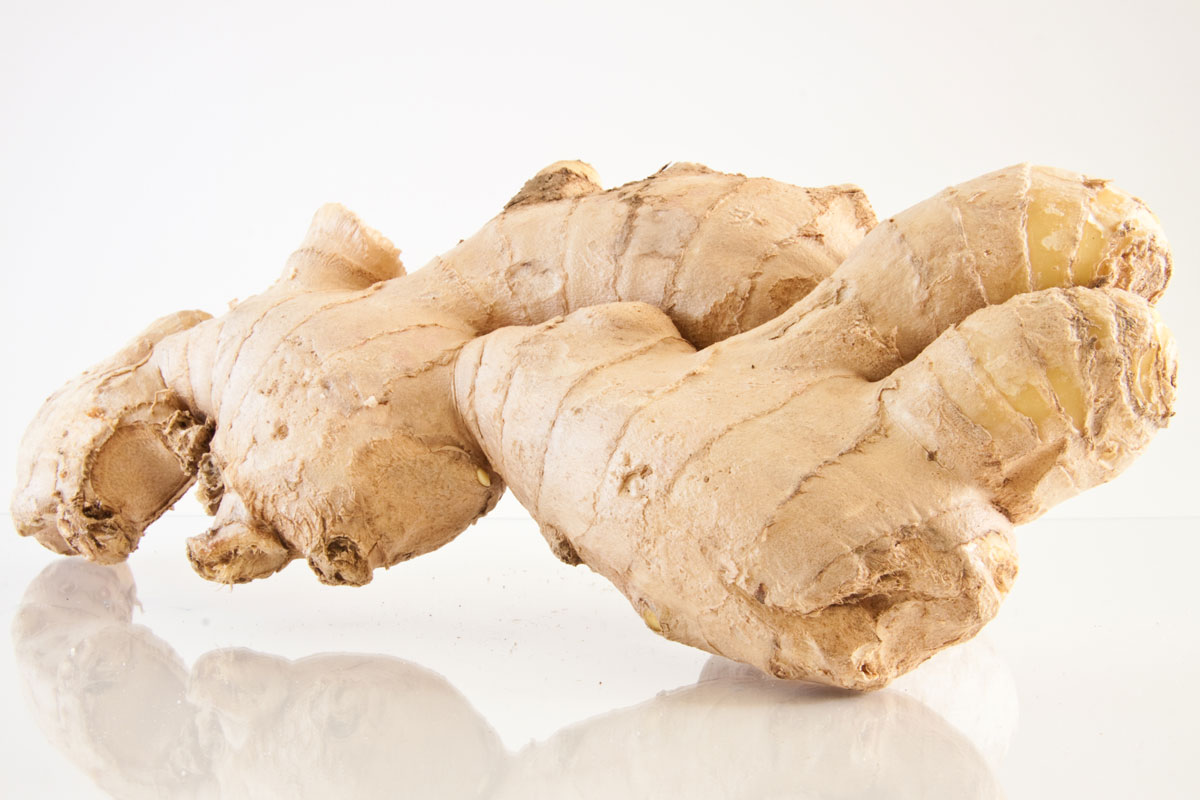 Ginger was given its official botanical name, Zingiber officinale, by the famous eighteenth-century Swedish botanist, Linnaeus. Linnaeus derived the genus title Zingiber from its Indian Sanskrit name singabera which means shaped like a horn. Originating in southern China, cultivation of ginger has spread to India, Southeast Asia, West Africa, and the Caribbean.
Ginger is one of more than 1,400 species belonging to the Zingiberaceae family; also members of the Zingiberaceae family are turmeric (a principal component of curry) and cardamom.

Worldwide, it is one of the most important and valued spices.

Every autumn when the weather turns a little cold and the locals begin to sell their pumpkins and Indian corn, the kids and I dig up some ginger root (or buy some) and grate the fresh root to make gingerbread cookies. The kids love the spicy-sweetness the root lends to the cookies, and I like the fact that just eating a gingerbread cookie can settle my stomach and relax me. Family and neighbors each get a bag of freshly baked gingerbread, complete with raisin eyes, and orange zest icing, and the house smells yummy for days. The extra ginger will be used as an added spice in stir fry, tea, and Kombucha Ginger Ale (a fermented tea that tastes similar to cider). And if we have an extra root, it gets shoved into a pot of damp soil to sprout and multiply until early Spring when it might be planted under the swamp cooler or AC unit outdoors, where the wind can blow the aromatic scent of ginger across the yard.

When I lived in Papua New Guinea, amongst the tribal people in the jungle, ginger root was frequently used by those suffering with malaria. The people said that it helped to lower the fevers, and reduce the nausea and achy symptoms that accompanied the sickness. Whenever sugar was available, the Kumboi people would cut a slice of ginger, toast it over the fire for a few minutes, and then dip the ginger root in a bowl of sugar to make a sweet and spicy treat for themselves.

A ginger-flavored liqueur called Canton is produced in the Guangdong province of China.
Green ginger wine is a ginger flavored wine produced in the United Kingdom. Ginger is also used as a spice added to hot coffee and tea.

In Japan, ginger is pickled to make beni shoga and gari, or grated and used raw on tofu or noodles.

In Western cuisine, ginger is traditionally restricted to sweet foods, such as ginger ale, gingerbread, ginger snaps (a type of cookie), ginger cake and ginger biscuits.

In Myanmar, ginger is used in a salad dish called gyin-tho, which consists of shredded ginger preserved in oil, and a variety of nuts and seeds.

In traditional Korean Kimchi, ginger is minced finely and added into the ingredients of the spicy paste just before the fermenting process.

In India, ginger is used in all sub-varieties of the Indian cuisines. In south India, ginger is used in the production of a candy called Inji-murappa (“ginger candy” from Tamil). Additionally, in Tamil Nadu, especially in the Tanjore belt, a variety of ginger which is less spicy is used when tender to make fresh pickles with the combination of lemon juice, salt and tender green chillies.

How to Use Ginger Root

Tea for chills, colds, nausea, circulatory stimulant, tummy-ache. Ginger tea is also great for healing the female organs after birth and/or surgery. Ginger tea is so effective against ailments of the reproductive and digestive systems because it stimulates circulation and supports a good blood supply to these organs. Add 1 - 2 slices of ginger root to a cup of water and simmer for 10 minutes. A pinch of cinnamon or a squeezed lemon can be added. Add honey for sweetener.

Massage Oil for aches and pains, and circulatory stimulation: add 5 - 10 drops ginger oil to 25 ml of olive or almond oil. This also combines well with juniper or eucalyptus oil.

Ginger Syrup for coughs, colds, tummy-aches, apply topically to infected wounds:
Honey offers its own range of health benefits to ginger, especially if the ginger can be low-heat-infused into the honey. Besides enhancing the flavor, preservation, and variety of applications for ginger, honey possesses its own range of antibacterial, anticancer, anti-fungal, wound-healing, and anti-ulcer properties.

Add one part of peeled fresh ginger root, grated or juiced, to three parts raw honey and let sit in warm spot for 24-48 hours. I leave mine on top of my electric stove or in the oven with the light on. This low heat allows the ginger to release its oils without overheating the honey. Strain and store in the fridge. Warm gently and slowly for syrup taken orally (or eat with toast!), or apply as a thick paste to topical wounds.

Ginger root is not really a root at all; it is a rhizome or underground stem. Ginger is a slender perennial reaching 24 to 39 inches in height. Its first stems are longer than the second and latter stems and bear beautifully fragrant flowers which are greenish-yellow and streaked with purple. The leaves are a dark green with a prominent midrib that is sheathed at the base, and the seeds are found in the rare fruiting body.

Ginger prefers rich damp soil and warm weather, but can tolerate a light freeze. You can buy a ginger root in the grocery store and push it into the mud of a damp area near your house, and soon it will send up shoots and multiply. It is ready for harvest about five months after planting.

The early harvests are used for ginger syrup and candied ginger. The later harvests are usually sold as fresh ginger. It becomes hotter and spicier, and better for homeopathic remedies, the longer it is in the ground. Dried ginger is ground up into a powder and used in curries, spice pastes, and as an herbal supplement. The root can also be frozen and used throughout the winter to cook with. It is easy to grate or chop even when frozen.

Ginger is known to help motion sickness (some even say it rivals the drug Dramamine), upset stomachs, headaches, congestion, and lowering fevers when added to the bath water. Other benefits include cleansing of the colon, reducing spasm and cramps, stimulating circulation, and aiding the metabolism. Ginger is also used by many as a mood enhancer, or aphrodesiac, possibly because of the cineole content, which contributes to stress relief, and the increased circulatory response, which raises oxygen levels. Ginger is known to contain many powerful antioxidants.

It is good for the gastric system because it increases the pH of stomach acid, reducing its acidity, which in turn lowers the rate of gastric secretions, and increases digestive enzyme activity. Although very effective against all forms of nausea, PDR health officials do not recommend taking ginger root for morning sickness associated with pregnancy, although millions of Chinese women traditionally eat ginger root during pregnancy to combat morning sickness. Ginger can also be used to prevent scurvy.

Ginger has been shown in research to help regulate the natural inflammatory response of the body. There are several studies that demonstrate very positive results on minimizing joint pain from arthritis and other inflammatory disorders.

People frequently subject to blood clots are generally prescribed oral anti-coagulants to help keep their blood relatively thin. One of the most commonly used medications for this is Warfarin Sodium (better known as Coumadin). Unfortunately, it’s also used as a potent rat poison and can lead to serious internal hemorrhaging over an extended period of time. Ginger root is an ideal replacement for such synthetic blood thinners. An average of two capsules twice daily in between meals appears to have helped a number of those with such problems. Ginger Kombucha (check welltellme.com for a recipe) should help significantly in cleansing the liver and restoring vascular health. Diet and exercise also contribute significantly to vascular health.

The characteristic odor and flavor of ginger root is caused by a mixture of zingerone, shoagoles and gingerols, volatile oils that compose about 1%–3% by weight of fresh ginger. The gingerols have analgesic, sedative, antipyretic, antibacterial, and GI tract motility effects. Cooking ginger transforms gingerol into zingerone, which is less pungent and has a spicy-sweet aroma. None of these pungent chemicals are related to capsaicin, the principal hot constituent of chile pepper.

First you must find, or buy a Kombucha mother. You can sometimes find them for sale on Ebay. Posting a “wanted” note at the local health food store is probably the cheapest and best bet. A Kombucha mother is a mushroom-like bacteria that contains glycuronic acid, the same type of acid your liver uses to purify itself, shed toxins, and purify your blood. Drinking kombucha tea is very good for liver health, but it also tastes great, and will give you lots of energy!

You may also download the PDF version of this article to print or save for later reference.