By No Greater Joy Ministries
September 16, 2011 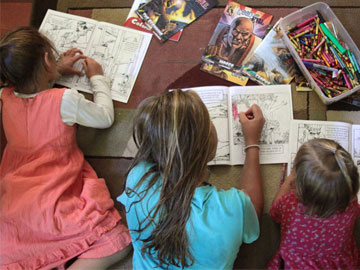 The answer to this week’s Bible questions was: Job and the passage was Job 42:10—17, and the winner is: Jessica Prindler! We had such an amazing amount of responses—it was such a blessing. Be sure and look for the next quiz on Tuesday!

On September 12th, Fox News ran an interesting story about the effects of fast-paced, fantastical television shows on a child’s ability to solve problems and follow rules. It even considered the possibility that such shows cause behavioral problems. Surprised? No way. I am just surprised someone finally scientifically figured it out. The conclusion from the researchers was to advise parents “to consider the[se] findings when making decisions about which television shows to allow their young children to watch—If they watch TV at all.” After the shocking findings they recommended that parents use creative learning activities such as drawing, building blocks, and playing outdoors.