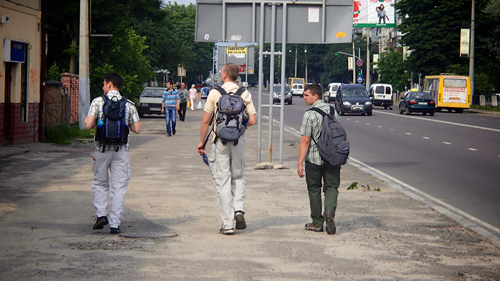 CMO 2013 has now begun, and Week 1 is already over! The first three men on this year's team arrived on June 12. They are Isaac Coltrain, Paul De Luca, and Nathan Gregson. Additionally, we are very pleased to be welcoming veteran missionary Dan Bardwell to this year's CMO team, as well as Danylo Medyakovsky, the son of a Ukrainian pastor at our church here in L'viv.

On the morning of June 13, we all set off for the Carpathians to distribute invitations for our first film showing, scheduled for the following Sunday. Our destination was a small village called Tyushka, located in the Zakarpatska oblast. Having been in the country less than 24 hours, the new CMO men learned a few essential Ukrainian phrases as we pulled into the village, and were then sent out to invite the locals to the showing. (We don't waste any time here at CMO!) Everyone on our team walked through the village, placing small film invites on gates, and hanging color posters on store fronts and telephone poles. A couple of hours later, we were finished and on our way back to L'viv.

Over the next two days, the men received their orientation training, readied their gear for the weekend outreach, and even got a taste of urban tracting in L'viv.

Sunday morning, we all piled into the van and headed out once again for the mountains. When we got there, we were initially dismayed to learn that there had apparently been a major miscommunication. The village was right in the middle of a high school graduation using the very facilities where we were supposed to show the film! Happily, the school director was cordial and agreed to reschedule the showing for the following week.

In the end, the entire CMO team was invited to join the students and teachers for their graduation banquet! The students demonstrated some Ukrainian folk dances, and we introduced our team and explained in more detail about the film.

Despite what first appeared a disappointing cancellation, God used this situation to open new doors in Tyushka, which turned out for the best. We were able to get to know the people better than we had hoped, and we believe that God will use this foundation for His glory when we return for the film showing on June 25th.

How You Can Pray