Filter by:
Blog / All / Euro Team Outreach, Week 2: Success in Tyushka at last! 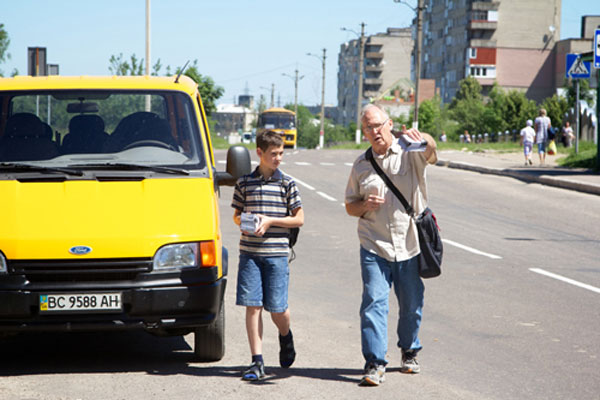 EDITOR'S NOTE: Though not referenced directly in this report, the team's first literature outreach of Week 2 was a day trip to the city of Novovolynsk during which 6875 invites were distributed.

The second week of CMO 2013 ended Tuesday, June 25th. There were a multitude of trials, hardships, blessings, and comforts that the CMO team encountered as they distributed correspondence invitations in L'viv and surrounding cities. One of the hardships the CMO team was faced with was the lack of one of its key members, Joshua Steele, as he fell ill and was not able to work with the team during Thursday's literature distribution. However, Joshua recovered quickly and was able to rejoin the team the following day.

The lack of one team member was not enough to stop the rest of the CMO guys from distributing a staggering 12,750 correspondence invitations in the city of Drohobych. In the end, with the blessing of God, the CMO team passed out a total of 35,675 correspondence invitations during the week. This literature was given to the people from Wednesday, June 19th, to Saturday, June 22nd, during which time ETO received its first requests of more information regarding its Bible correspondence course. These requests came from places CMO had handed invitations out only days before.

After working hard the entire week, the team was able to enjoy some much needed RNR. Because of our delayed film showing (see Week 1 eReport) the team was able to attend church in L'viv. After church, the team gathered at the Ministry Center for dinner and fellowship. Afterward, everyone returned to their homes to prepare for the long journey back to the Carpathian Mountains.

The CMO team departed from L'viv, Monday, June 24th at 10:30am and arrived three and a half hours later at the first of two villages where film invitations were to be passed out in. It took only a few minutes to stamp several hundred invitations with the date and time of the film showing, after which the team split up into groups of two and headed off in different directions. The same process was repeated in the second village.

EDITOR'S NOTE: The two villages referenced above are Torun and Lopushne where we plan to show the film this coming Sunday.

Once the last of the film invitations were distributed the team had to find a place to camp. After talking with one of the villagers it was decided to make camp on the edge of the stream the ran through the village.

The next morning, after breaking camp, the team headed for the village of Tyushka, where we were supposed to have had a film showing the week before. We arrived at the school where the film showing was to be held at 12:30pm. After setting up the equipment we waited for our audience to arrive. The showing was scheduled for 1:00pm but at 1:15pm there were still no villagers. It was almost decided to pack things up when the first villager arrived. The film was started at this point, and in the end there were twenty five villagers that attended the film showing. After the showing Joshua gave a short Gospel message, and Bible First! starter packets were handed out. The team then packed up the equipment, loaded it back into the van, and started the long trip back to L'viv.

How You Can Pray