This is the newsletter that is sent to our monthly supporters describing the eternal impact their gifts make. We thought you would also enjoy seeing how God has been using the gifts given to No Greater Joy! 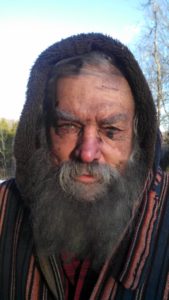 This is coming from my (Debi’s) desk rather than Mike’s because he has been occupied twelve hours a day, six days a week on a new ministry called The DOOR. When he gets The DOOR finished (which we hope happens before the end of February), he will be teaching the Bible one night a week, and we will be streaming it live. I’ll tell you more about it as we go along. I am including this picture I took yesterday when he came home after painting the ceiling. He is now 70 years old and he was on high scaffolding. He did not know he looked like this when he went to buy another 5-gallon bucket of black paint at Walmart. He said he never had so many good-looking girls look at him. For those of you who know and love Mike, you will appreciate this picture.

Now, on to our update of what has been going on in January . . .

Our year started with a twenty-year dream come true. In January our son, Nathan Pearl, traveled with three other men including his pastor from Kauai (Hawaii), to a mountaintop in Papua New Guinea (PNG), where he reconnected with the Kumboi people. He was just seventeen years old when he made his first missionary trip to PNG twenty years ago. At the time, his older sister, Beka, was a linguist working among this extremely remote people group. Mike and I sent her brothers in turn to stay on the mountain with her so that she would not be alone. The tiny Kumboi people were kind to them and welcomed the strange, young, very tall white people. When he was nineteen, the locals stood Gabe up against a tree in PNG while one of the men climbed the tree to hack a mark proving to others how tall the white boy was. They called him “the stick.” 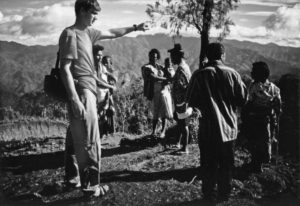 After a few months of working among the Kumboi people, Beka made a radio call to her Daddy and said, “These people need a picture book of the Bible. They don’t even know the world is round so they certainly have no idea of who God is. They need the whole story of God working among people in a picture-book form. Even more important than that, the whole island of Papua New Guinea needs a Bible in their language. All they have now is odd pages of a badly translated Catholic version. It was put together with glue and glue does not work on this wet island, so no one has a whole book.”

Her call sent us into a frenzy of work. We contacted several missionaries who had been translating the Bible for years (one man had worked thirty years translating, but could not find anyone willing to pay for the printing). They worked together on the web and pulled together a Bible in the trade language. It was the donations of No Greater Joy readers that provided the money to print and ship 20,000 Bibles to PNG. This is the Bible (or reprint) everyone there uses now.

Then Mike started to work on the Good and Evil book. It took seven years to write, draw, shade, color, and produce the book, and another nine years to translate it into 45 languages, all of which are now available free on the Web. We had no idea that it would be twenty years before the Kumboi people would have their very first copy of Good and Evil. 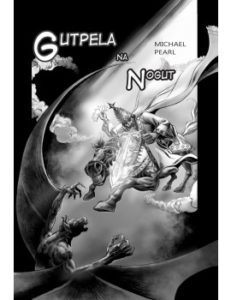 We received word today that the men had flown to the treacherous, primitive landing strip halfway up the mountain. Then they climbed and sometimes hand-crawled up the slippery mud for over eight hours, each man carrying a heavy load of Good and Evil books. The Kumboi people met them on the path, recognizing Nathan after all these years. Nathan had the great privilege of handing them the first copy and saying, “We told you we would be back and would bring you the picture-talk book that teaches what God has done. We have brought many books so that you can carry them to the far parts of the mountain and show everyone who God is.”

Your generous gifts directed to the Good and Evil project printed the books they gave the Kumboi people. Your gifts to iMissionaries told the story in PNG to anyone who had access to smartphones or the Web. Your gifts to General Missions paid for some of the travel expenses for this trip and will help create a YouTube video so others will hear the story.

I encourage you and your children, your Sunday school class, and/or your church to watch the amazing PNG story that Nathan told in his church the Sunday before they left for PNG.

In the month of February, we will be helping a brother missionary (Rick) fix his damaged rental property here in the States. WHY? Rick called from the Philippines and explained to Gabe, our son, that after ten years, his renter had moved out and left the house a wreck. He asked if Gabe could get a crew to fix it so he (Rick) didn’t have to leave the mission field. 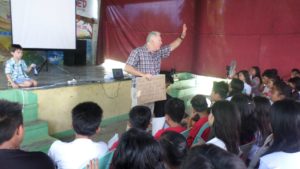 Gabe asked Rick, “What did you do today?”

Rick replied, “I went to a public middle school that has 80% Muslims and preached the gospel to over 300 students, gave away dozens of Good and Evil DVDs (a seven-hour animated movie) and five Good and Evil illustrated Bible storybooks.”

Gabe asked, “What will you do tomorrow?”

Rick replied, “I am going to the high school section of the same school.”

Finally Gabe asked, “And what did you do yesterday?”

Rick sealed the deal, “I went to the younger grade school first.”

Gabe told him, “Yep, I don’t want to go to Muslim schools in a third-world country, so I will get a team together to repair your house, which I know helps support you while you minister.”

Your gifts to General Mission will help fund this project. Rick has been faithful in giving millions of cups of living water to students in the Philippines. When you support him you too are a part of  giving the water to those who have never heard.

“For whosoever shall give you a cup of water to drink in my name, because

During March we are praying about an outreach to Cambodia and the surrounding countries. Start praying with us for thousands of miracles. As God wills and provides, we will use iMissionaries, gospel boxes, and 10,000 Good and Evil books translated in the Khmer language (spoken by 16 million people) to reach out to the Cambodian natives. You can follow us on Facebook as we post updates for people to pray for this project. Connect to NGJ Facebook.

Our goal is to have The DOOR outreach ministry in full swing very soon. More information coming