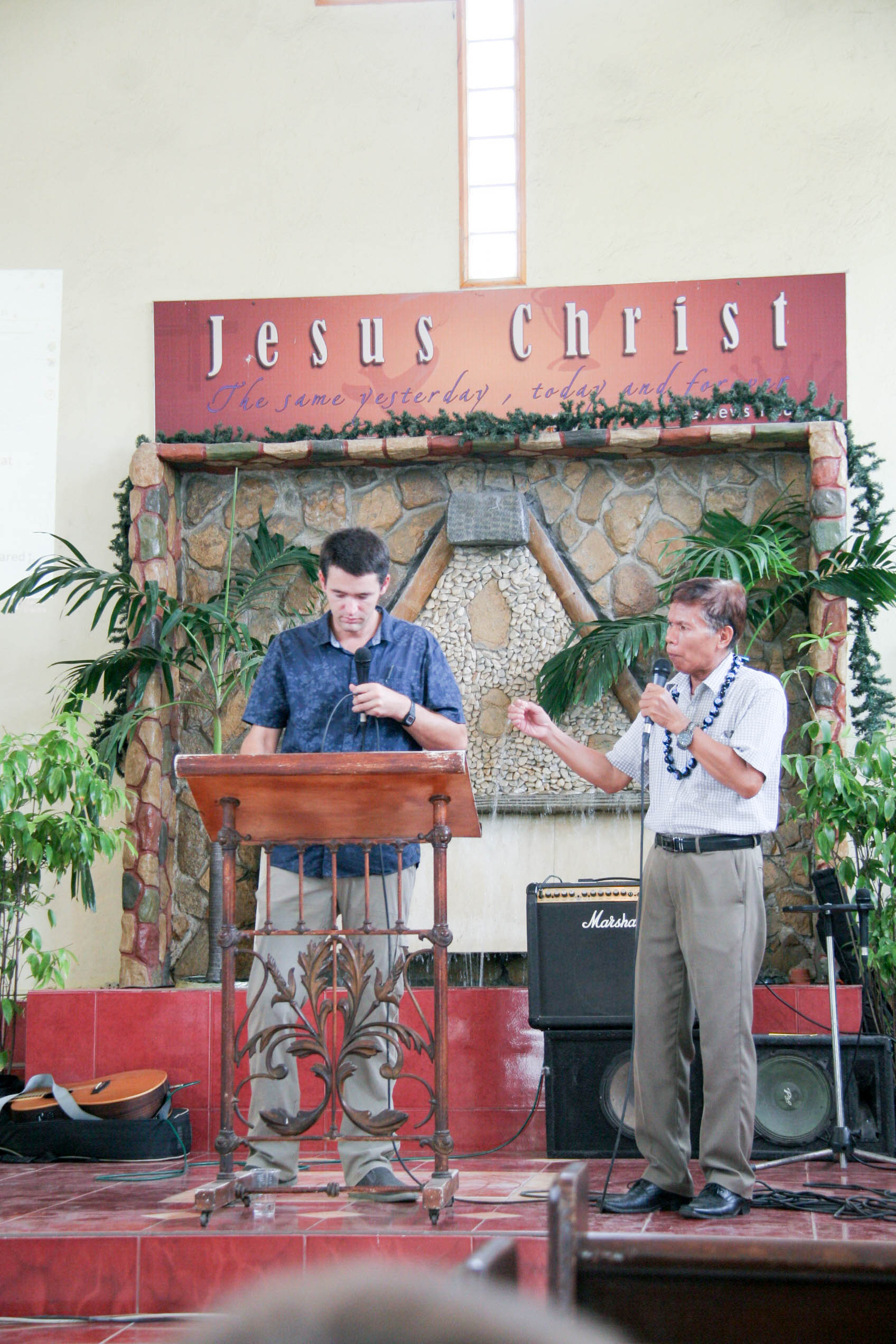 The Lord gave the word: great was the company of those that published it. Psalm 68:11

My family and I just got back from a one-month trip to the Philippines. Many of you gave to support this work, and we were so humbled and excited to see what God did through your gifts.
We approached this trip as three different ministries we would pursue simultaneously. The first was to feed the hungry kids. Now, from the outside, feeding kids does not seem to have much eternal value because in a few hours they are hungry again, but in Matthew 25:34–40 we see the importance of sharing Christ’s compassion in meeting the physical needs of “the least of these.” 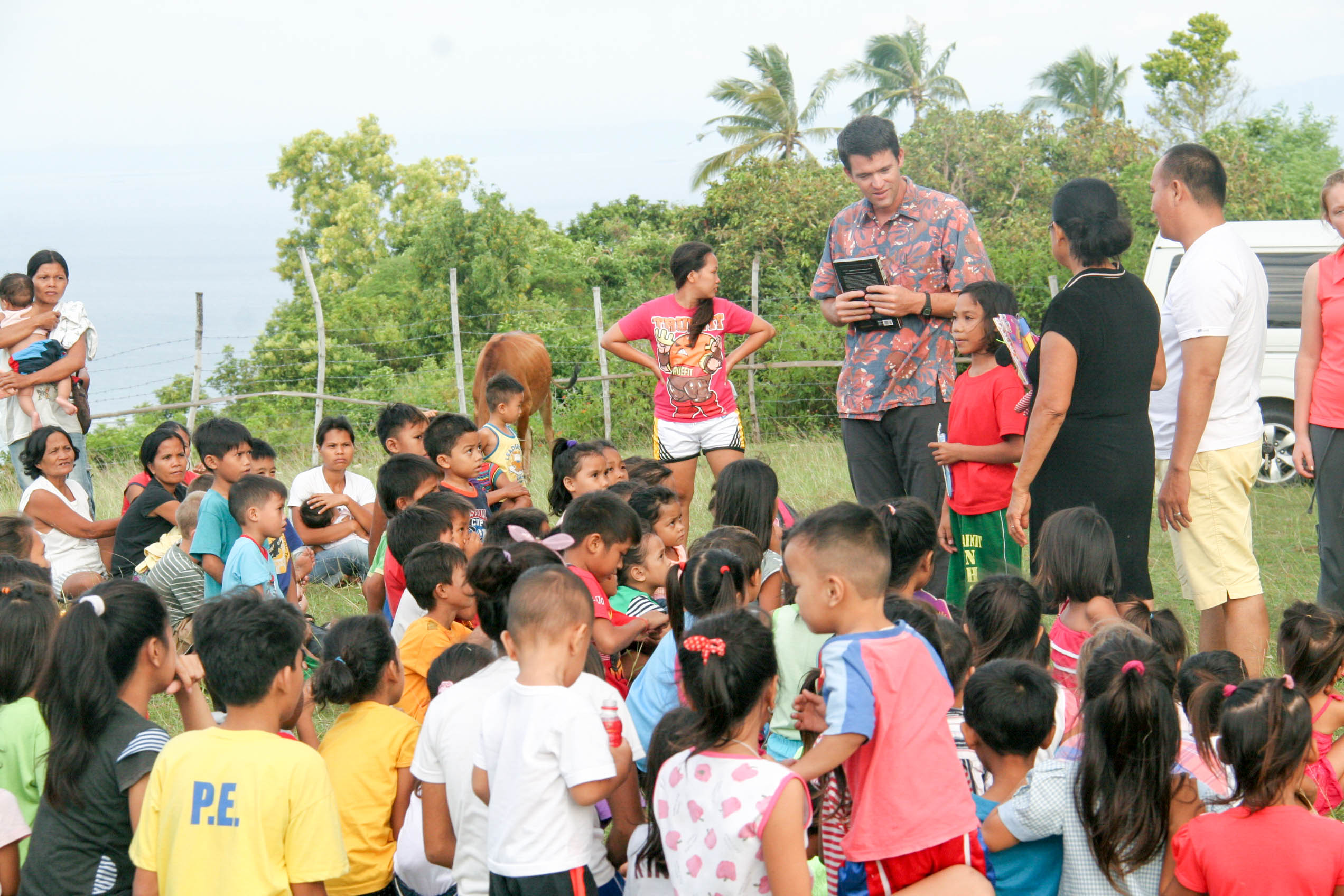 The next ministry was to deliver the Word of God in such a way that it made as big an impact as possible. Because of the generosity of God’s people, we were able to take over 2100 Bibles in the Filipino language, and by combining them with our teaching ministry, we were able to get them into the hands of over 225 churches. Now, if you have done the math that is fewer than ten Bibles per church, which may not seem significant, but let me relate to you one of the many stories I heard from the churches that received them.
One of the churches represented at the last conference was planted by a family who worked with the poorest street kids. They moved in and started winning many for Christ. They tutor struggling kids after school and go to sporting events with them. Kids are in and out of their house all the time, where they try to talk the girls out the life of prostitution that their parents are pushing them to join, and the boys out of running drugs at 10 and 12 years old. Over the last year they have been discouraged about their own poverty and lack of resources. As some of the kids and their parents have come to know Christ, they have started Bible studies, but they only have one Bible. As she clutched her precious stack of nine Bibles, the mom told me how encouraged and excited they were for the teaching, Bibles, and Good and Evil books we gave them. 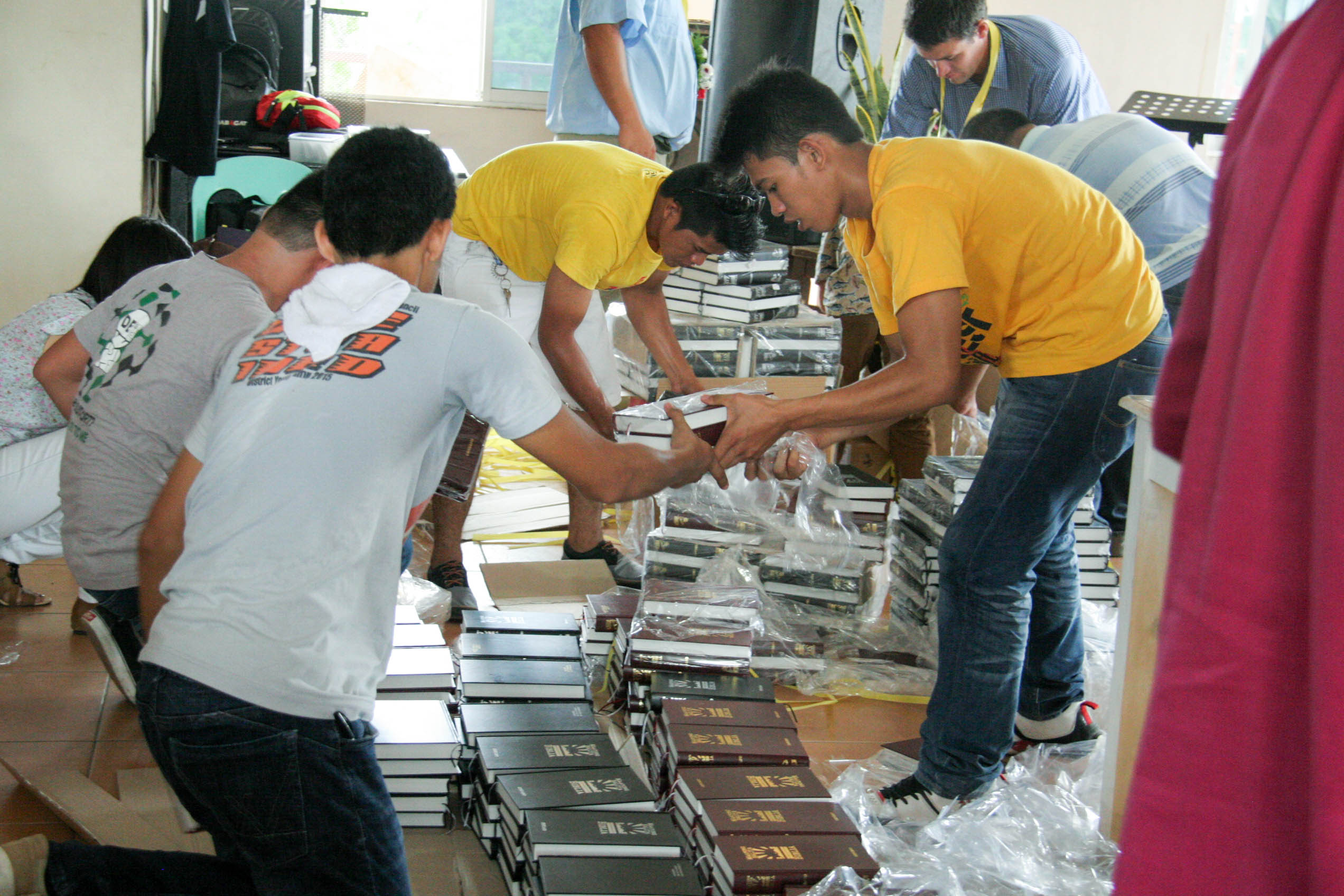 The third ministry we engaged in was teaching and giving the pastors tools for the work they were already involved in. I fully believe that if the Philippines will be reached for God it will be the Filipinos who do it. That is why my work is not just evangelism but teaching the Word of God to the faithful men who will still be doing the work of evangelism long after I am gone. It is because of this that I am so excited about the Good and Evil program worldwide. You see, I can give out tracts and preach the gospel, but if I can teach a teacher and then give him the resources to win and teach more effectively, the impact increases exponentially! That is why Paul told Timothy “And the things that thou hast heard of me among many witnesses, the same commit thou to faithful men, who shall be able to teach others also” (2 Timothy 2:2). During our time there we had three pastors’ conferences with around 200 people per meeting. At each conference I had the privilege of teaching three times. 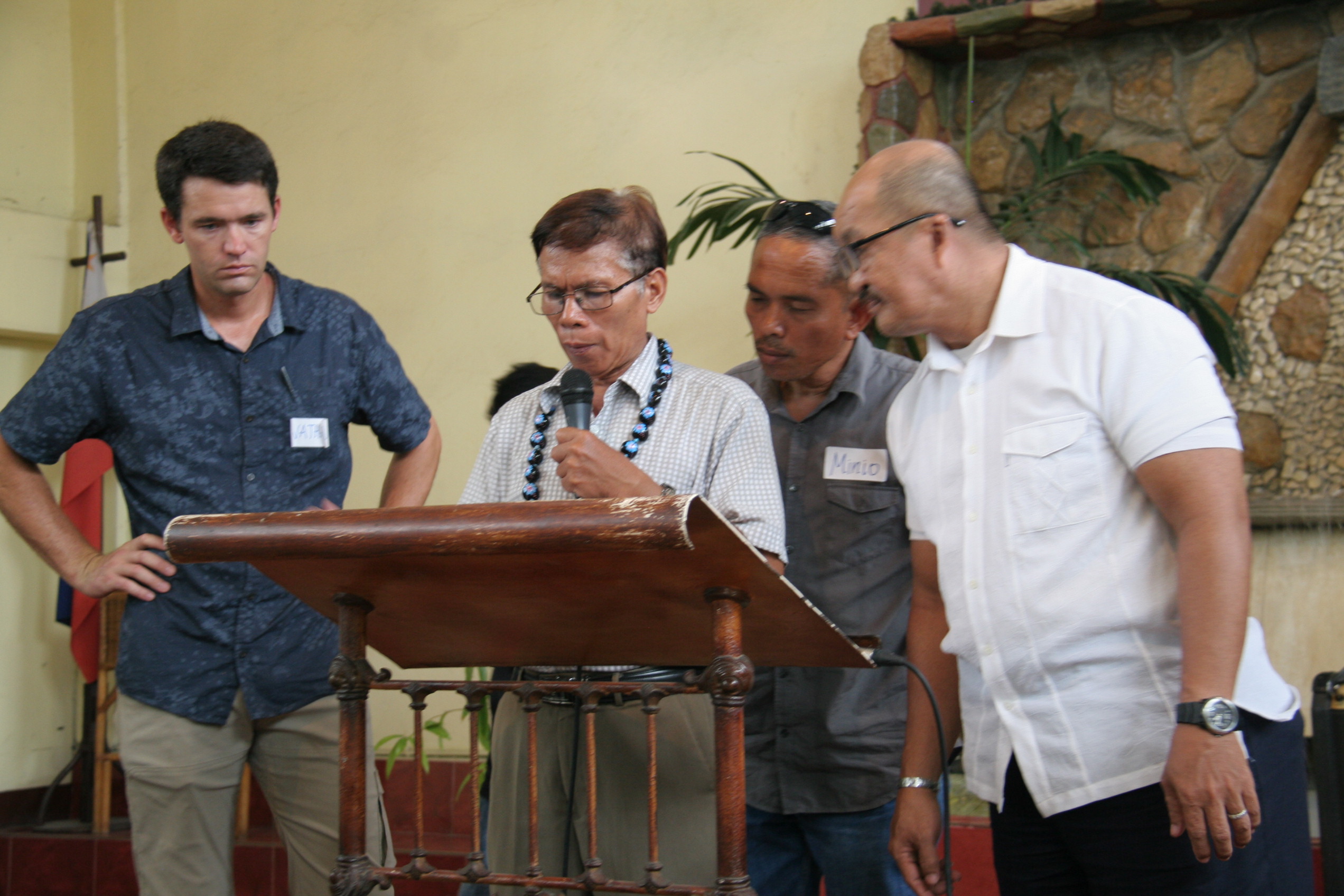 Imagine a relatively small room filled with men who are already planting, teaching, and overseeing churches. Most were from evangelical, Christian backgrounds, but there were also Mormon, Catholic, and others who did not know Christ. In the front was an over-loud and cheap handheld microphone sitting on a rickety wooden podium, flanked by boxes of Good and Evil books and Bibles we would be giving away. Outside the temperature was 92° at 9 am and climbing; inside the temperature was 95° and climbing faster, and there was almost no breeze through the small open windows. And the best part, no one knew who I was. Everyone came to hear the lady who invited me or because they heard we had a free lunch. As I looked around I was thinking, “This is the most exciting and wonderful opportunity I have ever had to teach!” I felt like I was eating the same kind of bread Jesus ate as he sat by the well talking to the Samaritans.
After introducing myself, the first message I taught was on Biblical marriage. After speaking for a couple hours, I sat down and we took a break. Many of the pastors and teachers came to me and said they had never heard marriage taught purely from the Scriptures. They were convicted, excited, and confounded by a method of teaching using only the Word of God. Next, I taught on the hope that we saints have in Christ. Once again, many came to me after this message and were excited by sound, exegetical Bible teaching. I love to preach the Word of God, and the first two messages were exciting, but I knew that to make the return we hoped on the investment we had made in the Good and Evil books, I needed to be able to help them understand the power of chronological Bible teaching. 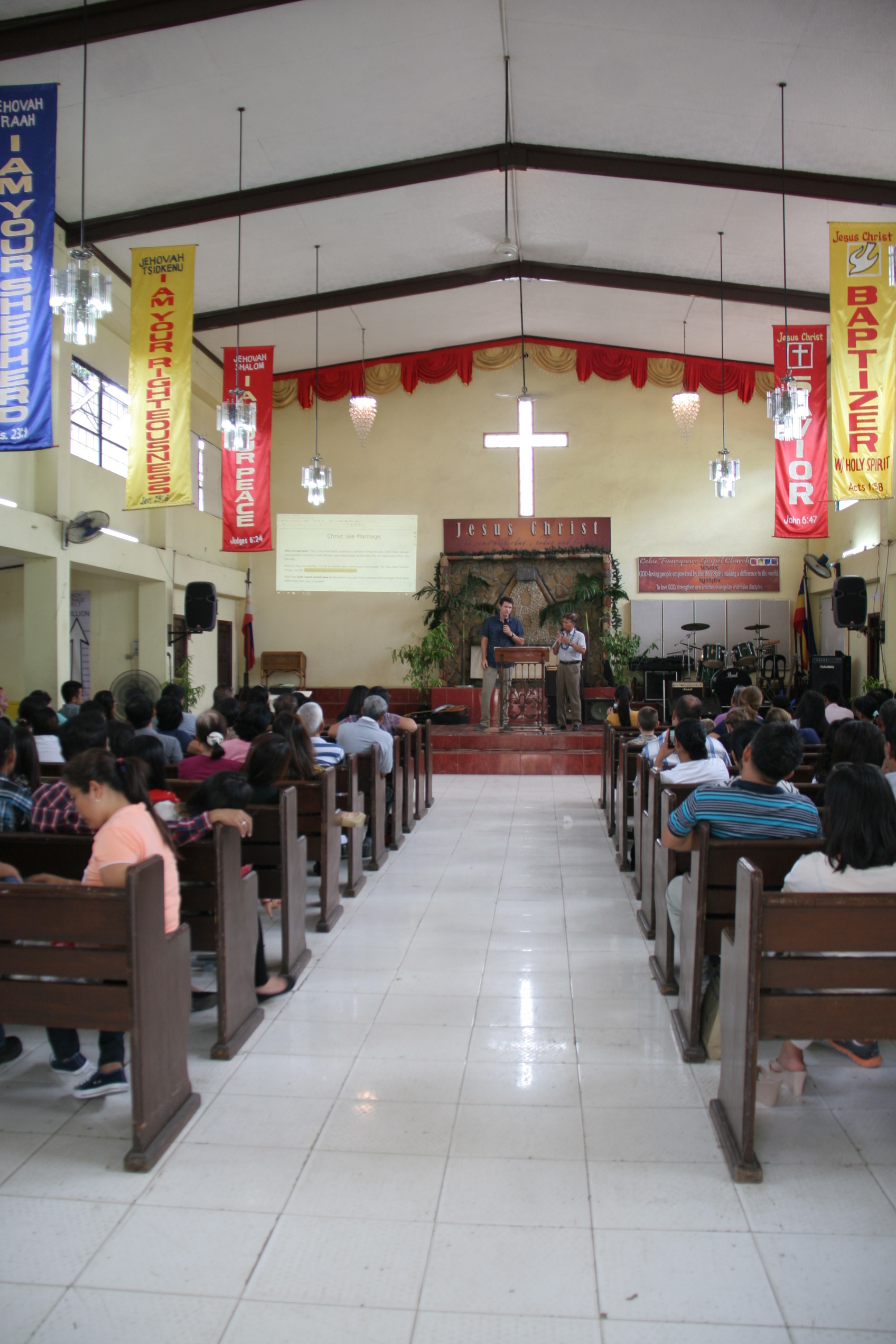 At the beginning of the last message I went to the front, opened a box, and got one of the Good and Evil books in the Cebuano language. At this point most had no idea what was in all the boxes. I held it up, showed them some of the artwork, and told them that I would like to explain to them the value of chronological Bible teaching in our churches, but I was just not sure how to do that. So instead, I told them I would tell them the story of the Bible, just like my dad had done with the Good and Evil book. I started in Genesis and told the story of Adam and his sin. Then I told the story of Cain and Abel and how Abel’s blood cried out from the ground. I told of Noah’s sacrifice and how the Scripture says that blood is required for the remission of sins. After that I told about Abraham and Isaac and how through that story we are able to empathize in horror of being asked to offer our only son as a sacrifice. Then I explained imputed righteousness and how, as Isaac lay on the altar waiting for the knife that would take his life, God provided a lamb that would die in his place, whose blood would be shed on Isaac’s behalf.
By this time in my sermon, I looked out over the sweaty crowd of pastors and saw many openly weeping. Some told me later that this was the first time they ever understood how the stories of the Old Testament matter to us today. I went on to tell the story of the first Passover and how the blood being applied to the doorpost was accepted by the Spirit of God as imputed death. Then I told the story of Jesus and I read Isaiah 53. As I looked across the crowd I could see the understanding of what Jesus had done dawning on their sweat-slicked faces. I explained again imputed righteousness, slowly and carefully, in light of the Old Testament stories we had just heard. I told them I wanted to give them this book that would expound on these stories and many others in a simple way, so that they in turn could teach the Old Testament with power. 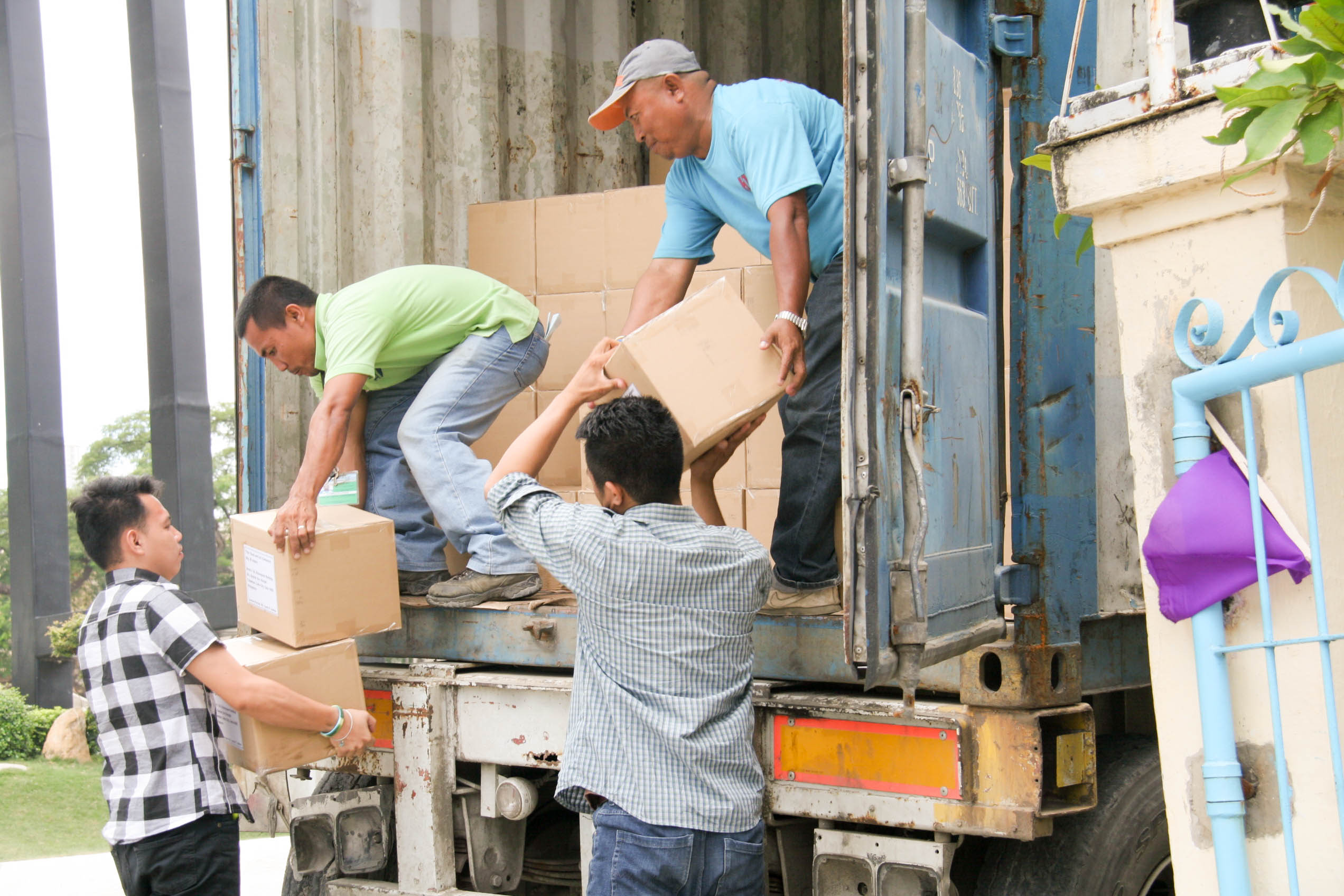 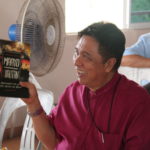 As we closed with prayer it seemed as though all eyes, many still wet with tears, were fixed on the stack of books. They were excited and ready to use these as teaching aids in the outreach that they were already doing. So we counted all the churches represented and determined that each church would get around 30 Good and Evil books. As we handed them out, I spoke to many men who said they would be teaching through this in their church and using it in their Bible college. I spoke with men who had been to Bible college in the US, planted dozens of churches, and even presided over Bible colleges of their own who told me they had never understood the Scripture as clearly as I had presented it with a few simple Bible stories. I believe the books we gave away, the messages we preached, and the churches we prayed over will go on to make a great impact on the islands of Leyte and Cebu. It was so exciting to see the hand of God clearly at work. It was so humbling to be allowed to be a part of that. It was through many of your generous gifts that we were able to give books to these pastors, but while we were there, we drove past so many churches, so many people, to whom we could not give anything. There is still so much work to do.

Thank you all so much for your part in this, and pray for us as we continue to publish the gospel in all the world.