Filter by:
Blog / All / iMissionaries: A Record Response From Muslims During Easter

iMissionaries: A Record Response From Muslims During Easter 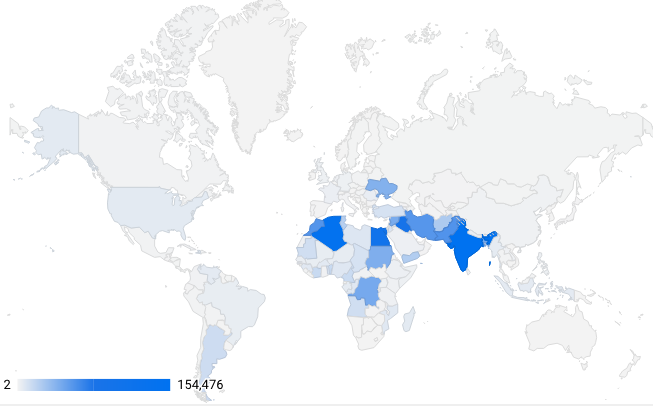 Thank you for being an iMissionary! People all over the world are getting touched by the gospel thanks to your contributions. Read on below to hear some of the stories. But first, here's a snapshot of what you helped us accomplish last month:

We use 100% of the funds you donate to buy ads through Google and Facebook offering a free download of the Good and Evil comic book Bible in over 30 languages. Most of the people we are reaching are in nations that are restricted or hostile to the gospel.

There's a paper tacked on the wall above my computer desk. It is a print out with a number on it in large text, that is the record number of people we have reached with iMissions in a single week. Every day when I arrive at the office, I check the numbers to see if we've beat the record this week. I had to update my numbers several times in April, printing out a new copy of the paper, as the old records were shattered. The current record for the most visits we've ever gotten on the site in a single week was April 10th-17th (Easter Week), when 362,157 people visited the site. That's over 50,000 people per day!

Most of these visitors were Arabic speakers from across the Middle East. They are mainly Muslims who have had little to no exposure to the gospel. But as Easter was being celebrated in other places around the world, they became curious. Maybe they heard it mentioned in a news broadcast. Maybe they have business associates from other cultures. But when they saw our ads about Jesus, they decided they needed to know more about this man that they've been taught to honor as a prophet. Who is he really? How did his life really end?

Thanks to the marvels of modern technology, in that moment of curiosity, you and I could be there to digitally give them a copy of the Good and Evil comic book Bible. A copy they can download to their smartphone and read without drawing the attention of the authorities, or even friends and family, who might stand in opposition to the gospel.

You see, I have another paper pinned up on my wall. It is a map that highlights the countries where obtaining a physical copy of the Bible is difficult, dangerous, or illegal. When I look at the map included in this email (above) that highlights where we're getting the most downloads, it matches pretty closely with the map on my wall. The people that we are reaching are mostly in places where they would never otherwise have an opportunity to know the stories of the Bible. But now we've given them an opportunity to read them in an illustrated format that even children can understand.

And they are reading. On the 21st I received an email from a man named Ammar, from northern Sudan. He wrote in Arabic saying that he had read the download, and then the Bible, and wanted to be baptized and profess his faith in Christ. He spoke of how he lives in a very hostile and volatile place, where he doesn't know a single Christian. Please join me in praying for Ammar and the thousands of others like him, that God will guide him to other believers who will teach and encourage him.

We currently have about $2,000 in our fund for the coming month, but expect to spend around $25,000. It is donations from people like you that will help make up the difference. If we come up short at the end of the month, we'll cover the rest with money from our general ministry fund. We don't know how many months we can do that, but we also don't know how many months it will be until our ads get shut down or Jesus comes back, so we intend to keep blasting these ads around the world until my payroll gets put into the pot and we have nothing left.

Your prayers and donations help us stay faithful in this work until he comes. Thank you.