Filter by:
NGJ Magazine / Articles / A Mother Asks
Do you get our FREE Magazine? 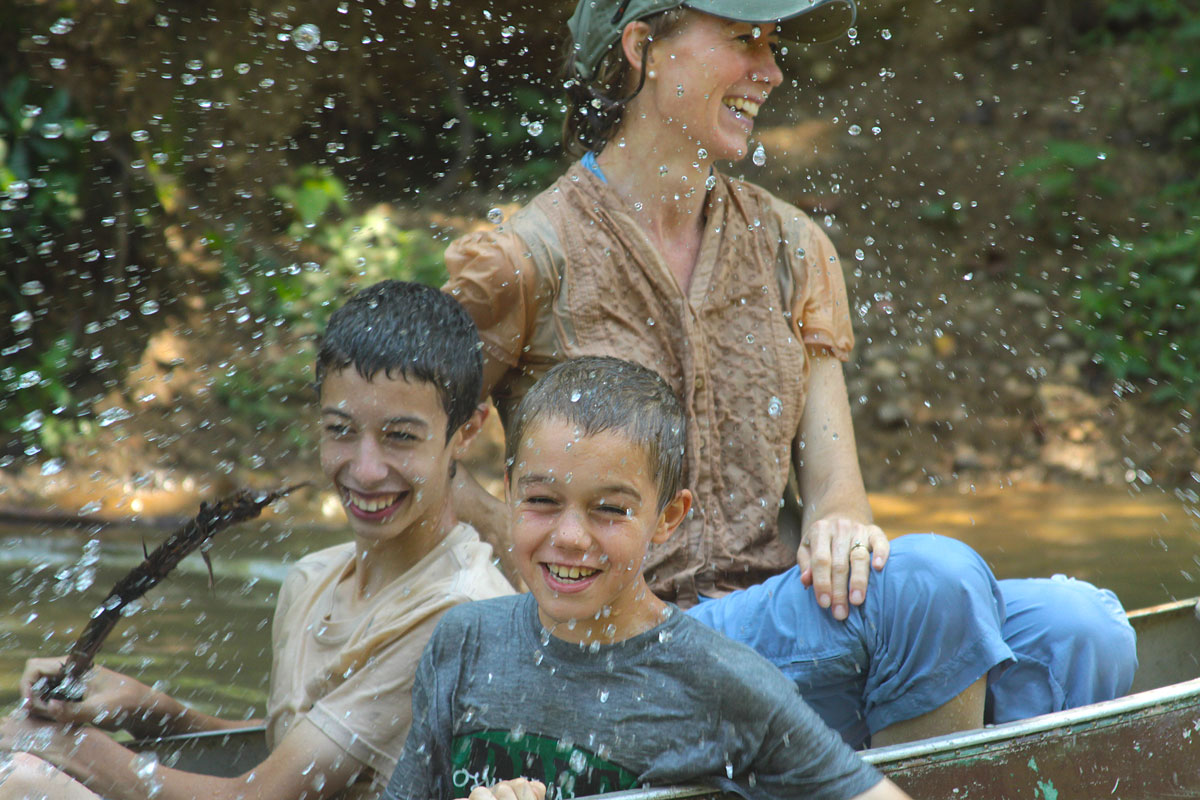 Our son is seven years old. As soon as church lets out, the boys, young and old, are running around on the deck, out in the street, jumping on each other, and many times the “play” gets out of hand. In recent weeks things have escalated into what can almost be described as full-fledged gang war between the older and the younger boys. The older boys taunt the younger ones; the younger ones start chasing and jumping on the older ones, and someone gets hurt. We seem to be the only ones at our church that show any concern over this situation.

Many times we find ourselves intervening. Two weeks ago after an evening meeting I came around the side of the church building to find a group of five 10-13 year old boys around our son with one of them holding my son’s neck from behind and smashing his face into the wall. The “mama bear” definitely came out in me and I jumped in. The older boys stated that our son had been jumping on them, etc. (which our son did confess to) but in retaliation our son had been ruffed up pretty badly.

I read with much interest “Sorry, I’m tied up at the moment.” Both my husband and I were raised with certain expectations of decorum around “grown ups.” Although in an informal setting such as camping I understand that it can be great fun where these lines become relaxed. We were a bit undone one night when we had our pastor and his wife over for a visit, and our son ran in the room, jumped in the pastor’s lap and started tickling him. We realized this is an area that we need to do some training, but with the situation at our church where younger boys are dukeing it out in the street after church with man-size older boys, it’s hard for our son to distinguish where to draw the line.

I’m sorry to have been so long-winded about this, but our situation seems so different from what you described in either “A whole Boy” or “ Rowdy Boys.” Our son is a boy that can sit still for hours. One of his favorite things to do is sit and have me read to him. He often begs for me to read “just one more chapter” long after my voice begins to wear out. We live on two and a half acres where he has all sorts of room to run, we have pigs and sheep and a pony, but like I mentioned before I often have to encourage him to go outside or stay outside with us. But here recently, when our son gets around other boys he goes a bit nuts, me too. This has all come on us so suddenly that it has really caught us off guard. We would greatly appreciate any suggestions you have to offer.

Dear Mama Bear,
It is difficult to prescribe a singular solution. Based on assumptions I make from reading your letter, I will make some suggestions that may help you make some adjustments.

The way I understand it, there are several layers to this issue, making it complex. The situation you described after church is definitely an incubator for trouble. The church leadership should take steps to eliminate the marauding herds of developing male humans. You have no control over the church. If others are not bothered, there is nothing you can do to change the overall situation. Be careful not to become a meddling nag. As to your own part, leave immediately after the service and do not allow your son to roam. If you must stay, appoint a place for him to sit until you are ready to leave.

In this area your concerns are natural and justifiable, but, if I am reading you correctly, you have complicated the problems of male youth with a common feminine over-sensitivity.
If mama bears had their way baby bears would always be little biting bullies with no understanding of social give and take. Puppies, bears and kids learn not to bite by getting bit in return. Mamas who run interference for their little boys do two things: 1) they make weak sons, 2) they cause the other kids to continue picking on the ‘bratty’ little boy with the ‘meddling’ mama.

You mentioned his wild response when other boys come around. You are shocked at the recent change. Perhaps the change is shocking because a change that should have occurred gradually was suppressed until it burst forth suddenly. It sounds to me as if he is a late bloomer. My sons were delightfully wild by the time they were four. The only way you could get them to sit in your lap after they were five is to make them take their knives off (real knives), lay their BB guns down, and then forcibly wrestle them into your lap. Keeping them indoors was like trying to keep a dog up a tree.

If his boyhood has been subdued and is then suddenly released, it may be that neither of you knows how to handle it. Out of camaraderie, young boys will pick on older boys. The youngsters are honored when the older boys notice them. And then, it is such a challenge to test one’s mettle against a stronger opponent. It really makes a little kid feel big to bop a big guy and get away with it. If you will observe them, it is all done with laughter and great fun. But eventually the little attackers become a nuisance or maybe go too far with their ‘attacks’ and the big guys decide to teach them their place. The little guy may end up crying and tattling. If you are the parent of the big guy, you should rebuke him—lightly. If you are the parent of the little nuisance you should show no sympathy with his plight. Say something like. “Well, if you don’t want to get hurt, don’t play with the big guys.” If you sympathize with him, or if you become the head of his attack team by going on the attack yourself, you will encourage his uncontrolled behavior and you will make your son less popular, thus increasing his chances of his being the target of future attacks.

Kids and young people, especially those of the male variety, have this built in hormonal rush that makes them want to fly through the air, defy danger, go the limit. Kids can’t just lazily swing; they have to go as high as they can and then jump out. No boy is ever satisfied with the lowest branch on a tree or the first gear on a bicycle. Skate boards and roller blades are made to be hormone burners. Where there are two boys they will find two sticks and swing them at each other in some sort of imaginary contest.

When my boys were big enough to run, they would take their metal Tonka trucks, and holding them by the sides of the truck-bed they would run down the gravel driveway at full speed. And as if the loud noise of the rattling truck was not enough, they would imitate the sound of a jet airplane. Many a time I had to catch up to them and block their raceway in order to get their attention so I could demand a moment of conversation with someone standing in the yard. When I gave the all-clear signal, they would blast off down the driveway racing each other and banging their trucks together. They learned not to come to me with their bloody hands, elbows, and, occasionally, heads. I showed no sympathy with self-induced wounds. I made them to understand that it was part of the price that must be stoically bore by little boys who chose racing gravel trucks for sport or profit.

I love boys. I like them dirty, rambunctious, grinning, and spontaneous. Although little boys need to learn when and where their exuberance is appreciated. As a pastor, if I were visiting in a home and a little seven-year-old jumped on me to tickle me, I would appreciate the fact that the child liked me enough to be spontaneous. I would also appreciate the mother’s embarrassment of her son’s wild behavior. Pastors are big enough to take care of themselves.
If his spontaneous exuberance lacks discrimination, train him to properly channel it, but do not turn him into a girl. Invite other boys over and go out to watch them wrestle. I always rooted for the one on the bottom, whether it was my boy or another.

When other boys visited, our boys would yell and run out of the house to get something exciting going. I expected them to climb, jump, wrestle, push, fall, get hurt, and get up to try it all again. Children establish their own social rules. If one goes outside the limits of acceptable push-and-shove the others will respond with discipline.

Your son would have been better left alone. He admitted attacking the bigger fellow. A little thrashing from the big boys would teach him the limits. I would only intervene if I felt that the fight was going to cause serious damage to one of them.

Where do we draw the line in this matter of kids roughing each other? Teach your boys to be kind and loving toward their neighbor. A rule I often repeated was, “Fun is fun as long as everyone is having fun, if not then you are being a bully.” Understand, roughhousing by mutual consent is kind and loving as far as little boys are concerned. Attitude is the line. Never permit anger, jealously, hostility, wrath, or violence. I taught my boys that if someone becomes angry and wants to fight, you should walk off. Never stay to prove that you are not scared or to settle an argument with a fight. Hostile fighting was always wrong, even when the other guy started it. I taught them to be pacifists in their own defense unless their life or limb was in eminent danger, in which case they could use sufficient force to evade their enemy. Never allow pride to draw you into a confrontation or to keep you in one if it unexpectedly develops.

Boys can be rough and still have big hearts and be kind. If their energy is expended in work and good clean active tumbling they will not be as prone to sudden uncontrolled displays of hyperness.

Again I emphasize, focus on attitude. Come down hard and quick on selfish, mean spirits, but back off and give them room to explode--as long as they are grinning.

Mama, close your eyes. Go back in the house. It is likely to be too much for your sensitive nature. Those boys out there need to get it out of their systems before one of them grows up to become head of the War Department.

The Gift of Music

5 comments on “A Mother Asks”