Filter by:
NGJ Magazine / Articles / Adoption is a Redemption Story
Do you get our FREE Magazine? 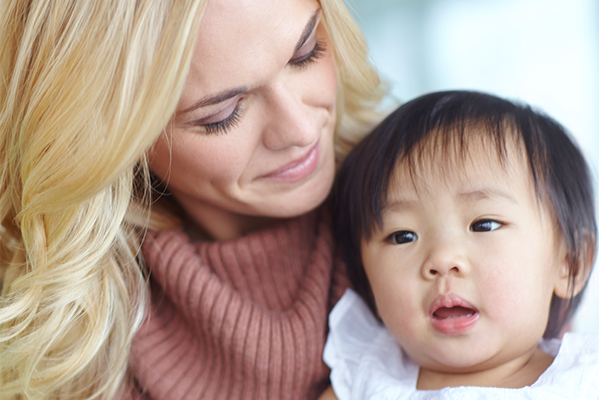 Adoption is a redemption story. It is a reflection of our own adoption into God’s family. When we can relate with our adopted children regarding our own adoption in Christ, we come to better understand what God desires for us as his adopted children. He wants us to feel safe and secure in his provision and care; he wants us to come boldly to his throne of grace; he wants us to know how much he loves us. It is his very goodness that leads us to repentance and a deeper relationship and walk with him. And it is this goodness that will also lead your adopted child toward healing, redemption, and a closer, healthier relationship with you as their parent.

I am the mother of three now-adult children, all adopted from Vietnam. Our oldest was five months old when my husband and I arrived home with him. Three years later, we adopted a seven-month-old and a five-month-old together. We were so excited to start a family! We believed that since we had adopted our children at such young ages, we could raise them normally without any adoptive issues. We spent the next several years learning just how mistaken we were.

Adoption issues are very real and need to be addressed practically. Unfortunately, there was little in the way of information and resources available to us at the time. People’s advice from their experiences with their birth children did not work with my children but left me feeling like a colossal parental failure. I spent many nights in tears beside my bed crying out to God in desperation. I learned to follow the Holy Spirit’s leading in parenting. Between that, the Pearls’ teachings, and a lot of grace, my children are the amazing young adults they are today.

These differences can become greater when dealing with international adoptions and cultural differences. They are also greater when dealing with older adopted children. One family I know raised beautiful children of their own. As their kids were grown and leaving the nest, they reached out and adopted a sibling group. The following years of parenting were nothing like their earlier experience with their own children. There were many more difficulties, and if one did not know they had already successfully raised a family, a passerby might assume something was very wrong with their parenting. The entire community learned a valuable lesson and is now able to be much more supportive of other adoptive families in the area.

Children are conceived as a life-book with blank pages. As early as their months in the womb, their mother begins to have influence over them and begins to write in their books. Debi Pearl explains more about this in her book, Create a Better Brain through Neuroplasticity. As a birth parent, you are in control from the beginning of what’s being written on your child’s heart, and you know your child’s history. With adoptive children, you often have no idea what transpired during the mothers’ pregnancy, how the birthing went, or what their first months or years were filled with. What you can know for certain are a few other things.

One hundred percent of the time, adopted children experience rejection, abandonment, failure, and trauma inherent with the loss of their birth mother. Then there is often additional trauma, abuse, or neglect of some kind. If the adoption is international, there is a whole new culture, language, and race to adapt to. Adopted children are wounded in many ways by the time they arrive in their new home. As babies, their wounds may not be as obvious, but as they get older, the unresolved trauma becomes more noticeable.

The personality of each child determines how they react to these early life changes and events, which affect them in no small ways. Your own responses to their reactions, as well as the environment you foster in your home, play a large role in their ability to process through these events toward a healthy outlook on life. And process they must. Things are not always as they seem with adoptive children. Sometimes things can seem smooth for a while, but until they process and heal from their losses, the wounds remain dormant until something triggers them.

Holding knowledge and understanding about adopted children’s needs will help encourage and instruct you during times of difficulty when you hit a rough patch. Understanding the common challenges that come with every adoption will help you be more prepared and can give you more compassion and wisdom along the way.

Though adopted children are in great need of love and healing, it is often the last thing they will readily accept. Instead, they often bite the hand trying to help them. They resist attempts to connect. They play on emotions and take advantage of what is given rather than allow the flow of love and acceptance being offered. They reject because they were rejected. They do not trust because they were abandoned. They expect you to fail them because others before you did so. They are familiar with trauma and seem to attract it. They believe they must protect themselves because no one protected them when they needed it most. They may follow in cycles of self-neglect or abuse, reliving their past. Or they can become abusers themselves, raining down their anger and pain onto others.

This can sound like a miserable endeavor without much hope. But it is just the opposite! There is much hope because we have a Redeemer, Healer, Great Physician, and Father who has a special place in his heart for these children. With him, there is hope. He turns the hearts of kings, and he heals the hearts of broken children.

What he needs are adoptive parents to love on his orphans unconditionally, to demonstrate the same kind of love that he shows us. We must first be filled with his love so that we can give fully and completely like he does. The adoptive parent is called to be a conduit of God’s love, pouring love like honey into a bucket filled with cracks and holes, reflecting Jesus until he can draw them to himself for their ultimate healing.

This can seem a daunting task that you’ve been entrusted with. However, if you have adopted, God has chosen you to be his hands, heart, and lips to speak truth over them and minister to them. This takes his strength, wisdom, and discernment to accomplish, but God is faithful to provide everything you need. God is using you to bring healing to them and change the trajectory of their lives. He saved these children out of the enemy’s snare for intended destruction, and you now stand in the gap for their lives.

Your fight is often a spiritual one. It is first won through prayer and listening to the Holy Spirit’s leading. This is your most powerful weapon, as your enemy is not flesh and blood. The devil fights to remain in control of your child’s life. You are his biggest threat, so he tries to use the child against you, your home, your marriage, and your family. But God is greater. He is faithful to provide you with the mercy, strength, and wisdom you need each day. Things may not always look like you think they should. Let Jesus lead and trust the outcome to him.

We are shepherding our children toward the Good Shepherd. And as our own Shepherd, He will guide us along the way. He offers direction and instruction for parenting under the guidance of the Spirit and in his Word. Parenting adopted children is not a happily-ever-after story but a mission field. Even after countless crises, collapses, and catastrophes, God can do above and beyond what you can possibly think or imagine. It is his nature to redeem, restore, renew, and repay where the enemy has stolen, and he will do just that. Be encouraged! He did it for me, and he’ll do it for you.

Each of my children experienced a lot of trauma and loss that affected both them and our whole family for years. God faithfully provided for needs that I didn’t even know existed until much later. Each of my children has a story to tell. I am now an “empty nester” as all three are off pursuing their dreams in work, college, and ministry. They are intelligent, productive adults and I could brag all day on them and the challenges and hurdles they have faced, dealt with, and overcome and are continuing to grow in. I am profoundly thankful to be their mother, and grateful to God for his faithfulness to us through the years. I can’t wait to continue watching how God uses them for his purposes and to his glory. This has been his story, and I have been privileged to be a part of it.

Watch for Wanda’s next article as she shares more about her journey with adoption and homeschooling. You can visit her facebook page @wandakinsinger for additional homeschooling and adoption support and encouragement.