Filter by:
NGJ Magazine / Articles / And A Little Child Shall Lead Them
Do you get our FREE Magazine?

And A Little Child Shall Lead Them 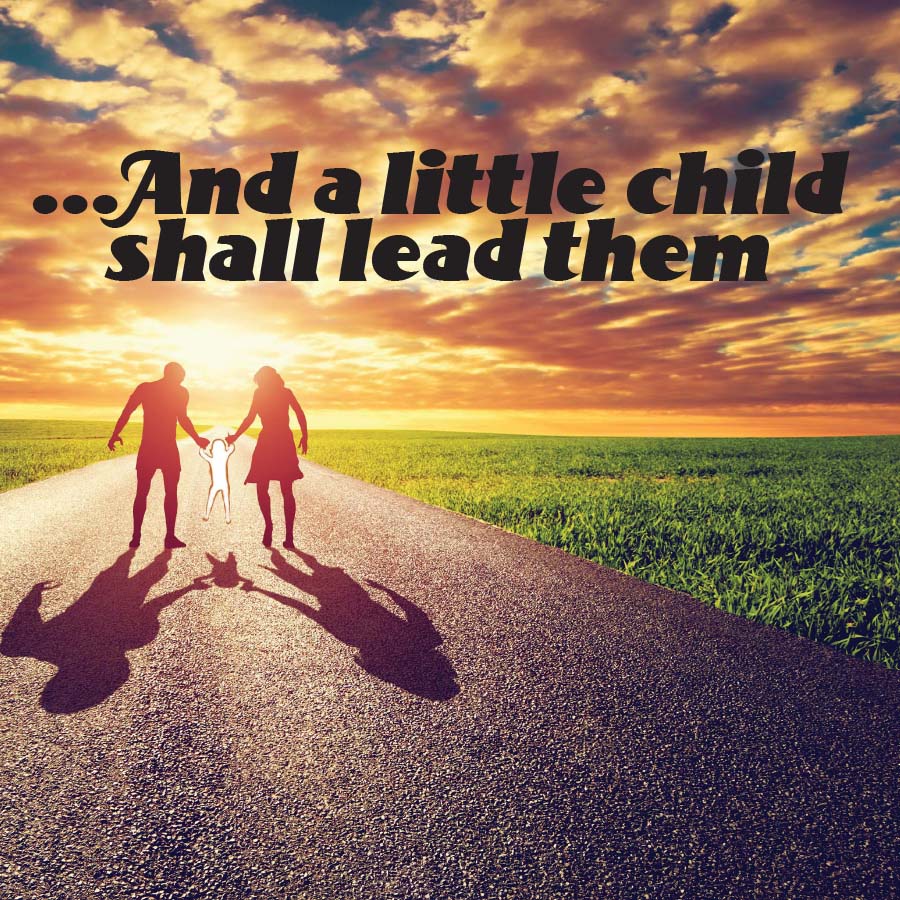 Over the many years we have been in ministry, I have taken note of the children who have passed away early. So many were spoken of as unusually kind, loving, forgiving, praying . . . just kids with a certain divine touch. MOST of the children that I knew who died young were indeed different. Maybe you are a parent who lost a child and can identify with what I am saying.

This has made me think there is more to life and death than we know. The Bible says, “For now we see through a glass, darkly; but then face to face: now I know in part; but then shall I know even as also I am known” (1 Corinthians 13:12).

God’s Word tells us what we need to know in order to know God, be forgiven, and walk in holiness. But God has been around for all eternity, long before us. There has been a magnificent history of creations and worlds of which we know only a little. There are a few things hinted at in Scripture that we can wonder about. One of those things is what happens in the future to the aborted babies and children who die early before having an opportunity to choose to love God. From God’s Word we know that he would not just turn them into little angels; a living soul will have the opportunity to decide their destiny.

When you think about it, God created the first living soul—an eternal being. Then he took a part of that living soul and made woman. All other living souls have emanated from that first couple, man and woman coming together to fashion another living, eternal soul. Eternal souls can’t cease to exist.

Zechariah 8:5 speaks of life in the Millennium: “And the streets of the city shall be full of boys and girls playing in the streets thereof.”

What children? Why so many? Where do they come from? Where are their families?

Knowing God, knowing other passages addressing the same subject, and knowing that eternal souls are, in fact, eternal, I think it is clear that these little people who died before coming to an age of accountability will be raised in natural bodies to grow up during the Millennium. Some of these children whose parents were saved may well be raised by their own parents. I will be delighted to see parents reunited with their little ones.

But what about the others, the children who were ripped from their mother’s womb? Who will raise these little ones? I think adoption will be at its peak during the Kingdom years. I believe parents will open their homes for a thousand years as children will grow up to 100 years of age, at which time they will be judged. “There shall be no more thence an infant of days, nor an old man that hath not filled his days: for the child shall die an hundred years old; but the sinner being an hundred years old shall be accursed” (Isaiah 65:20). We know that the millennial inhabitants will live the entire 1000 years in their glorified bodies. So who is the 100-year-old “child” and the sinner who at 100 is cursed? It appears that the child who reaches 100 will die and receive his glorified body or he will die and be cursed—damned—depending on his heart condition after 100 years on the earth. There will be a huge number of individuals who grow to maturity in the Millennium that will stand against God at the end of the age and be damned (Revelation 20:7–15).

So, how about those unusually loving children born to righteous parents who die in their youth—or in the womb? I believe these children will grow up during the Millennium with the aborted babies, BUT God needs leaders among the children. I think these exceptional children may be chosen to grow up with the other kids and be leaders to guide them to faith in Jesus. A child can reach a child better than an adult. I can’t help but speculate every time I hear an inconsolably grieved parent ask, “WHY?” Why did God allow this child who is part of a really godly family to suddenly drown, come down with cancer, die of heart disease, or be killed in an accident? Why?

I think I know why. I believe God is storing up an army of children to be helpers during the Millennium. I want to take the hands of the grieving parents and say, “Just a short while and you will be holding him in your arms and singing hymns, and you will watch as he leads the other children—the ones no one wanted, to come to know and love Jesus.

Now, we see through a glass darkly. We trust God has our best in mind. God is glorified by your heart of love and joy in trusting him. And soon, very soon, we will all find out if I am right. You know you think I am. For Jesus said, “Suffer little children, and forbid them not, to come unto me: for of such is the kingdom of heaven” (Matthew 19:14).

“Take heed that ye despise not one of these little ones; for I say unto you, That in heaven their angels do always behold the face of my Father which is in heaven” (Matthew 18:10).

You grieve for your loss, but our Heavenly Father never lets them out of his sight.

"The wolf also shall dwell with the lamb, and the leopard shall lie down with the kid; and the calf and the young lion and the fatling together; and a little child shall lead them." Isaiah 11:6