Filter by:
NGJ Magazine / Articles / Angry Children, Part 2
Do you get our FREE Magazine? 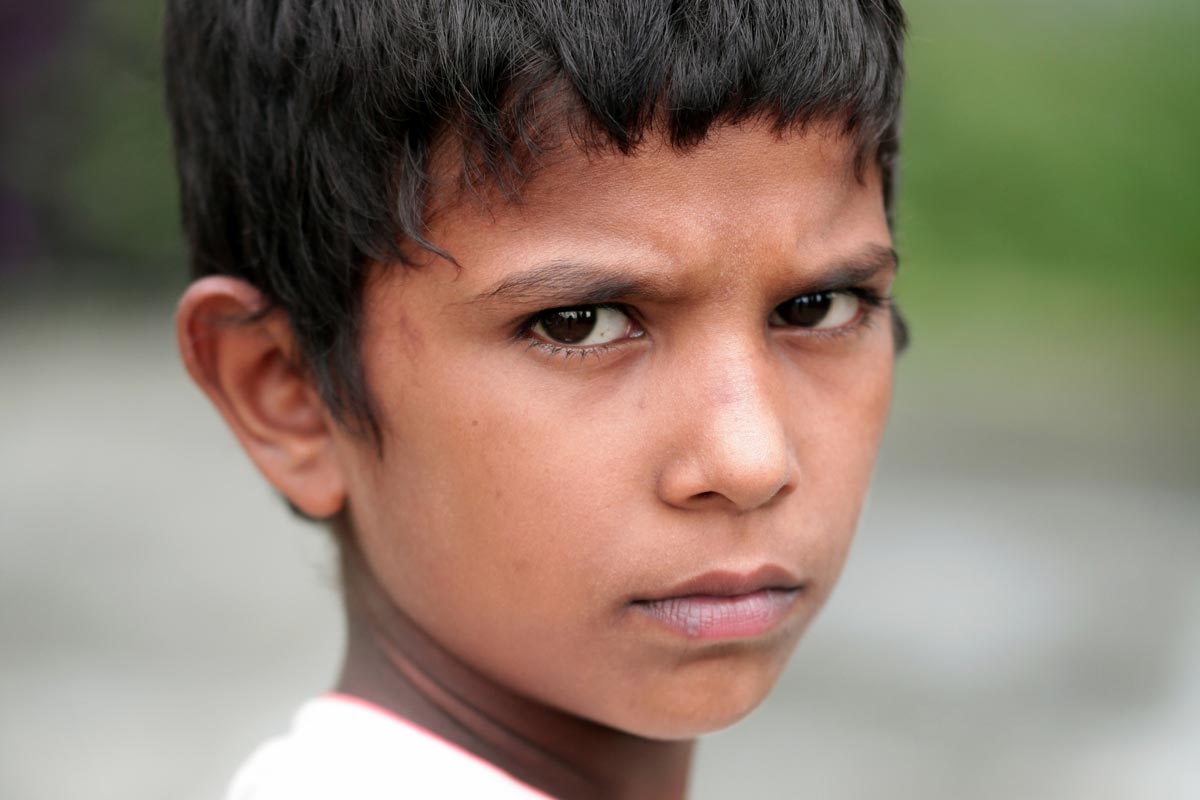 We previously discussed why children get angry and what we as parents can do to train them to be at peace with the world and all its inhabitants. We pointed out that frustration over one’s inability to manage the environment to one’s pleasure is the basic cause of anger. Another major source of anger is the “righteous indignation” one feels toward injustice and evil. Nothing is wrong with righteous indignation, as long as it is righteous. The problem is that we fallen creatures of Adam’s race are able to convince ourselves that anyone who thwarts our happiness or prevents our pleasure is evil, and that to rise up in defense of our rights is righteous.

If we are to combat anger in ourselves and our children we must first understand it. Anger is a natural human emotion. The word of God says, “Be ye angry, and sin not,” implying that not all anger is sin, but also implying that anger can be a dangerous harbinger of sin. In fact, we generally think of anger as sin because, in the vast majority of cases, it puts us on the slippery slope to sin.

We deceive ourselves by disguising our selfish motives as righteous crusades. When we encounter injustice or bullying it is proper to be angry. Anger motivates us to respond in defense of the weak and oppressed. It makes us advocates for truth and liberty, causing us to drop our routines and dedicate our resources to righting wrongs. Anger motivates us to be heroes, sacrificing our time, money, and even lives to come to the rescue of helpless victims.

The victim we most readily rescue is self, and afterward family and friends. My thoughts are, if you try to take away my God-given life, liberty, or pursuit of happiness you are evil and I am the righteous, offended victim. I put on my hero cape and stop the evil oppression. In most cases my righteous tools are sharp-pointed words, designed to expose the dastardly evil and put the villain in his place. I feel righteous and even glorious in my savior role. It is stimulating to point the finger and speak in a commanding and condemning voice. We are prosecuting attorneys and judges rooting out evil, setting the record straight, ending tyranny and evil aggression. Wow! It feels good to be on the side of truth, justice, and fair play.

We know it is wrong to try to take advantage of someone else, so we stand sentinel, making sure evil does not prevail. I hear our caped hero as he fights against injustice, “You made the biggest mistake of your life when you tried to put me down, thinking I was an easy target, somebody to be used and abused, but you will see that I am the defender of the oppressed and will not allow your evil to prevail. Go ahead, make my day!” The release of anger is a “righteous” cleansing, a celebration of our power and dedication to the good and just.

Nearly every angry outburst is rooted in righteous feelings. A man rails at his neighbor over his loud music, “It is wrong to invade my property with your offensive music; I will put an end to your selfish ways and force you to do the right thing.” Anger springs from the belief that somebody did me or another wrong.

A wife angrily nags her husband, “Why didn’t you call and tell me you were going to be late; I spent three hours preparing this meal and it went to waste. You are so inconsiderate.” She believes she is on the side of right and he is wrong—a child that needs to be rebuked, a thoughtless, evil man that cares for no one but himself. It is her duty to set things right, to rebuke and warn and threaten until he sees the error of his ways and stops hurting people. Anger is a generated drama where self is the star—the defender of justice, the conquering aggressor. If feels good to strike a blow for the good guys, to put down the enemy.

A three-year-old child is told to go to sleep, or that he cannot have a cookie, or that he can’t go out to play, and he throws an angry tantrum. If we could get into his mind we would discover that he thinks he is in the right and is being wrongly treated. Adults go out when they please and get in the cookie jar when they wish, and adults stay up late; so it is obviously a human right. He is being bullied and deprived of his divine right to free self-expression. It is just cause for a war. Throw off the tyrant and live free. It is the righteous duty of all free three-year-olds everywhere.

If you are going to effectively combat anger in your children you must see into their souls and address their grievances from their perspectives. Do not assume that they should just cheerfully obey without understanding why. When government is arbitrary and infringes upon our liberties, we adults get angry. But if the road detour is explained as a bridge that is out, we accept the temporary inconvenience.

The angry child sometimes experiences unpleasantness in his expressions of anger, but most of the time it produces various degrees of pleasure. It is that pleasurable stimulation that causes the chronically angry child to return to anger when there isn’t justifiable provocation. In anger one relishes the opportunity to get even with somebody. Further, in anger one convinces himself that he is right and that the other fellow is wrong. That gives a mental pleasure.

The pleasure of anger is the pleasure of a conqueror or of a crusader for truth and justice. It is soothing to assert oneself and display strength and courage in the face of the “wicked” adversary. Adults will go away and brag about how they “called a spade a spade,” how they “shot from the shoulder” and “told it like it is.” He gave a good account of himself and is quite satisfied with his performance, expecting others to admire his fortitude and courage.

You must understand that just as adults deceive themselves about their motives, so do children. If a child thinks he is just in his anger, no amount of spanking or corrective discipline is going to cause him to be less angry. To the contrary, an untaught child that is forcefully disciplined will become even more angry. The cure is training. “Train up a child in the way he should go…” Communicate a world view that causes the child to respect the rule of family law, knowing that it is for his good. Allow your children to manage some part of their lives so as to feel they have the power of self-determination. Every child must have important areas in which he is permitted to take care of himself, to act and bear the negative or positive consequences of his choices. If you so control your child’s life so as to thwart the urge to self-determination, he will feel he is being unjustly denied his fundamental God-given right to use his own judgment, his own vigilance, and his own capabilities.

Obviously children cannot be given free rein to self-expression, or they would turn out to be hedonistic hippies. They come into this world with a full measure of appetite and no self-control, no value system, no powers of self-denial. It is our responsibility to communicate and instill these traits in our children. When they are angry, we are communicating nothing but how to respond to an adversary. Furthermore, when children are provoked to anger over and over again they come to find pleasure in it and will make opportunities to express anger. They become addicted to it.

It seems hopeless, but it is not. It is not even difficult to train them to be thankful and cooperative participants in the family program. The key is fellowship. You must make your children like you, then respect you, and then care about how you feel. If this becomes a reality, and they see you as consistent, they will trust your judgment even when they do not understand your reasons because they will believe you have their best interest at heart. You will receive good will when you communicate good will. Tit for tat. Anger from a parent begets anger. Praise and compassion begets praise and compassion. Patience begets patience. Discipline begets discipline. You can’t get more out of a child than you put in, and you cannot put in what you do not have. Develop your own soul and you will develop the soul of your children.

The obvious question is, “In what areas should I allow my child self-determination?” Do not allow them self-determination in areas that have irreversible or permanently harmful consequences. They should not be allowed to decide what they want to watch on television, or who to communicate with on social networking. Smaller children should not be allowed to determine what they eat and when they eat, or where they go, or who their friends will be.

If they want a goldfish or a lizard, allow them to have full responsibility in the feeding and care, even if they starve the poor creature to death. It will be a lesson well learned. Allow them to foolishly spend their money. Instruct them in safety and do not allow them to do risky things like climb to the top of a tree, but do allow them to do things that can result in minor pain if they have bad judgment. I let my children ride their red wagons down a hill. They chose how high and how fast, which resulted in some wrecks and pain but no severe injuries.

Allow your children to paint a piece of furniture, to make a table, repair an object, tend their own garden, etc. Offer assistance as they ask for it, but do not rob them of the feeling of autonomy by intruding into the course of events with the intention of not allowing them to fail.

I cannot dictate all the areas that children should be allowed self-determination. It will vary from family to family and child to child, and with age and level of maturity. Understand the principle and you can adapt it to your family. You want to allow your children to experience the mechanisms of life and society with all of their rewards and negative consequences. They must feel the exhilaration of success and the ignominy of defeat. That is life, and it builds character.