Filter by:
NGJ Magazine / Articles / Barbie Dolls Revisited
Do you get our FREE Magazine? 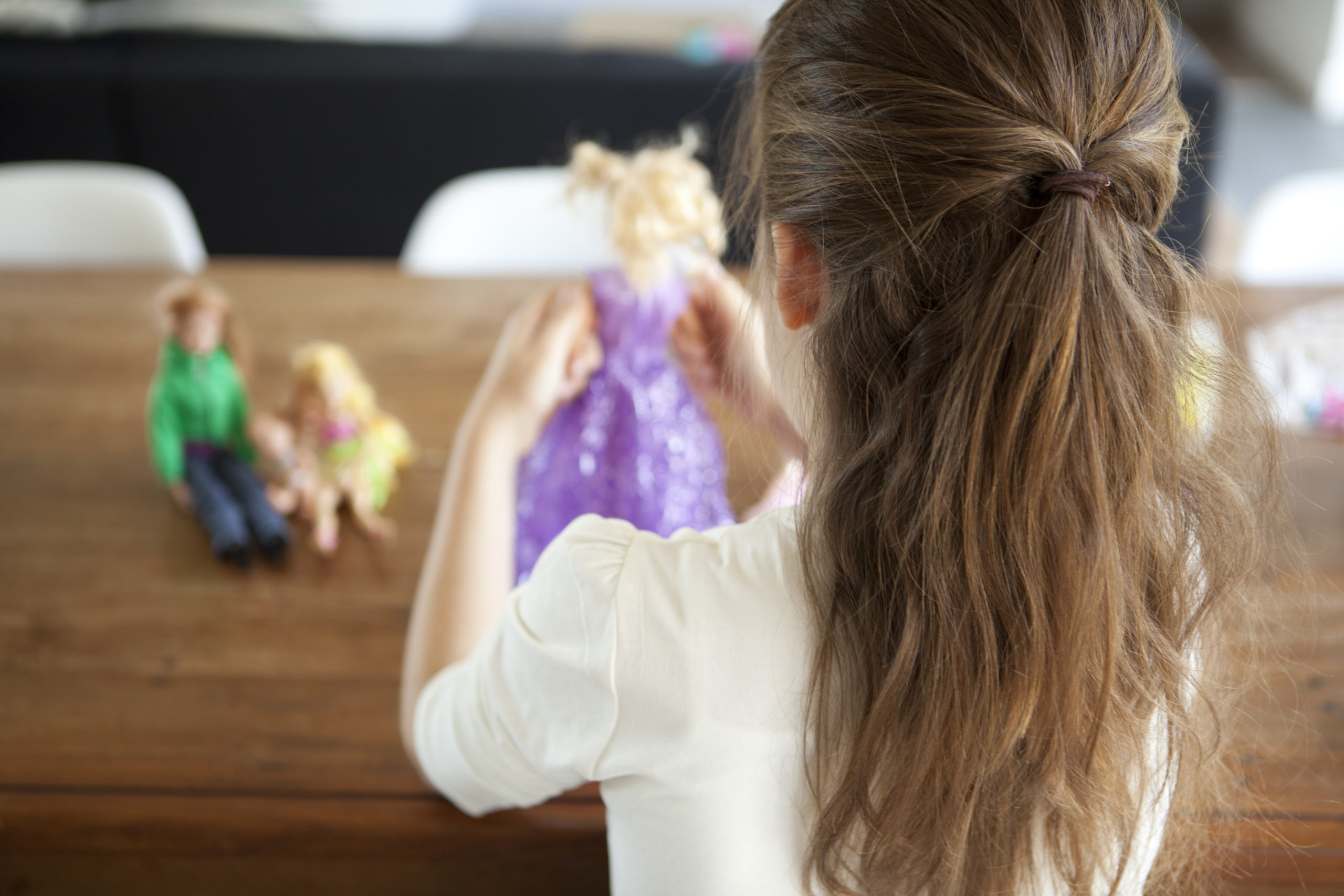 I wanted to ask you a few questions. About Barbie dolls, I have read your view and agree, but I never was bothered by the dolls until recently. I have 6- and 8- year-old girls who play with them constantly. I am ashamed to say that they must have dozens and they play with them daily. When it first began to bother me I
just tried to talk to them and I really didn’t even know what to say, I just knew that I felt odd about their playing with them. I spoke to my husband about it and he really wasn’t bothered by it, and so we just brushed it off. They have since received even more dolls at Christmas and birthday times. I have noticed in the past few days how terrible their pretend is. They speak of divorce, lying, the moms leaving their babies at the sitters while they work, and so  one. These are all things that they are never around (except family gatherings) and they know it is wrong. They were telling me about how this doll and that doll got a divorced and were laughing about it! They know that it is wrong to make a mockery of sin and I reminded them of it. My question is: How do I take the dolls away when they play with them and it is their absolute favorite toy? No one else sees how it is wrong, and everyone think that my feelings and convictions are a little too serious. It is also difficult because their daddy isn’t convicted or bothered like I am, so he doesn’t think getting rid of them is necessary. Any advice given would be great. I just don’t know how to handle this.

This mother had read the article published in our book, No Greater Joy Volume Two where we spoke of the fact that Barbie Dolls are very popular with some lascivious men. You can see the big-busted babes standing bare in the rooms of lustful, young, military men, and in the cells of prisoners. The street language for sexy girls is “dolls.”

After receiving a hundred testimonies like the one above, you cannot help but see the pattern. When a child pretends to be riding a horse, he is imagining HIMSELF doing so. When a child pretends to be driving a pickup truck, he is preparing HIMSELF for the day when his dream will become a thrilling reality. When a young man looks at pornography, his imagination is taking HIM to places HE will eventually go. When young girls play with baby dolls—imitations of infants—they are role playing motherly instincts and preparing themselves to assume that role later in life. Likewise, when young girls play with sexy babes, their imaginations are preparing them to assume that role later in life—say, at about thirteen.

If you think there is any similarity between a baby-doll and dressing up a Playboy model for an evening out with Ken, you are a blessing to the devil. At the least, Barbie dolls erode the innocence and natural modesty of young girls. In worse case scenarios, girls drawn to the sexy bodies of other girls are called lesbians? Even setting aside the potential for extremes, certainly Barbie dolls condition girls to focus on their bodies as their main asset and area of concern. They are learning to meet the world with their boobs rather than their brains.

To use modern, liberal rhetoric, Barbie dolls are sexists in the extreme. It creates a basis in fact for men to view females as objects to be exploited for their bodies. It is preparing the prey for the predator.

It disturbs me to see parents accept Madison Avenue promoters, Hollywood entertainers, psychologists, and John Dewey educators as if they were angels sent to help train, amuse, and educate their children. Nothing coming from these sources is neutral. Every thing has a world-view behind it. Every experience is teaching, molding, role playing one’s future responses. Parents need a big case of cynicism and skepticism when it comes to what the world offers. A good rule to follow is to assume that everything that is sold or promoted for your children is diabolical. “Prove all things and hold fast to that which is good…for all that is in the world, the lust of the flesh, the lust of the eyes, and the pride of life is not of the father but is of the world, and the world passeth away and the lust thereof….”

Mother, you said, “They have since received more dolls at Christmas and birthdays.” “They received”? Did Santa Clause send them or did you have anything to do with it? Reading between the lines, I sense that you are afraid of what your relatives and friends will think if you “go radical” on things like Barbie dolls.

When Deb read the above letter to me, my first response was, “Mother, your husband is taking his cue from you. Stop hiding behind him. He is not there every day listening to the girl’s conversation and seeing how it is effecting them. Get some backbone and do the right thing—get those sex goddesses out of the house before it is completely too late; don’t worry about what the girls might say. You are the parent. Take charge.”

After I had offered my response, our seventeen-year-old daughter Shoshanna walked in,
and Deb read the letter to get her response. I was humbled—well, almost. What wisdom! Shoshanna’s solution is brilliant, so I will restate it in my own words, just like it was my idea all along.

If you suddenly take the Barbies away, now that they have become such a vital part of the girl’s lives, they will not understand, and it might cause rebellion. Furthermore, they are already corrupted in their thinking. Even if they never play with a Barbie again, their world-views are already molded in that direction. They will continue to be surrounded with other stimuli that will promote the Barbie worldview. They would persist to dream and plan for the day when they can be a Barbie themselves. In short, it is too late to fix the problem by removing the dolls. What the dolls represent is now a part of their frame of reference.

So what is the answer. The girls got to where they are by role-playing. What would be better than disassociating yourself from a sinner? To convert the sinner to Christ and to a righteous world view. Therefore, win the Barbies to Christ. Bring them to repentance and disciple them into a holy walk.

Shoshanna said that if she were the mother of these girls, she would go to them with a smile and tell them that she wanted to play with them. Mother should ask for several of the dolls to be her own. She should then tell the girls that she is going to sew some doll clothes. Take the girls to the store and pick out material. Then go home and make modest clothes for two of the dolls. These two modestly dressed dolls will be Christian mothers. As Mother sits in the floor and leads her two “Christians" in conversation, they will speak of the joy and peace they have since they came to Christ. They will speak of how wonderful their marriages are and how they just love their husbands. Mother will take two other dolls and leave them in the traditional Barbie dress. These two “ladies” will continue to have the unregenerate world view that the children have adopted. They will speak of their divorce and of the unhappiness and misery that they are experiencing. One of them will get depressed and want to commit suicide because her life is so unhappy. You could get a regular soap opera going with the unregenerate dolls going from one marriage to another and then talking about how unhappy their children have become over the “divorce.”

While the mother is talking the unregenerate Barbies through their miserable lives, she is continuing to talk the “Christian” dolls through the joy of living.

Don’t cram this all into one day. Stretch it out so the girls get used to the idea of you playing with them. Mother’s unregenerate dolls can communicate with the girl’s unregenerate dolls. This is a time for Mother to express the wages of sin in a way that is not preachy.

When the girls are aware that there are two contrasting lifestyles and world-views on the playing field, it is time to introduce the “Christian” dolls to the unregenerate dolls. In the course of make-believe conversation, the unregenerate dolls ask the Christians why they are so happy and how they came to have such a wonderful home life. The Christians tell them about Jesus. Take a few days for the unregenerate to come to repentance and confess Christ as their savior and lord. Take them through repentance and faith. Cry with them, and then rejoice with them when they get saved. Once the unregenerate are saved, they too will want new clothes and new hair-styles.

Shoshanna suggested that at some point early in the game, the Mother tell the girls that they cannot play with the dolls unless mother is playing with them. Continue the game until the girls have accepted the new world-view and their dolls get converted also.

I think this is marvelous. It will not only undo the damage, it will be a time of teaching the girls the gospel and the essence of the Christian experience.

In time, Mother will want to wean the girls from the dolls and get them interesting in sewing dresses for themselves, or get them involved in teaching the gospel to real children. A six-year-old is capable of ministry to other children.