Filter by:
NGJ Magazine / Articles / Blooming Where We’re Planted
Do you get our FREE Magazine? 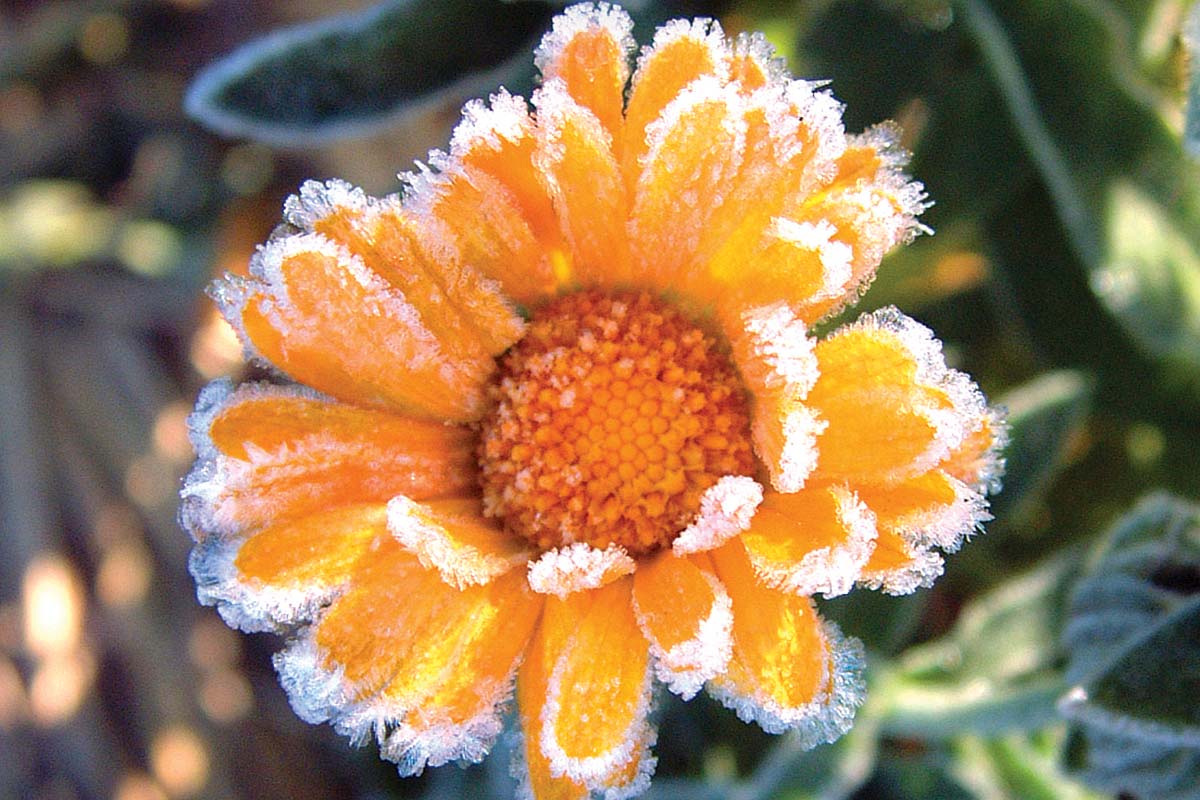 I found this calendula blossom one morning in November. It stood shining like a beacon in the middle of a very dead garden. All the other flowers had bloomed in the golden days of summer, tossing their smiles at us every lovely day from June to September. But I cannot remember the individual glow of a single summer-day flower. They bloomed when they were supposed to, faded when expected, and died under duress like every ordinary flower in my garden.

But this blossom! This blossom is immortalized in my memory, on my screensaver, in my photo album, on my website, and now I share its glory with tens of thousands of readers. Because it bloomed regardless of circumstances. Because it smiled at the frost like the others smiled at the sun. Because it died beautiful, its smile frozen in that last daring cheer for the God who made it.

True, the Calendula was just a flower. It had no soul on which to hang character for laud and acclaim. But if a soulless flower can give God glory by blooming regardless of circumstance, what might I do—what must I do—as a child of God?

“For this is thankworthy, if a man for conscience toward God endure grief, suffering wrongfully. For what glory is it, if, when ye be buffeted for your faults, ye shall take it patiently? but if, when ye do well, and suffer for it, ye take it patiently, this is acceptable with God. For even hereunto were ye called: because Christ also suffered for us, leaving us an example, that ye should follow his steps:” - I Peter 2:19-21

I have a few friends in bad marriage situations, and a few friends with unreasonable and abusive parents. They are fast wilting like the summer flowers. What can I tell them? What truth can comfort in the cold days of life? You are expected to bloom when the sun shines, and die when the snows come. But if you want to be immortalized, you will bloom for God, not the weather.

My life is good—I have had very few winter days to discourage my blooming. But I remember one time... 106 degree fever from malaria, in college in the state of Wisconsin. My roommate drove me to the emergency room in the middle of the night because I started babbling incoherently. I was 18 years old and had been on one mission trip to Papua New Guinea, and was now in Bible college with the hope of being a “real” missionary someday. The doctors on the red-eye shift were confused by my insistence that I had malaria. They kept telling me that it was “November in Wisconsin.” My roommate managed to convince them that I had been overseas three months earlier and that I had been having fevers every 12 hours for ten days. What else could it be? However, they had never seen malaria before and had no idea how to identify it or how to treat it.

I laid in the ER bed, hazing in and out of the situation, wondering if I was going to die before I’d even gotten the chance to be a missionary. I couldn’t believe my lame luck. Dying of malaria on the mission field would have been glorious enough, but dying of malaria in a Wisconsin hospital didn’t appeal to me. My eyeballs felt like they were on fire and I couldn’t see clearly. My roommate kept waving two fingers in front of my face and demanding that I tell her how many I saw, and what was my name, how old was I. She’d seen too many movies.

A young intern came in and out of the room occasionally. He took my blood pressure and temperature repeatedly and finally asked me what I had been doing in Papua New Guinea. I noticed him for the first time, and laughed because he looked like he had two heads. Then my vision cleared, and suddenly I thought, “If I die tonight, I’ll never get to be a missionary!” I started to cry and then realized that I had at least one ‘native’ to talk to during my final hour on earth.

“Do you know Jesus?” I asked the intern abruptly. My roommate giggled nervously and explained to him that I had a high fever (he had just taken my temperature). The intern slowly removed his stethoscope and looked at me with a startled expression.

“Do you?” He asked with excited wonder.

“Yes, I’m a Christian. I love Jesus. He died for me. Are you a Christian?” I noticed the room was blurry between us and I couldn’t tell if he or I was crying. He kept nodding and swallowing.

“You heard about Jesus and believed it, didn’t you?” I said. He was practically laughing aloud, he was so excited.

“Yes. Yes! It’s true isn’t it? I believed it. Something changed inside me. I feel like... I feel like... God has been talking to me... Is that weird? Does that happen to you? Is it going to stay like this? I hope so. I never knew life could be like this. I didn’t know God was so real. I’ve been so happy. I didn’t know what happened to me. I just believed it. I just believed it was true. I guess that means I became a Christian... I don’t know what to do next. What should I do next?”

My fever was so high I never could remember the conversation from that point on. My roommate told me later that we babbled on and on like two little kids about how great God is. I told the intern that he should buy a Bible and read it, and tell his friends and family about what happened to him.

It turned out that there was an old retired doctor who had worked overseas at some point in his life who came to the hospital that night (because the intern called him) and he was able to diagnose me with malaria, and prescribe the right meds. So I lived after all, and went to New Guinea to be a “real” missionary – and even lived through that experience as well. But I never bloomed as brightly as I did that night with 106-degree fever in the Wisconsin hospital. It never got that cold again.

As I sit here looking at the frosty blossom on my screen saver, I almost wish for another opportunity to give God glory when it hurts. I think of James 1:2, “Count it all joy when ye fall into divers temptations,” and I realize there really is a joy in suffering, pain, hardship, and even death.

I don’t envy those of you who find yourselves in winter days, but I don’t pity you either. There is an opportunity lying in that bitter snow around you.

Be a hero; bloom for God regardless of your circumstances.

4 comments on “Blooming Where We’re Planted”