Filter by:
NGJ Magazine / Articles / Corn Fest Fun!
Do you get our FREE Magazine? 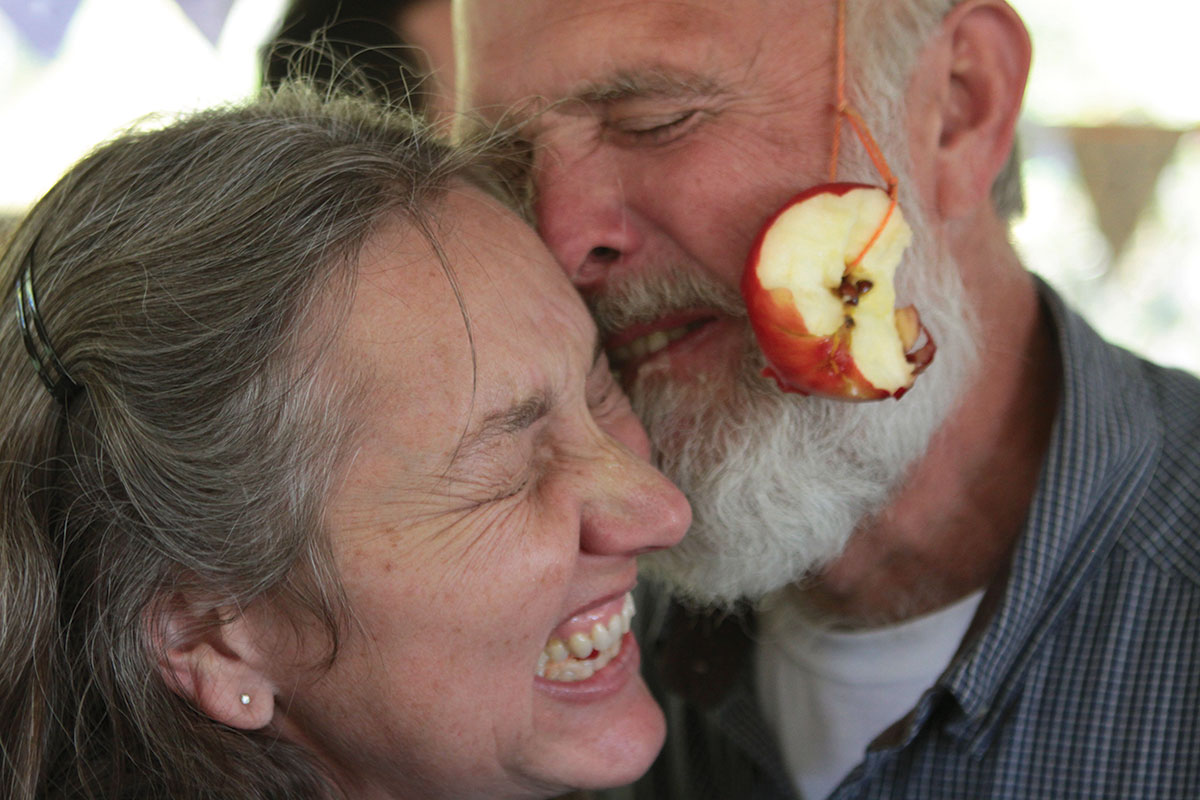 Wow! Did we have fun—family fun, the best kind. Our first Annual Cane Creek Corn Fest. Everyone loved it, especially the kids. I wish you could have been there and watched the kids watch their parents try to eat an apple hanging from a string. It was smacky face French style. Kids that suspected their parents might sometimes kiss or get intimate had their scariest suspicions confirmed when Mama and Daddy met under the swinging apple.

The right technique for eating the dangling fruit is to get the wife on one side and the husband on the other, coordinating their wide-open mouths to pin the apple in place and hold it while first one and then the other takes a bite, chews, and swallows. When the apple slips away, which it does repeatedly, their faces collide. They end up taking bites out of each other’s faces, slick with who knows what.

One couple with kids ranging from middle teens to toddlers kept failing to trap the apple, so after a minuet of face-bumping, he slung the apple out of the way, grabbed her in an aggressive embrace and went after her instead of the apple, planting a big one on her. Their kids looked horrified and amazed.

I have heard, but I don’t know for sure, that some of the parents whose marriages had become a little dull went home and hung apples from the ceiling in their bedrooms. Who knows, it could start a revival of marital passion.

In the spring I planted a big field of non-genetically modified corn, seeds I have saved from year to year. It is all organically raised and left to dry on the stalk. I early harvested enough to shuck, grind into cornmeal, and bag portions for all the church members. They were instructed to make as many corn dishes as they could think of. You wouldn’t believe the six tables filled with every imaginable corn dish. There were even delicious deserts, some of which had been cooked right on the spot—tortillas, tamales, tamalitos, corn dogs, and more. We placed numbers on all the dishes and had five people taste every dish and judge them for excellence, giving prizes to the winners in several categories. We even had a couple little kids on the judge’s panel. They chose the desserts, of course.

Am I in Heaven?

Lately, I have been highly impressed with the grace, love, and mercy I am seeing in the children and teenagers. There are about 90 of us who worship together on Sundays, and two-thirds are children. I watch in amazement as a thirteen-year-old boy cares for his one-year-old brother. You would think he was the father—or better, the mother. I watch as a six-year-old girl picks up her three-year-old sister and carries her over the rocks so she won’t hurt her bare feet.

I feel the grace of God flowing when a seven-year-old girl gets out of a swing to give it to a three-year-old and then helps him up, encouraging him to hold on and not fall.

The other day a ten-year-old boy came up while I was throwing knives. I spent about 20 minutes guiding him in practice. He did very well and I bragged on his accomplishments. When his mother and sister came over to watch, he threw about six knives and didn’t stick any of them. As they turned to walk away, he said, “Why is it that when the girls walk up you can’t do anything right?” I laughed and said, “It is because it is so important to us to look good in their eyes.” “Yeah, I guess that’s it,” he agreed.

About that time his seven- and five-year-old brothers walked up and showed great interest in what we were doing. What followed made me wonder if I weren’t in heaven or in the presence of an angel unaware. The ten-year-old called his brother over and showed him how to throw the knife. When he stuck two out of six, something the older brother had been doing before the girls showed up, big brother said with pleasure, “Look, John, you are doing better than me; you stuck two out of six; you are really good.” Then he got his five-year-old brother to throw, and, after a couple of tries, when he stuck a knife, the older brother again bragged on his little brother and told him that he was the best thrower of all. There was absolutely no jealousy in the ten-year-old. He took the greatest pleasure in the pleasure of his brothers. How often do you find such godliness in this world?

I now have nineteen grandkids and more being shipped as I write, and I see some of them every day. When I am around them I never fail to be impressed with the beauty of holiness I see in them. I know that when I was young that kind of grace was seldom seen in my family or in anybody I knew.

Now I know there must be times at home—when they have missed their naps, or when a sibling transgresses on the property of another—that they are less than godly. But I know there is something fundamentally holy growing in the families around me. I don’t suggest in the least that it is the fruit of my ministry or influence. There are families that have joined our church, coming from afar, and I see the grace of heaven on them as well. I do believe we homeschoolers and homechurchers are seeing the fruit of good seeds planted deeply and well- watered, now bearing fruit.

And it is not just the little ones. In our community and church there are young people of marriageable age and some who have only been married for less than a year. They love and honor their parents and walk in holiness. There is no rebellion, but great contentment and hope in the bright eyes I see smiling back at me. Again, it is not just our community; I travel and meet homeschooled young people everywhere who are growing up to be the only hope of future generations. I am highly encouraged.

The Gift of Wisdom