Filter by:
NGJ Magazine / Articles / Daddy's Little Man
Do you get our FREE Magazine? 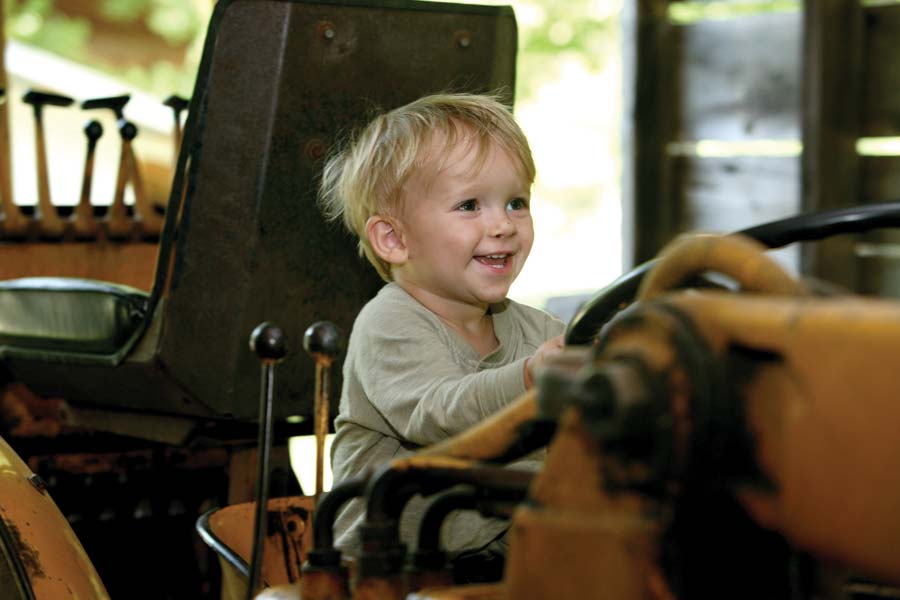 The other day, James decided to turn our old chicken coop into a creative playhouse where I can do my pottery. I am going to have a “sophisticated” arts and crafts center.

He installed three big, beautiful windows that we had picked up at a yard sale. Then he put on rustic metal and barn boards for the siding. Little Jeremiah James was as busy as a tumble bug keeping up with Daddy—learning to be a man. James would pick up the hammer, attack a board, put the hammer down, and in one swift movement, Jeremiah would replace the hammer with a level—the next tool Daddy would need. He was very serious about his part. I wish you could have seen the glow on his face, knowing he was helping Daddy. Jeremiah was trying to think about what his daddy would need next. Sometimes James would reach out for the hammer, and his grinning son would hand him the level.  Daddy would instruct him, “Jeremiah, bring the hammer back; I have to use the hammer to nail the siding on. I will use the level later.” Even though Jeremiah had several tools available, he knew which one his daddy was asking for.

Organizational Skills
It was interesting to watch  Jeremiah James rearranging his daddy’s box of neatly organized screws and nails. He put all the galvanized nails together, all the sheet rock screws together, and all the indoor nails in another spot. He did not notice size, so I showed him how to separate between type and size.  Once he understood this concept, he immediately started to re-organize them back to their original arrangement. Just having an opportunity to handle these screws and get familiar with them was a learning experience that would prove useful the very next day.

Building Confidence
Later that afternoon, James was busy with his chain saw, constructing a cedar pole trellis on the front porch of my Chicken Arts Center. As he cut the ends of the poles off, he would toss them a safe distance so Jeremiah could get to them. Jeremiah James decided that the cut ends belonged in the fire pit, which was some distance away, accessed by climbing up a steep eight-foot rise. It was fascinating that, without being told, he had elected to do a job that he felt needed to be done. Of course, we cheered him on. “You are so strong; good job, little man! Get another one.” He continued working until James finished his project that evening. I have two men!

Self-Worth because he was Worth Something
The next day, when James was gone to work, I decided to work on our craft building. After getting a piece of metal siding up and in place, I realized I did not have my hammer and nails. Here I was, spread out, trying to hold up the metal and reach for the hammer at the same time. I really didn’t think my small son would understand what I wanted, but I decided to give him a try, “Jeremiah James, can you get me a hammer and a nail?” Sure enough, here he came climbing through the small opening with the hammer and the nails. And not just any nails; he had the galvanized roofing nails.  In a whole tray of various nails and screws, he remembered which ones I had used on the metal the day before. I am sure that his experience of separating the nails and screws played a part in his being able to accomplish such a feat.

Every minute counts
Jeremiah is like a sponge soaking up every drop of what is going on around him. We have learned that whether you teach children something worth learning or not, they will be learning. It is a real shame when it is worthless nonsense that fills their little brains, or worse yet, something really negative. I see children who are two and three years old who seem to not understand when they are commanded to do something. They have learned to tune you out, unless it is a question concerning food, friends, going to town, or having a party. They have never learned to concentrate on a working command or project. It is foreign to them.

Training children is much more than, “Don’t touch”. Training is everything you do. They are watching and emulating, listening and experimenting, and constantly trying to figure out what you are doing so they can do it too. Little girls are learning how to be wives. Little boys are learning how to be men. They remember what you did yesterday, and they will try doing it tomorrow. Scary, isn’t it? It scares me into training my son to be the best of men.

What I Want in a Guy!