Filter by:
NGJ Magazine / Articles / December 2020 Calendar
Do you get our FREE Magazine? 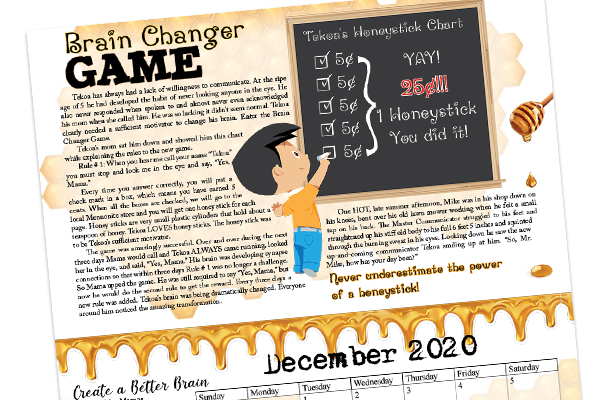 Landon has always had a lack of willingness to communicate. At the ripe age of 5 he had developed the habit of seldom looking anyone in the eye. He also never responded when spoken to and almost never even acknowledged his mom when she called him. He was so lacking it didn’t seem normal. Landon clearly needed a sufficient motivator to change his brain. Enter the Brain Changer Game.
Landon's mom sat him down and showed him this chart while explaining the rules to the new game.
Rule # 1: When you hear me call your name “Landon” you must stop and look me in the eye and say, “Yes, Mama.”
Every time you answer correctly, you will put a check mark in a box, which means you have earned 5 cents. When all the boxes are checked, we will go to the local Mennonite store and you will get one honey stick for each page. Honey sticks are very small plastic cylinders that hold about a teaspoon of honey. Landon LOVES honey sticks. The honey stick was to be Landon's sufficient motivator.
The game was amazingly successful. Over and over during the next three days Mama would call and Landon ALWAYS came running, looked her in the eye, and said, “Yes, Mama.” His brain was developing synapse connections so that within three days Rule # 1 was no longer a challenge. So Mama upped the game. He was still required to say “Yes, Mama,” but now he would do the second rule to get the reward. Every three days a new rule was added. Landon's brain was being dramatically changed. Everyone around him noticed the amazing transformation.

One HOT, late summer afternoon, our neighbor Mike was in his shop down on his knees, bent over his old lawn mower working when he felt a small tap on his back. The Master Communicator struggled to his feet and straightened up his stiff old body to his full 6 feet 5 inches and squinted through the burning sweat in his eyes. Looking down he saw the new up-and-coming communicator Landon smiling up at him. “So, Mr. Mike, how has your day been?”

Never underestimate the power of a honey stick!