Filter by:
NGJ Magazine / Articles / Developing Confidence and Competence in a Three-Year-Old
Do you get our FREE Magazine?

Developing Confidence and Competence in a Three-Year-Old 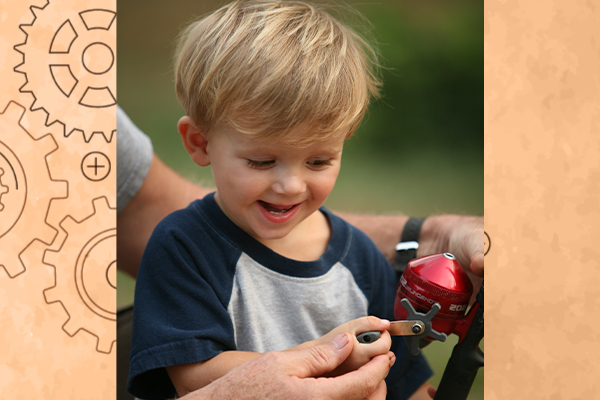 Lincoln, one of my 26 grand-kids, just turned three. He is my little working buddy right now. During the summer he was my fishing buddy—too much so; I found myself having to constantly say, “Maybe later.” He would fish 24/7 if he could and will become best pals with anyone who will enable his addiction.

When he was in his second year, I made the mistake of handing him the rod after I had hooked a one-pound small-mouth bass. He dragged the fish up on the gravel bar and claimed it for his own. Since then he has caught hundreds of fish. Fishing is now a part of his DNA. And he loves eating what he catches.

Seeing his fondness for fish, his parents bought a fish bowl with a cute little goldfish. When they presented it to him he exclaimed, “Can we eat it?” When they answered, “No, it is a pet,” he said, “Bait,” and headed for his rod and reel. They now use the bowl to keep the lizards and bugs he catches—for bait, of course.

Just yesterday, Lincoln was hanging out with me as I was running about the farm doing chores and small projects. He constantly asks questions about everything. “What is that? What does it do? How does it work?” and the ever-uttered query, “Why?” It occurred to me that he is like an alien who just arrived on this planet who wants to identify, name, and understand everything. He is engaged in hyper-learning, trying to catch up with the native population. He wants to try everything, do everything, comprehend everything.

I am well aware that Lincoln is ahead of many of his peers in regard to curiosity and confidence. So I pondered what makes him so mature, attempting to formulate a principle I could pass on. How can we help our children develop competence and confidence—essential traits to success and happiness?

The modern pop psychology approach to instilling confidence is by means of positive affirmation. “You are beautiful. You are smart. You are loved. You can be anybody and do anything you want.” But I have observed that the more praise and positive words you give, the more self-criticism and eventually self-loathing the child experiences. Knowing themselves to be much less than the praise, they come to see the praise as a standard they fail to achieve.

I will confess, there are some three-year-old kids I just don’t like. However, I know that if I had the opportunity to be their full-time—and I mean FULL-TIME—caretaker for a week or two, I would come to like them very much, and in the process I would become their favorite person. I like people who are likeable for their positive traits, and the same applies to children.

Some of you have children you don’t like, and you feel guilty about it. Want to change that? Sure you do. Then pay attention. Stop blaming yourself for not liking the unlikeable—a totally futile course of action, an impossibility. Instead of trying to make yourself and your children feel good about unlikeable behavior and attitude, make your children likeable. Likeability comes naturally when they have acted in a manner that elicits respect and praise.

Everybody respects and likes people of any age who are competent and confident. Competent people don’t whine, beg, get their feelings hurt, blame others, get bored, or laze around waiting on someone to serve them while they are unthankful. And competent people never become self-loathing. They don’t need your positive affirmation. They know what they can do and find self-worth in it. The competent, confident child or adult is free in spirit to express benevolence and patience with others. So how do you as a parent promote competence in your children?

It is in the many little things you do and say all day long. Number one: talk with your children from birth. By the time they reach one year, you should be explaining everything going on. Yesterday, Lincoln asked me why water left in a bucket over time disappeared. I explained evaporation and condensation, clouds and rain, gasses and liquids in relationship to temperature and humidity in the air. Did he understand all of it? Of course not, but he listened intently and was satisfied that there is a physical law at work that explains the mystery. And most of all, he felt respected. Some little bit of the science took hold in his mind and he will consider it when he sees water evaporate from his lizard habitat. He will know that it has gone into the air. With other questions on the same subject, there will come a time when he will understand the science before most kids even ask the question. This translates into a bigger, more interesting world for Lincoln, a world outside his feelings and indulgences.

Number two: let him help you and help himself. When we made a stop at the house, he went into the pantry, utilized a stepladder, and acquired a little sack of all-fruit gummy bears. Later I noticed that he was struggling to fish out the last bite from the small hole in the package. I started to make myself dear to him by taking it out of his hand and opening it further. But I checked my impulse, knowing he needed to struggle and conquer on his own. After about three minutes he beat the sack and was the champion, no doubt feeling good about himself. Such a little thing—one of a hundred every day—but through it he added to his competence and confidence and therefore his self-esteem, resulting in happiness.

I have watched his daddy, James, stretch out a project by allowing Lincoln to hold the wrench on the other side of the bolt as James unscrewed it. The kid smiles and later tells his mother about his accomplishment. She listens as if it were the most interesting story and compliments his prowess. A competent kid is a happy kid who is part of the program and doesn’t want to express any attitude that would spoil the fellowship and goodwill all around.

Number three: remain thoughtful of children’s development. Teach them before you think they are ready to understand. When it becomes obvious that they have matured to the level of understanding, it is too late for optimum learning and psychological growth, for something of lesser import has filled that part of their brain that would have learned. You have missed the window of best learning. That is a fact of brain development. See my wife’s book on neuroplasticity for more on this topic.