Filter by:
NGJ Magazine / Articles / Don't do Missions as Usual
Do you get our FREE Magazine? 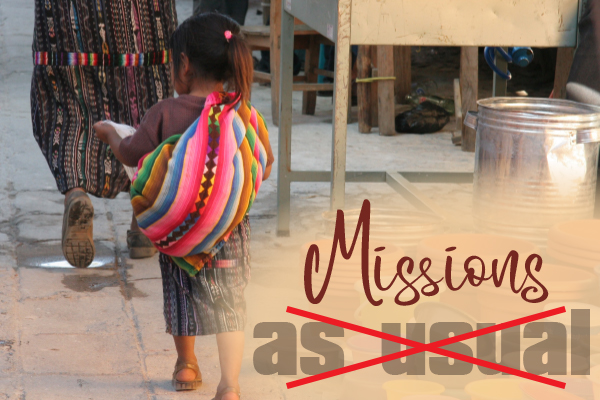 From a missionary:
Dear Michael and Debi Pearl,
On my resent mission trip to Sudan I came across a dear pastor that has found the perfect building for his church, but he simply can’t get the $69,000 dollars to purchase it. He is such a godly man and has a heart to minister to his people, and this would be a great blessing to them if we could raise the money for this worthy missionary project. I was hoping No Greater Joy would consider casting your bread upon the water to help the Saints in Sudan? I know you love missions.
Thank you,
Fellow Servant, Johana

Dear Johana,
The old missionary Milton Martin told us over and over, “Don’t do missions as usual. If you do, you will handicap the people that you win, make them dependent, and you will reach few.” When Martin went to Southern Mexico over 60 years ago he wanted to win one remote tribe of Indians. God spoke to him concerning the other 434 unreached tribes in the mountains and said GO. From that moment on he changed how he did missions. He kept looking for ways to get the gospel to the UNREACHED masses. He looked for the easiest, cheapest, and fastest ways. When he died this past year, he had reached hundreds of tribes, and those tribes had gone out and reached many more tribes. Just two years ago hundreds of men of God (from every one of those tribes), who had become well founded in the Word, came to honor him and say thank you. Martin had to watch on his phone as he was too old and weak to attend, but he will see them in glory.

Martin conducted his missions with the written page mostly, at first dropping tracts from airplanes, riding mules in with films to show, and leaving tracts and Bibles behind. He even dropped his younger son off at different tribes to show the gospel films. One day he returned to find his young son gone. The leaders had taken him deeper into the mountains to show the film to some who had never heard. It was a number of days before they returned.
Martin did not assist the indigenous peoples in building church buildings. He didn’t pay the salaries of young pastors. When one of the men from our church joined Milton in his next to last trip, traveling by mule and walking, they spent several days ministering to the churches, and when they got ready to leave, the people took up and offering. Our man was embarrassed to take the few dollars they gave him, but Milton told him it was important for their spiritual growth to take the offering.

When we attended a mission conference Martin conducted our eyes were opened. We stopped supporting people who went on mission trips UNLESS they were going with a purpose that was not missions as usual. Milton Martin learned to do missions unusual. That can’t be done focusing on one little congregation like they do in the Western church. One man reached tens of thousands in his life time with hundreds of indigenous churches growing out of the ministry—some of which he never attended. I remember hearing Martin sing, “Untold millions are still untold. Untold millions are outside the fold? Who will tell them of Jesus' love and the heavenly mansions awaiting above?”

I am telling you all this to say, we could give $69,000 to the people in Sudan who already have a preacher giving them the gospel. Or they could meet under a tree, or break up and meet in houses, or slowly raise the money for their building. We have done all those things throughout our lives and never been hampered by the lack of a building.
With $69,000 we can reach 3,500,000 unreached people with the book of God’s Story over the internet. This book can be shared over and over again for many years, so the real number reached with the gospel would be ten times 3.5 million. We hear from folks all over the world that have come to know Jesus through this download. That is what God has given us to do. If we, as you say, were to cast our bread upon the waters to purchase a building for one congregation, we would be casting it upon a pond of well-fed fish. As it is when we cast our bread upon the waters it is the flowing stream of the web that winds through every country in the world, reaching the most remote regions of places like Afghanistan, India, and Iran.

We too sing, “Untold millions are still untold. Who will tell them?” We know that is our job.

Cast thy bread upon the waters: for thou shalt find it after many days.
Ecclesiastes 11:1

2 comments on “Don't do Missions as Usual”