Filter by:
NGJ Magazine / Articles / Excerpt From By Divine Design
Do you get our FREE Magazine?

Excerpt From By Divine Design 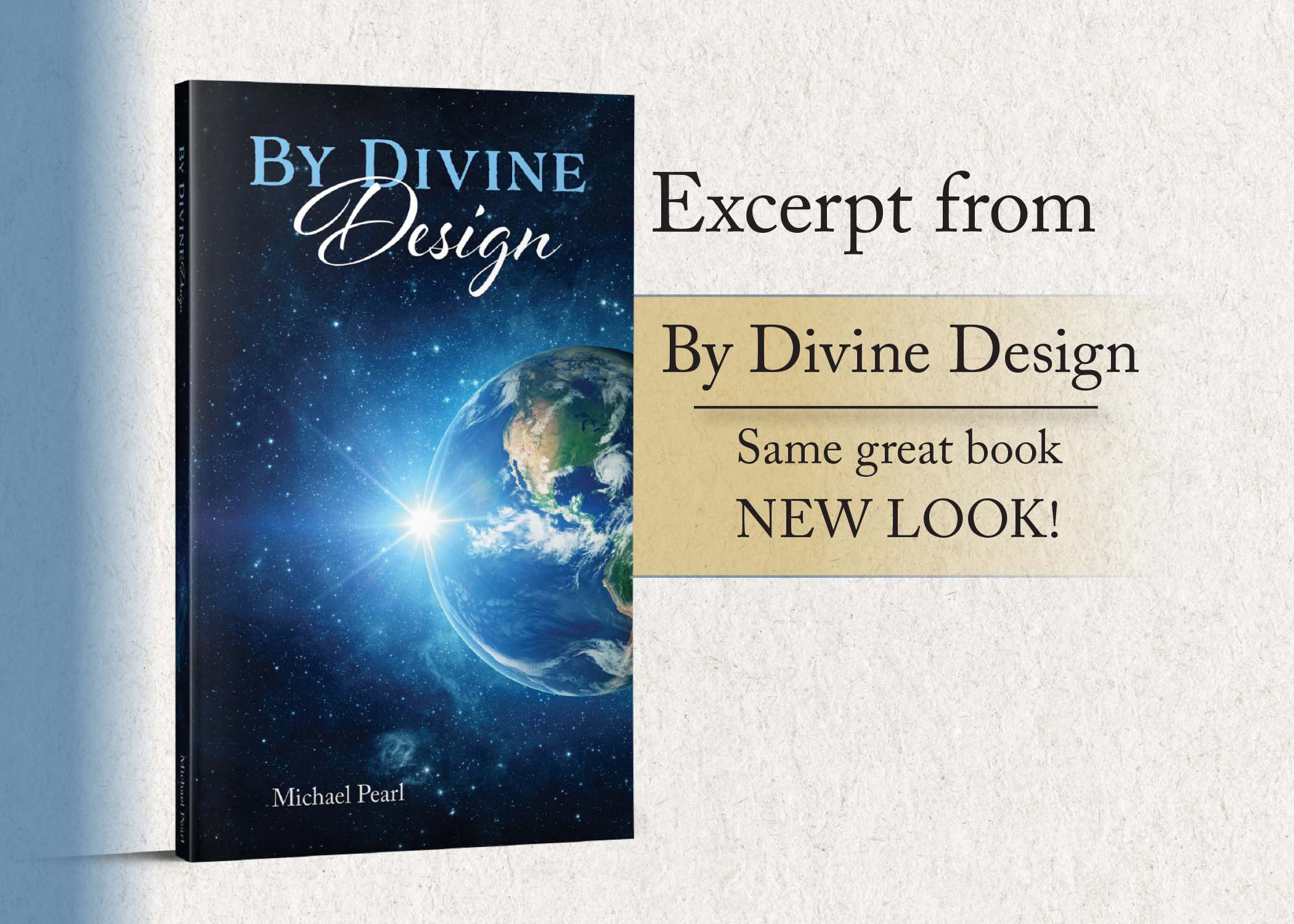 Unrestrained human will, sovereignly permitted, appears to have grown into a malignancy, for we fight and kill to be free only to succumb to a bondage within. Our inner captivity seems to be so thorough as to be the first principle of existence. Yet we resist our degradation like a man resists drowning, for when we fail to be good we pretend to be.

When we find ourselves unfulfilled, even miserable, we look to religion or philosophy. Diversity of philosophy testifies to our agreement that there is a problem. Diversity of religion testifies to our lack of agreement on the solution. Philosophy sits on the steps explaining the process, watching the captives march off to their cruel destiny, while religion, far from being a solution, is often leading the captives. In the end the philosopher cowers alone, harmlessly babbling his imaginations, while the priest takes the sword to make converts. So the Holy Grail is often stirred with a bloody dagger.

Historians stand over the graves of great men to record their achievements. Regardless of our pomp and glory, disease and death is the door through which we all must exit. The feeble moth and decay eventually erase all evidence of our passing.

Are we actors in a Shakespearean tragedy? Is earth a stage on which we perform a pre-written drama? It is as if we began our existence somewhere in the middle of a play and will disappear beyond the curtain long before the last act. Without a script the performance has no meaning beyond immediate personal indulgence.

Sometimes in the midst of the pain and injustice, when it becomes obvious there is no fairness, some are prone to doubt that this “drama” has any plot. Theories of self-creation and chance have replaced belief in an intelligent Creator. Belief in an unplanned existence without destination begets meaninglessness, which begets futility, and futility begets loneliness. It has been observed, unless earth’s inhabitants are indulging they are all lonely.

Many doubt God’s good intentions, angry at the Deity whom they feel is responsible for their sufferings. While denying or at least ignoring His existence they continue to blame Him for not being more in control. Their concern is not so much with overall meaning as with their own fulfillment.

“Why did He do this to ME? If this God knows what will happen in the future, He would have known the results of His botched creation.” A baby dies...  “Why did God let this happen?” An accident, and someone is left crippled or scarred... “Doesn’t God care?” War, famine, AIDS... “If I were God, I would ...,” and so it goes. Very few of earth’s inhabitants ever really trust their Creator.

Inmates in the state prisons, students on college campuses, and our neighbors next door all ask the same accusing questions. Likewise, Christian parents standing beside a small grave are often heard challenging God. If we fault others for questioning God, we should be reminded that our heart often asks questions our lips are too cautious to speak.

Theologians often dismiss these questions by answering, “God didn’t create sin, Satan did,” or saying, “God doesn’t send men to Hell, they send themselves by their sin.” Why do these answers not satisfy our deepest sense of the rational?

On many of these difficult questions God has chosen to remain mostly silent. When challenged, “Why have you made me thus?” His response has been, “Shall the thing formed say to him that formed it, Why hast thou made me thus? Hath not the potter power over the clay?” Apparently God does not think that a clinical analysis of His motives or an apologetic defense of His actions is necessary to vindicate His moral government; for God “giveth not account of any of his matters.” Just as wise and noble men do not stoop to defend themselves before cynics and petty critics but remain “presidential,” so also in the face of human criticism, God has remained Godly.             God has chosen to be silent and remain above the fray, so I may be presumptuous as I come to His unsolicited defense. Nonetheless, I will take up the answer that Elihu directed to Job: “Suffer me a little, and I will shew thee that I have yet to speak on God’s behalf.  I will fetch my knowledge from afar, and will ascribe righteousness to my Maker (Job 36:2-3).”

Parable of the king’s son

In a faraway land and in another time, a benevolent king ruled his kingdom wisely, and all the people loved him. Well, not all. There was a small group of rebels who worked in secret, seeking to overthrow his rule. They wanted the freedom to engage in immoral revelry, which was not permitted under this righteous king. The usual punishment for treason was death, but the king passed a law saying that anyone guilty of treason would be allowed to live but would have his eyes put out. On several occasions young men were brought before the king to be tried for treason. After carefully hearing the evidence the king had regretfully pronounced the penalty of blindness upon some of these young men.

One day the king’s sheriff brought a young man before the court to be tried for treason. It was rumored that he was the ringleader of the rebellion. The king was disturbed by the hood covering the upper body of the prisoner. But the court lawyers requested that the concealment remain in place to assure that justice would be accomplished. The king went along with the request, assuming that the accused must be an acquaintance or perhaps the son of some state official. He had heard the evidence that proved to be overwhelmingly incriminating. When it came time to pass sentence the lawyers removed the hood to reveal the king’s own son. The king was about to pass the sentence of blindness on his only son. With great restraint of his emotions he announced that he would wait twenty-four hours to pronounce the judgment. Though it could not make a difference in the court’s decision, the king used that time, to no avail, trying to bring his son to repentance. The son felt sure that the father could not forgive him, and the penalty of the law was unavoidable.

During the intervening time, word of the developing situation spread over all the kingdom. There was much speculation about what the king would do. Half of the people characterized the king as a man who placed duty and the letter of the law above his own feelings. They supposed the king would not only take out his son’s eyes but also have him executed as an example. The other half of the kingdom believed the king would yield to deep feelings toward his son and free him unharmed. Many believed that he would elicit from the son a promise of allegiance and then set aside the penalty of the law.

The king found himself in a dilemma, with two conflicting compulsions. He desired to save his son, and he desired to remain a just and lawful king. Having blinded others for the same offense, could he make an exception with his son and still maintain the public perception of just? How could the public continue to respect his rule? Furthermore, if he should withhold the punishment, how could he command respect or control of his son? The offense would forever stand between the king and his son. If not punished, would the rebellious son not be even bolder in his rebellion?

On the other hand, how could he pass sentence on his own son? Could a father who begat a son of his own body, and invested so much in rearing him, suddenly shut off all feelings? Could he just blind his son and forget? Would life have any further meaning for a father?

Twenty-four hours later the court was reconvened. The royal city was packed with expectant, solemn onlookers. The prisoner was brought into the court. His face not being covered, his bitterness was clear for all to see. Looking at his countenance, one would think he was holding his father responsible for his rebellion.

The king was the last to enter the chamber. With expectancy running high, he was led into the chamber wearing the hood his son wore the day before. Feebly, he was steered to his place on the throne. He immediately commenced to recount the incriminating evidence. Then while the crowd stood in hushed wonder, just when he was preparing to pass sentence he reached up and slipped the hood from his head. The audience fell back in revulsion as they saw the two gaping, bloody holes where royal eyes had once been. The crowd gasped as the king addressed the general public. A servant placed before the people a tray containing the king’s eyes. The king asked the general public if common justice could be served by the substitution of his eyes for his son’s. The people unanimously agreed that justice was served. The king had found a way to be faithful to his law, thereby maintaining its integrity, and a way to satisfy his love to his son.

One problem remained, the son’s rebellion. If the father had been able to elicit prior repentance from the son, the sacrifice would have seemed justifiable. But the offering was made when the son was still a self-proclaimed enemy of the king. That too was resolved in the king’s bloody sacrifice. Seeing the father’s love and forgiveness, the son was moved to repent toward his father. All doubt as to the father’s love and wisdom involuntarily vanished. The son fell at his father’s feet and begged for the forgiveness that he had already received. He was placed at the father’s right hand where he forever thereafter faithfully and benevolently assisted in all affairs of the kingdom.

The dilemma was solved. Sacrificing neither his love to his son nor justice, the law had been honored in a way that elevated it as never before. The king had not only expressed his love to his son, but had brought him to humble repentance. The integrity of the kingdom was maintained and the son was saved—all at the father’s expense. “That he might be just and the justifier… For God so loved the world that he gave….”

All you have to do is ask but asking isn’t a whim or today’s wish it’s like, you have to be deadly serious about it. Ask, seek and ye shall find. Knock and it shall be opened unto you.