Filter by:
NGJ Magazine / Articles / Exciting News - A Shindig Love Story
Do you get our FREE Magazine?

By No Greater Joy Ministries
December 9, 2014 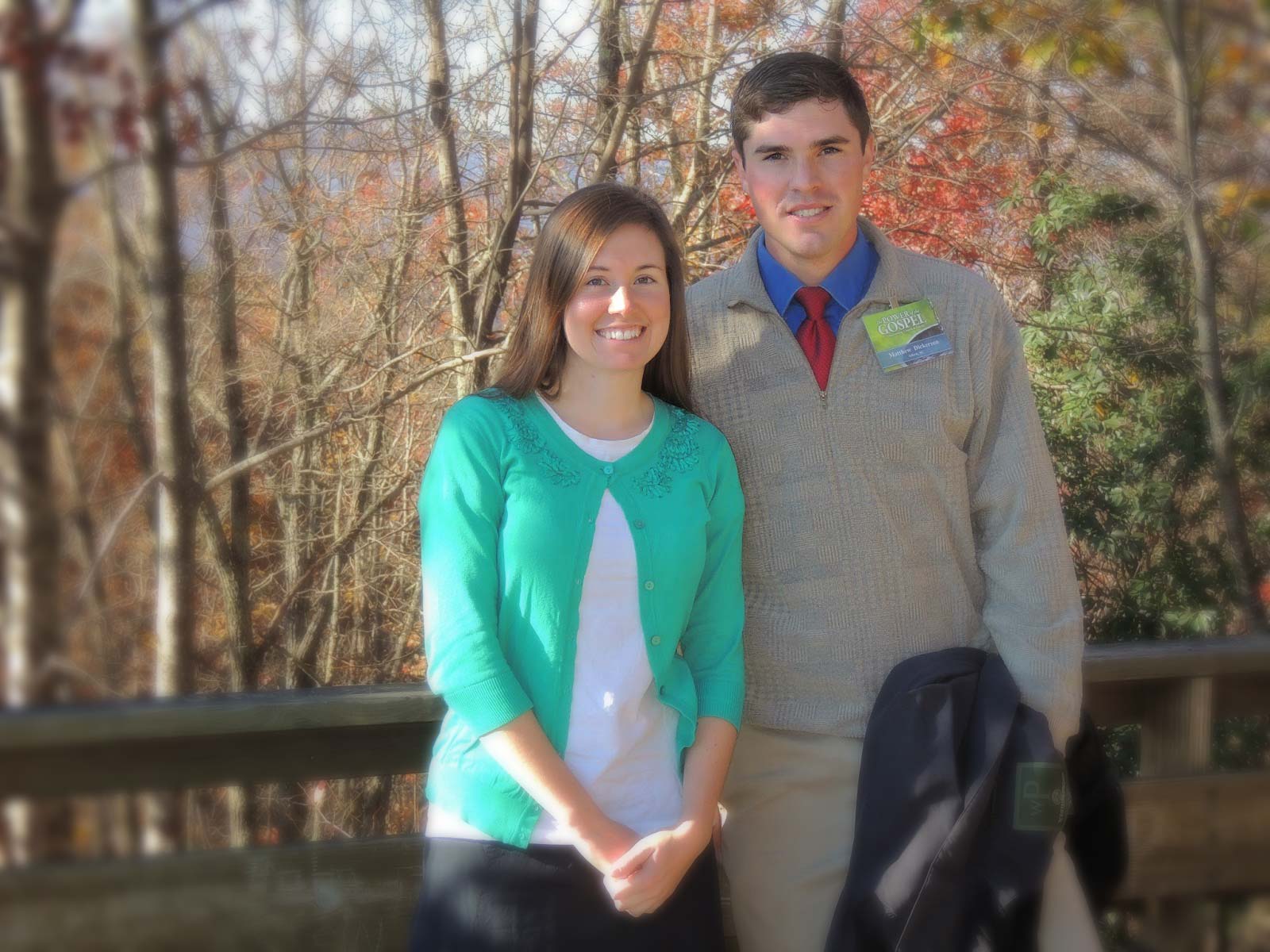 This Shindig love story has been excerpted from Kelsey’s blog.  www.FarmingTheCarolinas.blogspot.com

So, how are all of you out there in Blogger Land? As many of you may have noticed, Kelsey hasn’t been blogging much lately, but that’s all about to change… you see, we (yep, that’s right—the two of us) have a beautiful story to tell.

It is a story of how the Lord works in the lives of His children, how no details are too small for Him to have His hand in, and how He opens doors that no man could ever open.

Okay… let’s back way up. We’re going to fill you all in from the beginning.

Kelsey: It all started when our family attended the No Greater Joy Smoky Mountain Shindig at Ridgecrest, back in September, the 10th–14th. One of our goals in attending the Shindig was simply to meet “new fish in new waters,” so to speak. We had wanted to attend the last two Shindig events, but they were both too far for us to travel, so when we heard that this one was going to be in North Carolina, we signed up right away! It was a lovely week filled with lots of good sessions, friendly folks, fun games and good music. Each night, after the congregational sessions were over, everyone split off into separate divisions, with all of the 17 and older singles in a group of their own. Lots of games were played that tried to get the girls and guys talking to one another, and it was crazy, but a lot of fun. While we were there I met a lot of nice young men (and young women for that matter), but no one who really stuck out in my mind as being “Mr. Right,” if you know what I mean. It was a wonderful weekend, but I came home thinking, “well... maybe next time.”

“But seek first the kingdom of God and His righteousness, and all these things shall be added to you. Therefore do not worry about tomorrow, for tomorrow will worry about its own things. Sufficient for the day is its own trouble” (Matthew 6:33-34).

Illusive Writer: I discovered the No Great Joy Shindig this past winter while reading the book, In Search of a Help Meet. After I read about this “matchmaking/family conference” my first thought was, “Yep, that’s a strange way to find a wife; not going there…” I always had this idea that you meet a girl at church or at some other mutual location and slowly become good friends over time until you fall in love; so you could say I wasn’t into this “wife shopping” thing.

This past July I was out working my job, getting that lonely feeling unmarried guys often get. I wanted a wife and family, but how? And where is this elusive young lady gonna come from?

I had already met many godly young women, each of whom would make some lucky man a great wife someday; but never felt like I had met a girl I knew for sure was the one for me. I was feeling slightly down about the fact that I had explored all my options, but still had no urge to pursue any particular young lady.

I prayed, “God, what do you want me to do?” Immediately, going to the Shindig popped into my head. “What, God! Really? ...that’s where desperate hillbillies go to find a wife!” Such a silly idea couldn’t be from God… or so I thought.

Over the next few weeks the idea kept bugging me until I came to grips with the fact that I was never going to get married unless I got out and met some possibilities. So with the full peace of God in my heart and a changed mind I made reservations for the Smoky Mountain Shindig!

“Whoso findeth a wife findeth a good thing, and obtaineth favor of the Lord” (Proverbs 18:22).

Kelsey: A lot of the talks at the Shindig were focused on missions. My heart has been toward missions since I was 13, so this conference was right up my alley. I have always had it in my mind that I wanted to marry a missionary, and despite my family and friends telling me to keep an open mind, I was pretty set on that idea. While I was at the Shindig, I made it my goal to speak to Kelsey Steele, missionary wife in Ukraine, and ask her some things that had been on my heart, as well as ask her opinion on my situation—because if anyone would understand, she would.

Towards the end of the conference I got my chance to speak to her. She advised me to stay open-minded, to not close out the idea of marrying a plumber simply because of what I felt. She told me to pray about each situation individually before I just said no to a young man. It wasn’t what I wanted to hear at the time, but it was definitely what I needed to hear.

For the days following the conference, the Lord really began working on my heart, changing the thought process that I’d had for the past 10 years. The Lord was asking me to give up my dreams and plans that I had made for my future and simply trust Him with it.

Up on the lookout

Illusive Writer: The Shindig came and went. I heard many great sermons, met a lot of families and made new friends. All in all I had a great time.

As you might be asking, “Well, did you meet any particular young lady?” Umm… no. I met many great, godly young women; they were everywhere! “Then why didn’t you pursue any of them?!” I know! I asked myself the same questions. I wanted to follow the Lord’s leading and it just wasn’t there. I’ve been told by many married men, “You just sorta, know.” As if that is supposed to be helpful. *sigh*

Despite not coming back from the trip with “the one,” I felt the weekend went well and I had a great time.

Before leaving for the conference, I had become part of the No Greater Joy Shindig discussion group on Facebook to keep connected with other fellow shin-diggers. A few days after the event, I was scrolling through some of the photos members had been posting from last weekend when suddenly—boom—there she was! This girl I had never seen or met pops right out of a photo and slaps me in the face! That special girl in the photo was Kelsey Hammond.

This was “THE” photo! She wasn’t even the subject of the picture I had found her in; she was in the background. I searched and searched all over Facebook, but I couldn’t find her! (Turns out she’s not on Facebook) Luckily, her father is; he tagged her in the photo. Ka-ching! I now had a name! Oh, but wait a minute—what was I thinking? I didn’t know this girl from Eve!

It took me a moment to realize I was going crazy and running from all reasoning. Besides, there are a lot of pretty girls on Facebook. For the sake of sanity I would just forget all about it. ...Right! (said sarcastically)

Three days went by and this picture of Kelsey was permanently branded in my mind and I couldn’t get her out! I had no idea how old she was, what her character was like, or even if she was already married! And to think, I was actually considering contacting Mr. Hammond!

I could no longer hold my peace. I got on Facebook chat and began my letter of intention. I wrote “Mr. Hammond” then hit “enter” and suddenly realized it was set to send the message when the “enter” button was hit! A few seconds go by and I get a reply “yes Matthew?”

Kelsey: On Thursday night, September 18th, four days after the Shindig, Dad and Mom called me into their room and informed me that a young man by the name of Matthew Dickerson, who had also attended the Shindig, was interested in getting to know me better. I was shocked. I had never even met him. I recognized his name, because he was on the Shindig Facebook page, and I knew he was the guy playing the dulcimer at the Shindig, but that was all I knew of him. I had read some of his comments on the Facebook page and thought he sounded like a very wise young man. But when Dad said he was interested in me, I was floored! My parents asked me what I thought and I told them that I would have to pray about it. I didn’t know much about him, but what little I did know interested me greatly. *smile*  They thought I would have said no to him right off the bat because he wasn’t a missionary. I hadn’t shared with them how the Lord had been working on my heart prior to this and so when I said that I would consider him, it was their turn to be shocked. So that night we all took it to the Lord in prayer to see what his will would be in this.

After praying about the situation, I felt absolute peace that the Lord would have me get to know Matthew Dickerson better. I still didn’t know where all of this would go, but every time I took the matter before the Lord, He would give me His indescribable peace that this was His will and to simply follow His leading. Along with the Lord’s peace about the whole situation, He also gave me an excitement for what He had in store …an excitement that goes beyond description. So I gave Dad the go-ahead to get to know Matthew better.

“Be anxious for nothing, but in everything by prayer and supplication, with thanksgiving, let your requests be made known to God; and the peace of God, which surpasses all understanding, will guard your hearts and minds through Christ Jesus” (Philippians 4:6-7).

Matthew (the Illusive Writer): Turns out Kelsey wasn’t married yet or even being pursued. She was a good bit shorter than me and wasn’t under-aged or over-aged (I’m not sure what that means so I’ll leave that for you to decide). She was just right—four months younger than I am!

After initially chatting with Mr. Hammond over the phone and sending him a more “official” letter of intent, I waited patiently to get a response from the little miss. Waiting with sweaty palms and an accelerated heart rate, I finally got the call from Mr. Hammond, telling me that Kelsey accepted the inquiry and wanted to pursue the relationship! I was in shock!

“Who can find a virtuous woman? for her price is far above rubies” (Proverbs 31:10).

Kelsey: Dad spent the next three weeks getting to know Matthew, asking him all the hard questions, and not only that, but also just figuring out what kind of guy Matthew was, what his likes and dislikes were, his character traits, his beliefs and such. I was third party to all of this, hearing from Dad how things were going. The waiting was not easy! I am always the first to know what is going on in our family, so to not be personally involved in the conversations that Matthew and Dad were having was hard on me, but I reminded myself that “patience is a virtue.” During this time, I just kept praying that the Lord’s will would be done through it all.

Matthew: Everything I learned about Kelsey and how God worked out our situation was nothing short of a miracle...