Filter by:
NGJ Magazine / Articles / God's Amazing Grace
Do you get our FREE Magazine? 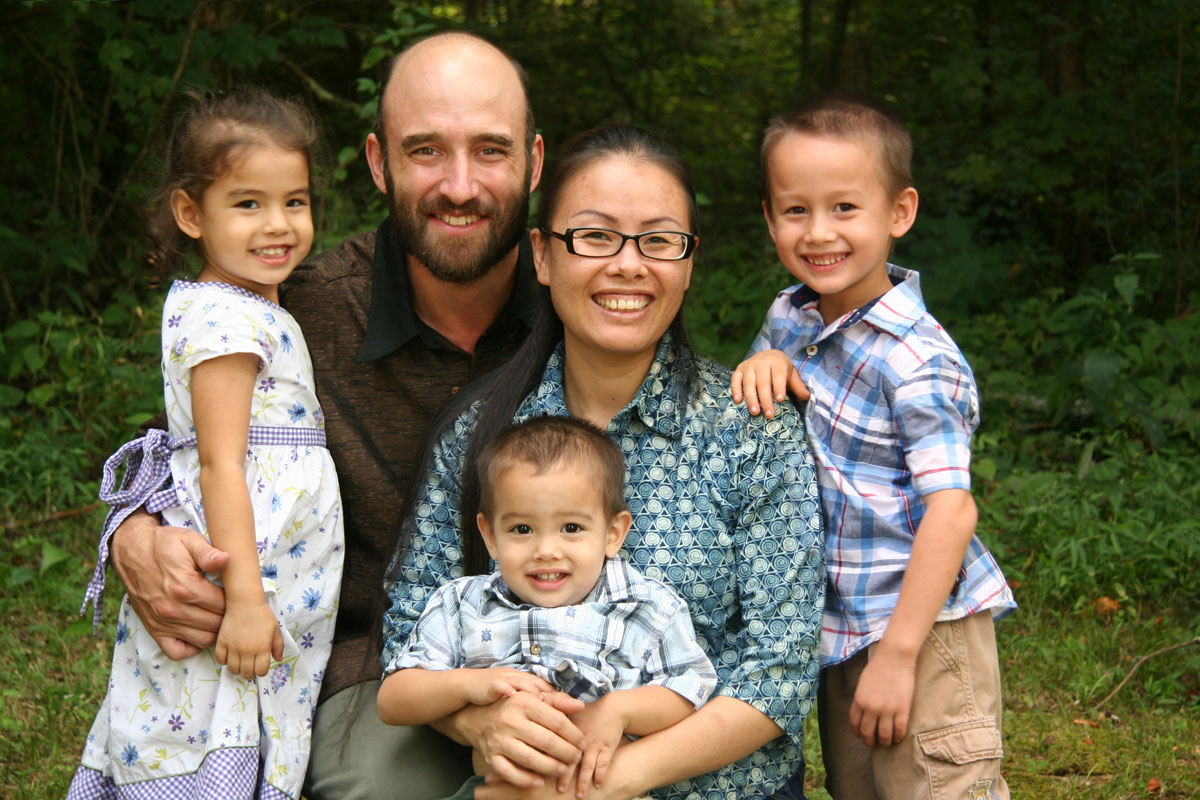 "I am TJ S******...and for the last 10 years have been working toward translating the Scripture into the ******* language of Southeast Asia."
TJ and his family are home on a short furlough, enjoying the fresh country air and their great American freedoms. He has been successful in getting a good portion of the Bible translated, and is looking forward to finishing it. His “sticky rice gang” has caught a vision for their country and are planning some great things in the near future – with God’s help.
I am TJ S******, husband to Kham, father of Jedidiah and Tabitha, and for the last 10 years have been working toward translating the Scripture into the ******* language of Southeast Asia. I was NEVER a good little boy, and I was NOT from a Christian home.
My family first met Michael Pearl about 16 years ago. I was then just an 18-year-old hillbilly freak with a long ponytail hanging down my back. My parents and I were dope heads living with my 3 younger siblings in an old broken-down school bus that we had jacked up on blocks. We grew a weedy garden which included marijuana. Two years earlier, my dad and mom started reading the Bible together on their long commute back and forth to work, and Dad figured he could get saved if he could just find a Jew that would tell him how to know God. I remember him calling Israel once looking for someone to talk to about God, but ended up talking to a nun who barely knew English and thought he was asking the price of eggs. We all laughed for days about that.
Later, my dad was visiting an Amish minister, trying to convince him to start a commune, when Michael Pearl came into the house and joined the conversation. He turned the conversation almost immediately to Christ. A few weeks later, my dad and I met Mike at a home Bible study. It was a mixed lot of people from different beliefs, all trying to convert each other. They took turns preaching their points of view. When it came Mike’s turn, he just preached Jesus. It was that night back in the Spring of 1990 that I understood the Gospel for the first time and was joyfully born again. Dad was speechless, and had no idea what to say after hearing what GOD HIMSELF had done to save us. Later that week Mike, came down to our camp, and while sitting around the evening fire together, he began to teach us the book of Romans. He came several times every week for months.
We still spent our days hunting, fishing, smoking dope, and talking about what we were learning from the Bible. My dad really wanted to know the Lord, but years of confusion and sin made it hard for him to understand. I was just a young man, so I sat back out of the way, but I listened and began to understand more fully God’s entire plan for mankind and His program of events from Beginning to End. Even when our pack of German shepherds attacked Mike one time, chewing him up pretty good, he still came to teach us the old, old story of Jesus. Before the year was out, my family had all come to understand what forgiveness of sin through the shed blood of Jesus meant to them personally.
My younger brother, Bob (10 years old), and I worked all winter with Mike and his two boys cutting hickory sticks. Bob and I continued to spend a lot of time with the Pearl family. Teaching, Michael was always teaching, mostly the Bible, but also just life-type stuff.
I remember us S****** kids getting into an argument with the Pearl kids about their saying they had never once seen their parents fight. I figured they were just lying to protect their folks, as I had done so many times. The idea of parents not fighting was so weird, we just didn’t believe them. To the Pearl kids, the idea of grownups fighting was weird. We were learning about life, about God, and we were in training to become men of God.

The Pearls were intrigued with our family, because even in my parents’ lost state and amid all their drugs and fighting, they had raised four kids who loved, respected, and appreciated them. Mike was just beginning to put together ideas and concepts that would later be in his book, To Train Up a Child. He would often question us, trying to put into perspective how some saved parents could have children who hated their parents, yet other lost, hell-bound parents could raise emotionally stable, thankful children. I think most of the answer is to be found in the extreme amount of time Dad spent with us kids. We were HIS kids, and he was bound and determined to get his money’s worth of pleasure and enjoyment out of us, and, in fact, was a financial failure because of it. Dad gave us himself, his time, his mind, his life. It made the difference. To this day Dad still isn’t wealthy, but he does have the hearts of his 4 kids, all of which have the Kingdom of God for our inheritance.
My dad has always loved Mike with a love much like David and Jonathan. When To Train Up a Child first hit the market, Debi Pearl didn’t have a clue as to how to keep up with the thousands of orders, so for months, maybe even years, my parents volunteered to crowd into their tiny office, type the names and addresses into the computer, package the books, and get them ready for shipment. Dad wanted to be a part of Mike’s ministry. He wanted to give back what had been given to him. When the house office could no longer hold the growing ministry, my dad argued Mike into letting him build a building beside the Pearl’s house using 4 or 5 neighboring rebellious young teenage boys to do the labor. Those boys became good young men that winter. But soon even that building was too small for the growing ministry. Mike still worked as a carpenter, rock layer, and hickory-stick cutter in order to make ends meet. Mike would never take money from anyone he was ministering to.
When Christmas would come around, we would seize the opportunity to give him a big country ham. The novelty of us S****** (of Arabic ancestry a couple generations back) giving Mike Pearl (of Jewish descent) a chunk of ham on Christmas was just too funny for words. Life is rich. The Pearls also fostered handicapped children all through these years. I almost felt like my brother and I were some of their extras, we were there so much.
God called me to missions about the time Michael began teaching Ecclesiastes, so off I went to Bible college and then on to linguistics training. The rest is history. The New Testament will soon be completed, and the translation of Genesis and Proverbs is finished. God willing, in just a short time, maybe 3 or 4 years, we will finish translating the whole Bible into the ******* language.
Isn’t God great, that he would take 2 old hippies, give them a son who would come to know the Lord after spending all his young childhood smoking pot, then use that son to translate the Scripture for a people half-way around the world? It seems it would have been so much easier just to pick out a nice homeschooled kid that had a good education to do the job, but then again, God gets so much glory using the weak and the foolish things to confound the world. I must testify, I cannot remember the last time I was ever tempted to take drugs. In fact, the first time in several months I’ve even been reminded of that old life was when I sat down to type this testimony. That old man has been dead, buried, and gone for almost 16 years now. If any man be in Christ, he is a new creature: old things are passed away; behold, all things are become new. Jesus is a Great Big Wonderful God.
******* language: name of language and country withheld for safety of national workers involved. **** is a closed, Communist country currently engaged in severe persecution of Christians.
TJ S******

A Wise Woman Builds Her House