Filter by:
NGJ Magazine / Articles / Grand Grandparents
Do you get our FREE Magazine? 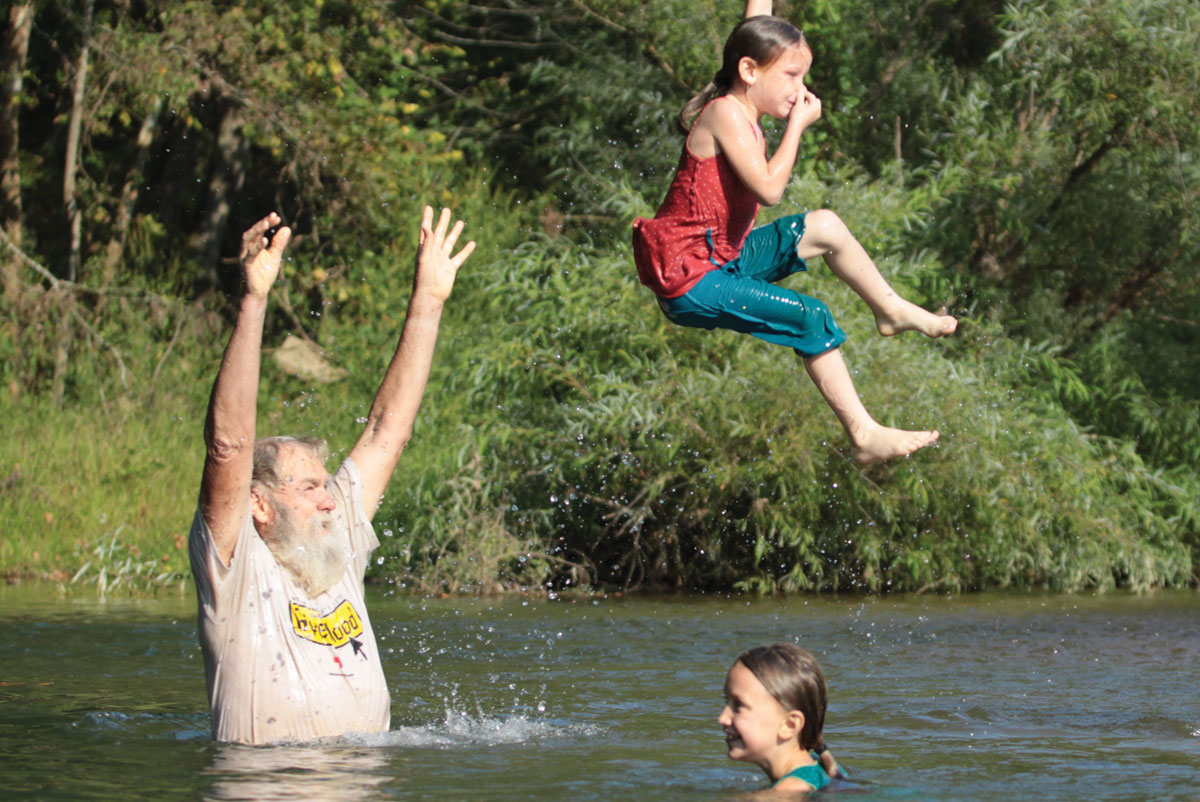 Nineteen grandkids are sometimes exhausting—wonderfully exhausting. I go to work and do physical labor to get some rest. God gave kids to young adults because they can stand up to the rigors of raising a family. But we grandparents have our own special place. We may tire and have to take a nap or send them home early, but for a time we are able to devote 100% of our attention and energy toward the little ones.

I will admit, when the grandkids are present I am useless for anything else. They make me run here and there and laugh until I am worn to a frazzle. I play music while they dance. I rig fishing poles, bait hooks, take fish off the line, and then clean them. We go for rides in the woods in my little buggy, read books, eat, go swimming, and I fall down exhausted while they turn to Mama Pearl for more excitement. She takes them to the garden or gets them involved doing house chores or taking care of the chickens—things like shelling and grinding corn or changing the water.

Another benefit of being a grandparent is that we don’t have to see the kids at their worst—bored, hungry, tired. Nor do we bear the primary responsibility of training. They are pretty well-trained by the time they are big enough to hang out with us. But we do have a great responsibility that falls to us entirely. We should guard against spoiling what the parents are trying to instill in their children. Grandparents can be a great blessing or a curse to their grandchildren. So I am going to give you the three laws of grandparenting.

1.)  Always communicate great respect for the child’s parents and deference toward their rules and manner of raising the kids. There is a tendency in grandparents to compete for the affections of the kids by denigrating their parents. It is a subtle thing that those who are doing it would deny. Satan denigrated God by asking Eve, “Yea, hath God said?” “Did your parents say that? Why would they say that?” The implication is that I, the grandparent, would never deny you something that would make you happy. Any attempt to embrace the children by loosing the embrace of the parents is an evil of great magnitude. It does not hurt the parents nearly as much as it does the children, for parents are God’s surrogate potentates, representatives of all law and justice. To diminish respect for parents is to diminish respect for authority. It makes rebels of the children while giving the grandparents a false and temporary sense of being special.

2.)  Never say, “Now, don’t tell your parents.” It seems like an innocent bit of intrigue to develop a club-like atmosphere of “us and them”; it makes us appear to be a special group that maintains secrets from the rest of the world, especially overly-rigid parents who would deny pleasure to their children. But it is not innocent or harmless. It may be fun to the grandparents to form a secret club of junk-food eaters, TV watchers, or whatever with the children, but the expense to their character is too great. Secrets from authorities are lies, and rebellion breeds a worldview that says “live in pleasure regardless of what the authorities say, for they cannot be trusted to seek your best interest. And when the rules don’t suit you, just do as you please and keep it a secret from those in oversight.” As a child relates to his parents, so he relates to all authority, including God. If you loose a child from the moors of authority in order to tie them alongside your boat, the day will come when he will cut loose from all in the safe harbor and sail into a storm from which he will not return.

3.)  Never second-guess the parents’ rules regarding food, dress, entertainment, etc. God gave the parents the responsibility of raising those kids. He gave you a rocking chair and lots of idle time. Don’t let your idle time become the devil’s workshop.

Never allow the children to violate the rules parents have set down. If they say no TV, that is final. If they say no playing with the neighbor kids, stand by it. If they say no climbing in trees or no bicycle riding on the sidewalk, then it is the law of the Medes and Persians. When we allow a dispensation of lax law, we communicate the concept that law is arbitrary and capricious. We grandparents must be surrogate parents in the image of their own parents.

I remember as we raised our children, we tried to deny or severely limit their intake of junk food like candy bars and Cokes. But they loved to go to Grandma’s house because she kept the junk just for them. For a while we constantly griped about it, but we soon learned that it was a hopeless battle, so we resigned ourselves to allowing them to indulge while there. That was less harmful than their being aware of our contention with the “sweet” grandparents.

Now that I have assumed the role of grandparent, I understand what drove them. As soon as the smiling kids walk in the door, I want to delight them with a treat. It does purchase a lot of immediate good feelings. But our house never contains sweet pop or candy bars. If it did, I don’t see how I could resist lighting up their faces with a dose of toxins. Yes, we are better-informed than earlier generations, but the principle remains the same. Grandparents want to purchase praise and love. But the purchase must be within the rules the parents have set down.

We grandparents are only grand when we act grandly. We can be a great blessing to our children—allowing them a little time off, a night alone, a short honeymoon once a year, a break during the day, or a place for the kids to stay while Mama is screaming, “It hurts too much; this is the last baby I am going to have.” So let’s perform our roles to the glory of God and the encouragement of the parents who alone bear the full responsibility for these children.

Personal note: Most of my grandkids are better trained than were my children. It is a deep pleasure to see them all faring so well. It is like reaping the sweet fruit of many years of labor.

Spank and Save a Child