Filter by:
NGJ Magazine / Articles / Grandmother Strikes Again
Do you get our FREE Magazine? 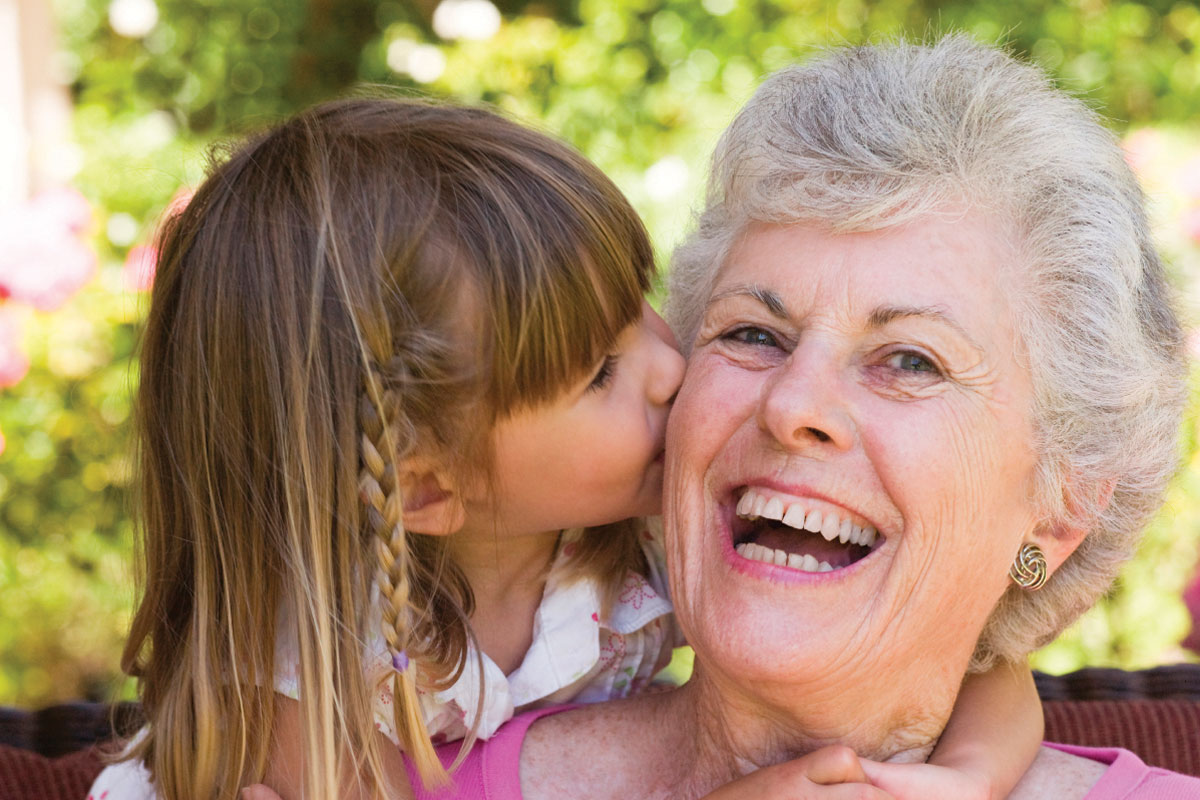 It is still a wonder! Absolutely amazing! Almost unbelievable! I first wrote about it in my book To Train Up A Child, which has now sold over 650,000 copies in English and many tens of thousands in foreign languages, but I am still amazed at the beauty and effectiveness of spanking as part of a program of effective child training. What a joy to possess the ability to instantly gain compliance and instill discipline in our children. However, the most mysterious, almost miraculous, fruit of the properly applied spanking is its ability to heal the child’s soul and create a sweetness of spirit.

It is understandable that adults who have dark memories of being “whipped” without love and “beaten” without mercy for trying the patience of their parents will not believe it is possible to spank in love and achieve sweet fruit. Likewise, parents who “don’t believe in corporal punishment” (neither do I) but often become frustrated and angry, pushed to the brink of “striking” their children, are horrified at their own out-of-control feelings. They know that if they were to yield to their anger and use their hand or an instrument to strike their children, it would be an act of violence and abuse. They are absolutely correct in their personal assessment, given their emotional state. And herein is the cause of so much misunderstanding and anti-spanking sentiment.

It is one thing to know yourself and to know that you are provoked to a spirit of abuse and so respond by choosing not to spank your child, which is the right decision for you. But it is another matter altogether to project your out-of-control anger on all parents, assuming that everyone is like you, teetering on abuse. I wish you could spend just one day with a well- balanced, emotionally mature family with eight children, all under 12 years of age, which practices Biblical child training. You may consider yourself “anti-spanking”, but you would go away weeping for your loss, longing for such beauty and joy in your own family. You would say, “What a fool I have been.”

Do you think my claim too fantastic to believe? I can give you our own family’s testimony. Would it help if I shared the testimony of a million of our readers who experience the same joy and peace in their families? What if my children, now grown, with children of their own, were to testify as to the fruit of their upbringing, as they have in writing? Add to that the testimony of two million young adults who were trained up in the way they should go by loving parents who did not spare the rod and did not spoil the child’s creativity, confidence, joy, stability, independence, or love and loyalty to the family? Can you believe that there may be a world bigger than your own, one where anger does not rule and peace and love is the order of the day?

I know the argument, “But what about all those hypocritical religious bigots that use the Bible as an excuse to beat their children and intimidate them into compliance, leaving them emotionally scarred and prone to pass on the abuse?” I agree that this is a big problem for a few. The argument continues, “So shouldn’t we outlaw all spanking so as to prevent abuse?” Further, Christian ministers who promote the Biblical principles of corporal chastisement are blamed for the misuse of it.

Think rationally for a moment. If all ministers right now were to begin teaching against all forms of corporal chastisement or punishment and all states and governments of the world were to pass laws against it, would parental abuse cease? Is the tendency for some parents to abuse their children found in misapplying principles they have been taught, or in human anger and aggression? Everybody in the Western world teaches against a man hitting his wife, but it doesn’t stop wife beaters. Only in the Muslim world does wife beating begin as a doctrine. The Christian world has condemned it for 2,000 years, but it still occurs at about the same rate as beating children. No godly Christian man beats his children. No emotionally stable atheist beats his children. Child abuse does not begin as a doctrine or principle of training; it begins in the heart of an out-of-control human being—a fault of the human condition since Adam chose to live without God.

If one searches the internet or watches the news closely for an entire year, one can find a half dozen examples of a man or woman justifying their abusiveness on grounds of Biblical principles. Likewise, Americans who commit hate crimes or acts of terrorism, like the Oklahoma City bombing, will justify their murder on grounds of patriotism. We who are truly patriotic are not fooled by their excuse, nor does it deter us from our more enlightened patriotism. Why then would we, who love our children and have found Biblical chastisement a sound child training tool, be deterred by the rare examples of those twisted souls who are abusive by nature?

Since I can’t arrange for my sincere critics (I’m being charitable) to spend a day “embedded” with a happy family of ten who practices corporal chastisement, I will give you a recent example that occurred within my circle of friends, a grandmother’s experience with her three-year-old granddaughter. Apparently the parents had been slipping in their training, for their little one had become self-willed and expressed an attitude of resistance to authority. Even when everything was going her way and no one was trying to tell her what to do, she looked unhappy and was quick to take offense at the other children. But the grandmother said the most disturbing thing was that she pulled away from overtures at fellowship. “Unhappy and moody” was the grandmother’s summary of the child with whom she would spend the day.

It had been many years since the grandmother had trained her own children, and she was out of practice. She described herself as “having grown soft.” But after her children were grown, she had read To Train Up A Child and realized it was exactly the way she had trained her children.

It is a fact that grandparents who do not spend hours every day with their grandchildren tend to be soft on the discipline. But then, it is not their responsibility, and they want what little time they have with the kids to be positive. That’s what makes grandparents spoilers.

After a couple hours of futilely trying to cheer up the child, grandmother began to remember the “miracle” of the rod. So she made up her mind to do what she did not feel like doing—obey God and love the child with a spanking. She tells how she calmly explained to her granddaughter how she had a bad attitude and then took a wooden spoon from the kitchen, slowly applying it to her backside. The licks were not hard and not hasty. At first the little girl kicked and screamed in protest, but old grandmother was too wise to be intimidated. As she spanked she explained to the little one that this is how she had trained her mother to be sweet and cheerful, and that she would grow up to be smart and obedient. She kept up the slow spanking and the admonition until the anger and resistance melted and turned into a beautiful spirit of surrender.

I understand that if you have never seen this, you have no idea what I am talking about. It doesn’t seem reasonable that any kind of a spanking would produce peace and love in a child, but it is the miracle of corporal chastisement properly administered.

The little one rose from the altar of chastisement and hugged her grandmother for the first time that day. She smiled sweetly and for the rest of the day was entirely cooperative and compliant. Where she had been unhappy and griping, she was now as cheerful as a puppy. She stopped whining and complaining about the other kids. Grandmother said that the child’s whole world went from cloudy and stormy to sunshine and flowers.

Grandma went on to express her rediscovered wonder at the power of Biblical chastisement, for after two weeks granddaughter still maintained a close bond with her grandmother, always cheerful and ready to give a big hug.

I wrote the book on it, so to speak, but it has been well over fifteen years since I applied the rod to a stubborn backside. I think that if I started another family (don’t even think about it) I would have to go back and read my books and listen to my videos to put this old softy back in the position of acting responsibly toward the little ones. I commend this grandmother for having the—whatever it is old grandmothers have—to lay down her sentiment and bring peace to a little child.

Finally, to our critics, why must you persist in stereotyping Christians who continue to practice the Biblical principles passed down to us from our fathers and their fathers back to the beginning of humanity? Our fruit far surpasses anything you can imagine. It is the sanity and emotional balance of our children that is the hope of tomorrow. Our children never need Ritalin. We don’t need Prozac. Our families grow up to make significant contributions to society. They are never drug addicts and they don’t need to take welfare, for our well-disciplined children are the ones who will start businesses and contribute to charities.

We are not timid of your criticism, and we will not hide in the dark. We proudly proclaim that we are the parents of the best kids in the whole world, thanks to sound child training principles we gleaned from the Bible and reason. When you attack our cake, we just bake another layer and display it all the more proudly.

I pray that you will be reasonable and join the “good guys,” for we will not bend, bow, or burn.

If you are new to these concepts and want to investigate further, purchase our books To Train Up a Child and In Defense of Biblical Chastisement or read hundreds of articles on these subjects.

—Michael Pearl and an unnamed granny

How to Teach Your Children to Know God