Filter by:
NGJ Magazine / Articles / Hands-On Boys
Do you get our FREE Magazine? 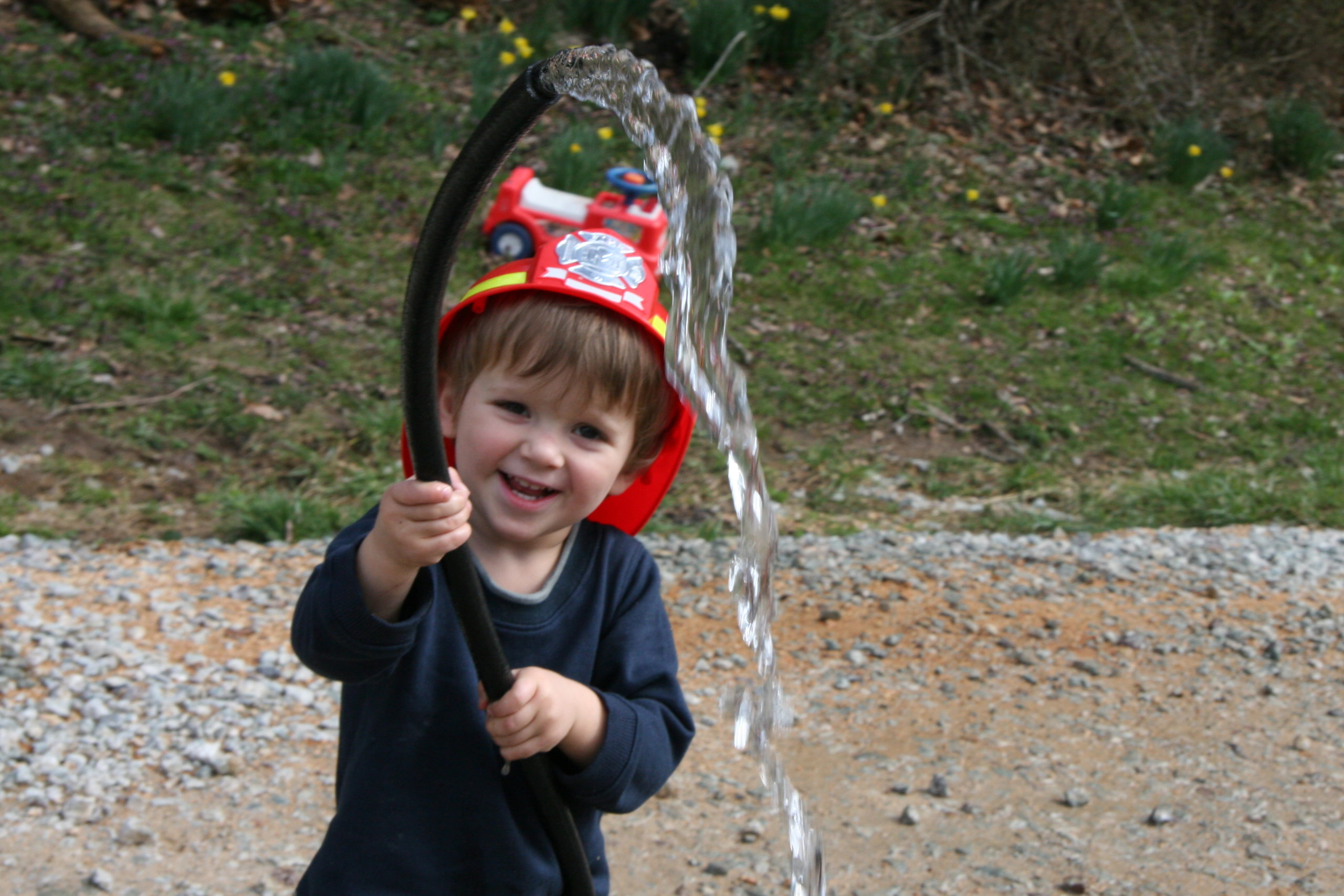 Most men work with their hands. Even whose who are stuck with an office job tinker around with a lawn mower or garden on the weekends.

Boys have a natural inclination to want to investigate, discover, and build. Every parent, including single moms, can answer this call by providing for their son some junk…yep, you read it correctly…junk.

Allow your boys time and space to build things out of cardboard boxes, discarded wood, nails, hinges, wheels, rope, gears, motors, bikes etc. “Junk” is several steps up from Legos, Lincoln Logs, Erector Sets, and similar prefabricated learning toys. It’s more like real life, where it doesn’t all fit together so perfectly and you have to use your imagination to improvise. And it never gets boring. Real stuff has to be cut and drilled, sanded and fitted, carved and shaped, glued and clamped, torn down, tied together, rebuilt and bolted in, cleaned up and soldered, welded, sanded and painted. And the great thing about boys creating something out of junk is that they are allowed to make a wrong cut, or some sort of “oops”, without wasting what would otherwise be expensive and important material. There is no condemnation in failure.

Messing with junk is an inexpensive way to allow them to develop confidence and creative imagination. Furthermore, when a boy is consumed with his latest project, he will not be wanting to watch television or play some electronic game. He will be highly motivated from daylight to dark, rising early to “get back to work.”

I was recently speaking with my older brother Chris, whose parenting I highly respect, and he recalled his early experiences of “playing“ with junk as a kid and how he developed strong mechanical skills at an early age. So I asked him to write about it and to tell us what he’s now doing with his six boys.

When I was a kid, my mom used to give me old junk appliances, radios, blenders and all sorts of stuff to take apart. I remember that, at first, I could never figure out how to get the stuff open, so I would take a hammer and break it to see what was inside. I didn’t understand what all the different stuff was, but I remember I liked breaking the old tubes inside TVs because they made a loud pop (Later they told me that was pretty dangerous.)

The junk kept arriving, and in time I learned how I could get it apart with a screwdriver and other simple hand tools. As I continued, I learned to pull off switches and buttons to make my own inventions, like an electric shocker doorknob to surprise my younger brother (Later they told me that was pretty dangerous, also.) As I got older, my interest shifted to cars and motors. I knew very little about how an engine worked, but was offered the opportunity to work for a well-respected mechanic who lived nearby. I started out just washing parts and cleaning up, but before long there was a blue AMC Hornet that came into the shop. I will never forget it. It started up, but it ran rough and choppy. My boss diagnosed the problem and did a lot of work on the motor, expecting to solve the trouble. But still, it continued rough and choppy. Twice this happened, and the second time my boss got mad and took a trip into town to get something, leaving me there alone with the car.

As I sat there thinking it over, I considered what I knew about how an engine worked, and what might be happening. Then it occurred to me, “Maybe the exhaust is plugged!” So I proceeded to disconnect the exhaust to see what would happen. Sure enough, I was right. I had solved the problem, and gained the respect of my boss when he returned. Those were important years for me, even though I didn’t pursue a career as a mechanic. When people hear about the many things like this that I have done, they say, “How did you know that?” But as I’ve thought about it, it’s really not so much about experience and knowledge as it is confidence, confidence I had gained much earlier, through tinkering with old appliances.

What happens then when the microwave oven doesn’t go on, or water doesn’t come out when you turn the handle at the sink? The standard answer is “Time to buy a new microwave!” and “Call the plumber.” I know many of you are thinking or saying, “I have more important things to do with my time.” But your sons are not going to develop confidence and self-reliance in practical living if they are not exposed to creative repair and construction.

There will be many broken items that we dads cannot fix, but at least we will know what went wrong, and we will not be at the complete mercy of the repairman. The first response that runs through the mind of a man when the microwave doesn’t come on should be, “Let’s open it up and see what’s wrong with it,” not “I wonder how much a new one will cost me?”

Father, and even single moms, you may protest that you are too ignorant to fix anything. Don’t be afraid to do something just because you have never done it before. Start out with some of your old junk, like a broken vacuum cleaner, blender, food processor, or fan. If you don’t have any of this stuff and you don’t want to wait around for yours to stop working, talk to a friend or neighbor or go to a second-hand store or a garage sale and buy something just to “tinker with it.” If you have a friend who is a bit handier with repairing things, he’s likely to be able to answer your questions or steer you in the right direction. Try setting apart a couple hours every week just to tinker together on a project with your boys. We do this a couple times a month on Saturday mornings.  We invite any young boy who has any desire whatsoever to work in the shop with us. We have done things like fixing the recoil on a chainsaw, taking apart old appliances, pulling the motor out of a truck, tearing apart a small V-6 engine and learning how all the parts work together. We’ve also built a basement bedroom; and currently we’re tearing a Jeep down to its frame and rebuilding it.

My brother Chris went on to tell me a story about his two oldest boys, Zach and Sam, ages 14 and 12: A woman from church pulled into their driveway with a couple boxes of brake pads, asking if they could help fix the brakes on her car. Zack and Sam jacked up the car, and totally completed the brake job from start to finish, as my brother watched in his clean church clothes. “I didn’t get a spot of dirt on me,” he recalled with a grin. “They really did it all. All I did was make sure all the bolts were tight enough when they were done.”

Not every boy is going to choose to work with his hands when he is grown, but I contend that it’s a much more constructive way to raise boys than allowing them to “play” with those “sugar-toys” I see advertised out there. I’ve generally kept that candy-colored trash and those electronic nuisance-toys out of my house. I think it creates a buzz that runs contrary to natural order. Besides, the abundance of it in a home leaves less room for a child to be creative with scraps of wood, cardboard, or other available resources.

Recently, my 9-year-old boy wanted to give his sisters a ride around the driveway in the wheelbarrow, but he found that it was still a little too big for him. So he went ahead and made his own wheelbarrow out of some scrap wood and a junk wagon wheel. He was pretty tickled to show me what he had done, and I savored the revelation of his spawning ingenuity. My friend’s son (13 years old) showed me the beginnings of a pontoon boat he’s building out of wood from his dad’s sawmill. His first attempt sank to the bottom of the creek, but he’s back at it, working out a better design. These boys are being taught to use real tools and materials, overcome difficult obstacles, and to solve real problems.

If you see the value of raising “hands-on boys,” then be a “hands-on dad.” When a parent allows their child’s course to be set by the wind of chance, the current of the Nile, or the vapor of mere academics, they’re either praying for an unlikely miracle or are guilty of neglect. So, train up your boys in the way they should go, and a few positive experiences can lead to a few thousand more. Watch over them. Teach them to be safe. Help give them what they need to succeed, and let their appetite for manhood begin!