Filter by:
NGJ Magazine / Articles / "I Am Going To Kill Myself"
Do you get our FREE Magazine? 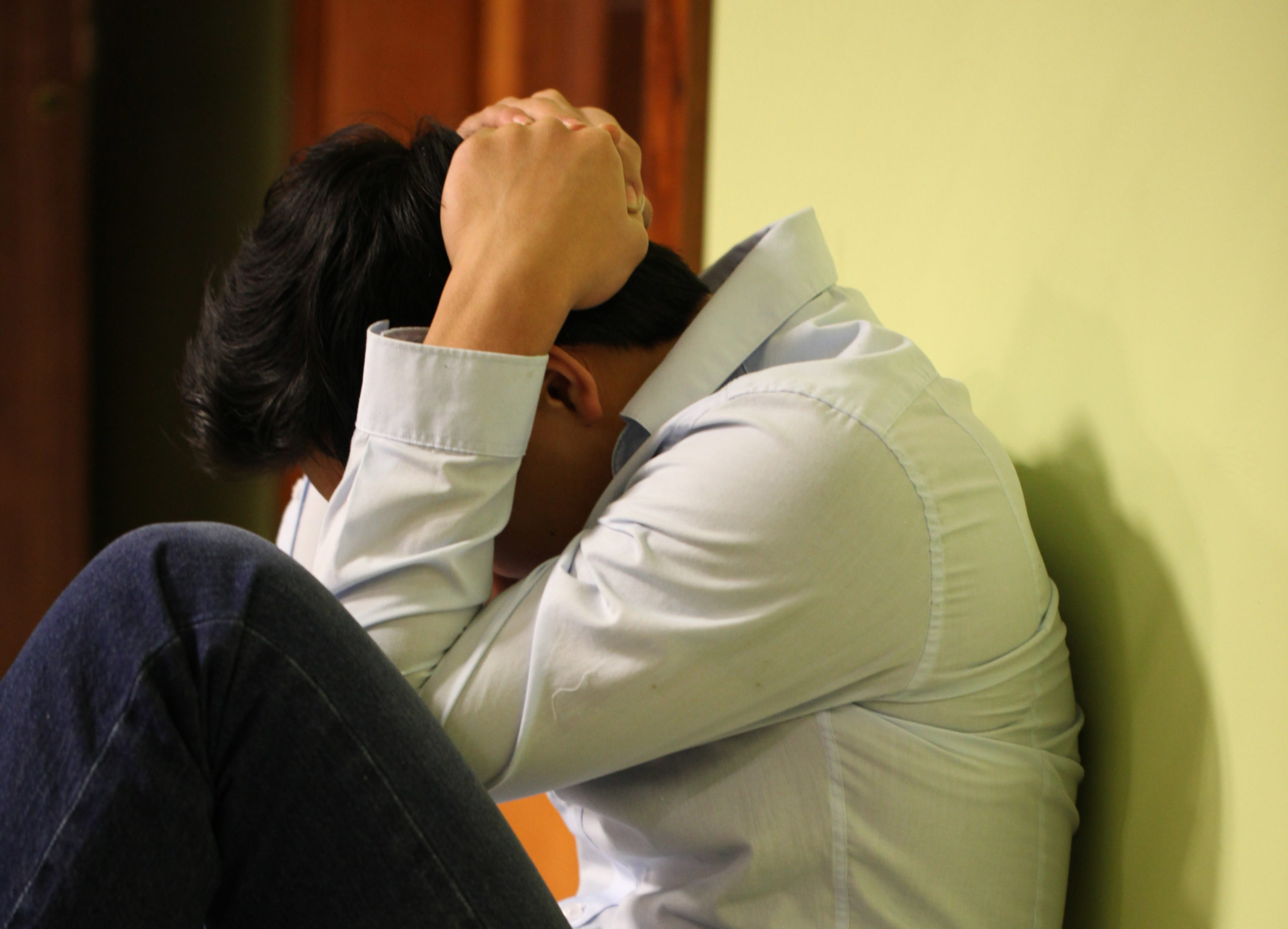 Do you believe there is hope of heaven for people who commit suicide? If you think there is then please explain in your next newsletter. I will cut out your explanation and put it with the brief notes I write for my husband, children and parents. Maybe it will help them a little bit. If you think there is no hope (personally I don’t) then disregard this letter.

I’m going to kill myself no matter what, sooner or later, one way or another. Do not attempt to ‘save’ me. It won’t accomplish any good except maybe make you feel virtuous. For someone who is hell-bound anyway, a few more years makes very little difference if indeed, you did intervene. If you’d recommend counseling, I’d probably shrug and go along with it, but in the end it’s still all the same end. I might as well go now as later.

I’m not sure yet how I’ll do it—I’d like to save my family, etc. the heartache of knowing for sure that it was a suicide. In front of a truck, perhaps?
I hate the person I have become. Here is a briefing of what brought me into this trap of the devils.

I have tried hard to cut loose but I guess I just don’t know how. I’ve fought and fought but accomplish no good at all. The devil is stronger than I and I lie defeated and at his mercy which is no mercy at all…

Through poor communication and my stubborn un-submissiveness, my little girl’s name got changed from Naomi to Fannie. She is now nearly three years old and my sin still haunts me constantly. My husband says he forgives me, whether God did or not I do not know. I do know that I have not forgiven myself. I tried, believe me, I tied. I even wrote you before and carried Debi’s note with me and tried hard to follow her advice but I still think of my sin nearly every time I call my daughter Fannie. My little girl is so much like a dear friend named Naomi (who died) as well as my husband sister who is named Naomi. Other people keep mentioning how much she is like one of them and it hurts when they say it but I think, Lay it on…I deserve every thing you can dish out and then some.
Fannie is not a nice name. Imagine being called a behind all your life. I wanted to please my mother by giving her this name but how much better it would have been to please my husband.
Therein lies my sin.

I have tried to forgive myself. I can’t. I don’t want to go on carrying this guilt. For other people’s sake I go around wearing a smiley face but it’s so hypocritical. The cup is clean on the outside but it is fitly inside filled with bitter poison more like it and it is a thin cracked cup. It bursts it’ll hurt everyone close to me. I don’t want to be responsible for dragging other with me into the anguish of hell. That is why I want to go now before I do any more damage. It will be awful for my family for a while but not so awful as if I stayed and then took them with me through my bad influence, subtle as it is.
I thought of re-changing her name, I don’t know if that would help or not but it is a long expensive legal hassle.

Mother of Fannie,
I write to you publicly because you gave me no choice. You did not give me a return address and you said that if I did not respond you would assume that my answer was that there was no hope for your soul when you commit murder against yourself. You said you would seek counseling if I suggested it. There are several things I want to say to you.

Firstly, to clarify a misconception, it is humorous that you should think the name Fannie is demeaning. The name Fannie is a Latin word, used in French, meaning “free”. Though, in English it sounds the same as the slang word fanny, which is sometimes used to mean buttocks, it is not the same word at all. One of the finest women I know is named Fannie. She is my “over the ridge” neighbor. She has birthed and trained a whole coop full of kids that are all examples of Christian duty and charity. There are more smiles in her family than buttercups in Tennessee. No one thinks of a body part when they call her name. They think of dignity and grace, duty and perseverance. Why should anyone think of your little girl any differently? Unless, of course, you murder yourself, and then she will carry the guilt of knowing that it was her name that killed you. You will give her the most horrible pain that a child can have. Your thinking is quite selfish. You say you will jump in front of a truck. What about the driver? Would you make a killer out of him? Would you give him the life time grief of knowing that he sent a woman to hell?

You said, “Do not attempt to ‘save’ me. It won’t accomplish any good except maybe make you feel virtuous.” I don’t need to feel virtuous, but I would like to save you.

Now I will answer your question, “Do you believe there is home in heaven for people who commit suicide?” The answer is that if you kill yourself you will go to hell and suffer the fires of eternal damnation for ever and forever, but not because you commit murder, for you are not and never have been a born again believer. You are only religious. That is why you have fallen for the devil’s lies.
You suppose your sin to be disobeying your husband in regard to naming your daughter. You are a sinner for many reasons more serious than that. You need forgiveness for being a self centered person who has chosen to believe the devil rather than believe God.

You said, “The devil is stronger than I am and I lie defeated.” The devil’s only weapon against you is lies. The reality is that you are blinded to the simplicity of the gospel of Jesus Christ. You try to forgive yourself when that is impossible. You struggle and fight when the battle has already been won by Jesus Christ. The devil has no power except that which he convinces you that he has through his lies. It is your guilt that gives Satan a place in your mind.

There is only one way open to you. It is a plain and sure way to peace and forgiveness. You must believe God regarding the sacrificial death of Jesus on your behalf. I will make this as plain and to the point as I possibly can.

1. You overrate yourself by pretending that your greatest sin is the naming of your daughter, when deep down inside you are unclean in every thought and act (Isa. 64:6). You ooze of pride. That you contemplate committing murder, leaving your family and the truck driver to suffer, is a statement of your utter self centeredness (Mat. 22:39). You are indeed a sinner who has offended God and are worthy of eternal damnation. There is nothing good in you (Rom. 7:18); and no reason why God should be merciful to you (Ps. 5:5).

2. Jesus Christ came into the world to save sinners just like you (1 Tim. 1:15). He lived the life you should have and did not live. He overcame the devil and his own flesh, living a perfect life (Heb. 4:15). In contrast to all the rest of us humans, after proving himself for 33 years, the perfect man Jesus was fully qualified to enter heaven as a man (John 3:35).

5. You can also know what God thinks about you the sinner by the resurrection of Jesus Christ. God accepted Jesus’ payment for sin as seen by the fact that God raised him from the dead and received him back into heaven to sit on the Father’s right hand as the overcoming man (Eph. 1:20; Col. 2:12-13; Heb. 9:12; 1 Pet. 1:21).

7. The devil, and maybe even your church, would have you to believe otherwise. There is no such thing as forgiving yourself or personally overcoming the devil. You cannot fight a battle that has already been won by our representative elder brother—the Lord Jesus Christ (Col. 2:15).

8. The last step is yours. It is called believing, repenting, giving up, trusting, yielding, calling on the name of the Lord Jesus Christ to be your Savior. You can make this complicated, as you have done, or you can confess that you are a hopeless, hell bound sinner who does not deserve forgiveness, yet one for whom Christ died and rose again. If you look inside your soul, as the devil would have you do, you will only see darkness, but if you look without to the one who died for you, there is eternal home and assurance of forgiveness (John 3:14-18; 1 John 1:9; Acts 16:31).