Filter by:
NGJ Magazine / Articles / Jeremiah, the Faithful
Do you get our FREE Magazine? 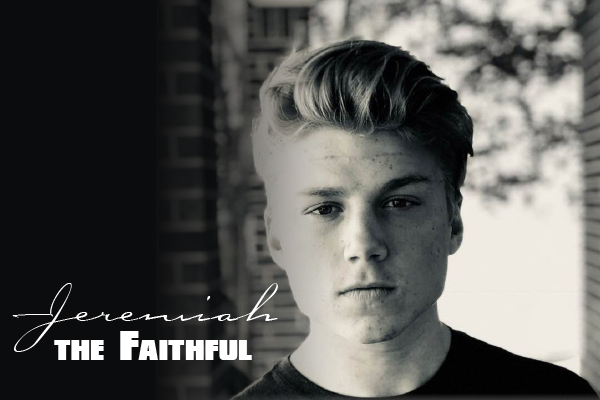 Jeremiah ran his hand over his head, half expecting his fingers to comb hair. Instead, he felt a smooth cue ball. His thick blonde hair was gone. He sighed and let his head fall back on his pillow, thinking of his diagnosis . . . his chemo . . . his Make-a-Wish. He wanted to leave this bedroom, to do anything he used to do. But he couldn’t get out of his hospital bed now that his legs were paralyzed.

Jeremiah lifted the blanket and glanced down at his chest. A large white bandage covered the 10-inch crater of a tumor on his chest. Jeremiah let the blanket fall back in place and picked up his tablet from the overbed table. He logged into his Instagram.
Why were there so many vile comments? Why did so many people hate the fact that a 16-year-old football player spoke out in defense of unborn babies?
“Cancer is about to abort you.”
“Cancer is giving your mom a late term abortion. LMAO.”
“You aren’t dead yet? God, do your job.”
One rather lengthy comment accused him of supporting “a racist, homophobic, misogynistic, xenophobic, Islamaphobic, hateful” agenda, therefore he was “garbage” and deserved to suffer.

Twitter was worse than Instagram. “See u in hell, ugly.” “Natural selection doing its job.” “He’s young, brainwashed, and mentally ill.” A meme of someone “pulling the plug” on Jeremiah. A cartoon of him dying in bed. Accusations that he wanted “children to be abused and women to die.” Threats of bodily harm. Jeremiah almost smiled as he thought, “What more could they do to me than what cancer has already done?” The Facebook page “Prayers for Jeremiah,” had horrible comments too.

The Bible describes these haters and how they think.
Psalm 37:12 The wicked plotteth against the just, and gnasheth upon him with his teeth.
Proverbs 21:10 The soul of the wicked desireth evil: his neighbour findeth no favour in his eyes.
Proverbs 29:27 ... and he that is upright in the way is abomination to the wicked.
Psalm 10:2 The wicked in his pride doth persecute the poor: let them be taken in the devices that they have imagined.
3 For the wicked boasteth of his heart’s desire, and blesseth the covetous, whom the LORD abhorreth.
4 The wicked, through the pride of his countenance, will not seek after God: God is not in all his thoughts.
5 His ways are always grievous; thy judgments are far above out of his sight: as for all his enemies, he puffeth at them.
6 He hath said in his heart, I shall not be moved: for I shall never be in adversity.
7 His mouth is full of cursing and deceit and fraud: under his tongue is mischief and vanity.

Before his cancer, when he a was a strong, handsome, football jock all the girls would love to call their own, Jeremiah stood with God against the evil killing of babies, publicly functioning as a prolife activist. And when his body was failing and death seemed imminent, instead of retreating into self-pity, Jeremiah used his notoriety to continue the fight against abortion. It was his prominence and effectiveness that provoked the Liberals on social media to spew their hate. His videotaped conference call with Governor Abbott garnered over 500k views. He also wrote a challenge to his generation, calling on thousands of young people to live for Christ. He talked with politicians from Oklahoma and Texas, encouraging them to lobby for a bill to abolish abortion. While in the hospital Jeremiah was interviewed by an ABC affiliate. He did a radio interview while on hospice with Jeff Durbin of Apologia Radio. During some of this time he was followed around by an abolitionist documentary film crew. He wanted to let his light shine into the darkness of this world until he was translated into God’s presence. A large anti-abortion publication in Italy interviewed him. The Daily Mirror, England’s second largest newspaper, ran a story on the kid from America who loved God and was trying to save babies. He did a photoshoot for The Home Educator Quarterly magazine. Then young Jeremiah, deathly sick, gave two sermons at churches and preached at a youth camp. And when he was confined to a wheelchair, you could still find him outside of Planned Parenthood begging mamas not to kill their babies.

In Hebrews 11 God commends his faithful warriors from times past. After describing what they endured, he said of them, “Of whom the world was not worthy” (Hebrews 11:38).
One day as Jeremiah read though some of the ugly comments, he said to his mom, “To have that much darkness in your heart that you’d want a kid with cancer to die, it’s a scary place to be—mentally and spiritually. I pray God will have mercy on them.”

For Jeremiah, being hated for the right reasons wasn’t bad. He knew, loved, and served the Living God. Jeremiah chose to be the voice for the unborn.

Jeremiah was a righteous rebel standing against the law when the law was unlawful. He never backed down.

The day Jeremiah departed this world and entered the gates of glory, I could almost hear Jesus say, “Jeremiah, thou good and faithful servant, job well done.”

Jeremiah Thomas was the son of Kendra and Rusty Thomas. Rusty Thomas is the founder of Elijah Ministries and National Director of Operation Save America, a national Christian ministry that equips the church to abolish abortion. To learn more about what you can do to abolish abortion, visit OperationSaveAmerica.org or Elijahmin.com.

It is not the critic who counts; not the man who points out how the strong man stumbles, or where the doer of deeds could have done them better. The credit belongs to the man who is actually in the arena, whose face is marred by dust and sweat and blood; who strives valiantly; who errs, who comes short again and again, because there is no effort without error and shortcoming; but who does actually strive to do the deeds; who knows great enthusiasms, the great devotions; who spends himself in a worthy cause; who at the best knows in the end the triumph of high achievement, and who at the worst, if he fails, at least fails while daring greatly, so that his place shall never be with those cold and timid souls who neither know victory nor defeat.