Filter by:
NGJ Magazine / Articles / Karen's Reply To Mama Bear
Do you get our FREE Magazine? 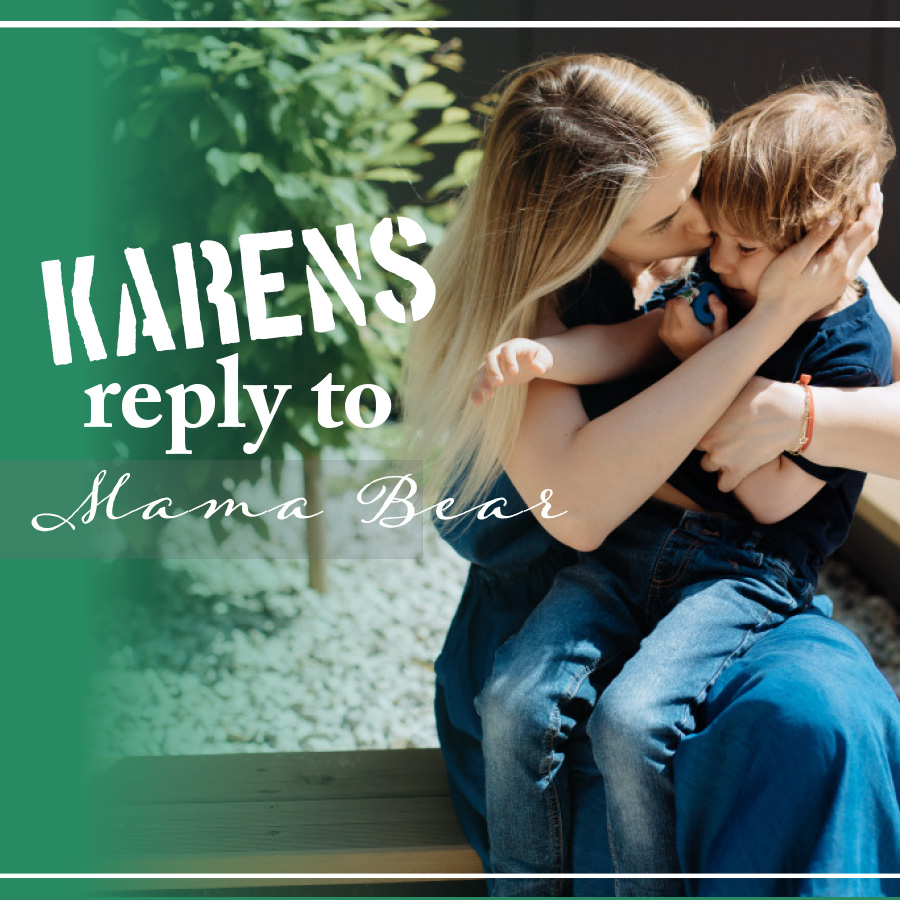 This is from Karen, a dearly beloved long time friend who also happens to be our editor. She is very wise, especially on this subject. Occasionally, we are blessed with her adding to what we have written. It is always good. ~Debi

From Mama Bear’s letter:
“I feel horrible that I didn’t say no sooner, but I thought women were supposed to be quiet and that we weren’t allowed to say no. But things got so gross and I was in so much physical pain from the abuse that I finally had to.”
From Mike’s answer:
“They (children) need to understand that they have control over their bodies”

My thoughts:
Maybe (probably) because of my own background, I feel like this is a huge issue that needs to be addressed.
Women who live in conservative, Christian circles are routinely taught that they are “supposed to be quiet” and that they aren’t “allowed to say no.” This doesn’t only apply to sexual situations with their own husbands, but all situations in the home. We are taught that as wives it is our duty to do what we are told, never argue, never disagree, never tell him his idea is dumb or unwise, never be or do anything that is contrary in any way, and always be cheerful about everything he says or wants.
Be assured little girls learn this as well. No wonder females don’t know how to say no.
So if, as Mike says, children “need to understand that they have control over their bodies,” why do we essentially teach that that ends for little girls when they marry?

1 Cor. 7:1–6
1 Now concerning the things whereof ye wrote unto me: It is good for a man not to touch a woman.
2 Nevertheless, to avoid fornication, let every man have his own wife, and let every woman have her own husband.
3 Let the husband render unto the wife due benevolence: and likewise also the wife unto the husband.
4 The wife hath not power of her own body, but the husband: and likewise also the husband hath not power of his own body, but the wife.
5 Defraud ye not one the other, except it be with consent for a time, that ye may give yourselves to fasting and prayer; and come together again, that Satan tempt you not for your incontinency.
6 But I speak this by permission, and not of commandment.

In v 3 they are rendering due benevolence (good will, giving from a place of love and grace) to each other. It’s not out of duty.
In v 4, each one has not “power” of their own body, but the other. It doesn’t say they don’t have “control” of their own body. And even if it did, it’s a mutual, two-way transaction. The husband doesn’t have more power than the wife. The wife does not have less power than the husband.
In v 5, they are not to defraud each other except it be with consent for stated reasons. Again, it’s a two-way street. It’s not just that the wife can’t say no; it applies in the same way to both of them.
I honestly believe that our conservative teaching on this is very lopsided. And I understand the issue that most men want more sex than most women, etc., but I do believe that God is protecting women here. He is giving them a voice that conservative Christians don’t give them. He is allowing women to decide what another human can to do to their body.
In a perfect world and a perfect marriage, the husband and wife each give themselves to the other in love—it’s an act of GIVING, not TAKING. I’m very thankful to have that kind of man. But I know his kind are few and far between. For the rest of the women, they need to be taught that they have some kind of voice, some modicum of agency.
Here’s what I tell young women who are about to be married: God made you to be a help meet for your husband. You are a HELP. Do you know why? Because your husband needs help. He can’t do it alone. He can’t make good decisions without your input. He can’t be all that he should be without your help. And you were created specifically to fill in the gaps in him; you are specially suited to help THAT man.
What happens if you don’t ever tell a child no? He becomes a terror. Same with a man. He needs to know there are limits to what he can do with you, to you, and on your behalf. Should you be supportive of him and his dreams? Of course! Should you encourage him and meet his physical needs? Absolutely. Should you build him up with words of affirmation and be devoted to his best interests? For sure!
But you were not made to be abused. You are a person and a child of God with dignity and purpose and you deserve to be treated as such.
Never allow your husband to act out his perversions on you if you are in disagreement with them. You have the right to say no, I will not partner with you in your filth. I will not be party to your sin.
Wife, you are not required to submit yourself to your husband’s wickedness until it gets “so gross” and you are in “so much physical pain from the abuse” that you are backed into a corner and have to say no.
You say no long before it gets to that point.
~Karen

A Cup of Tea