Filter by:
NGJ Magazine / Articles / Listen to My Dream
Do you get our FREE Magazine? 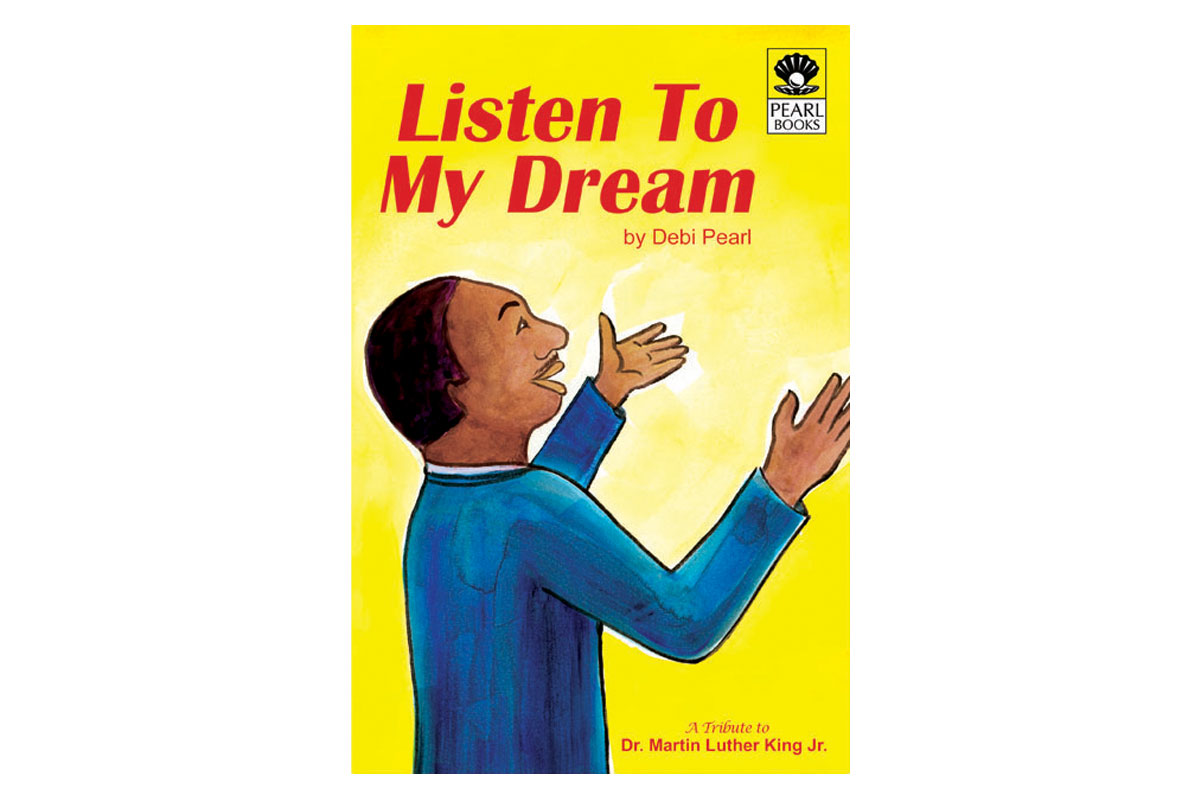 I grew up during the 1960s in a small town that hosted the nation’s largest inland military training base. I will never forget the old World War II era hospital where they treated wounded men from the Vietnam War. I worked there as a volunteer. The single-story hospital was a hallway too long to see the other end, with many 200 foot long wings—each just one room with beds closely packed down both sides, leaving a wide walkway down the middle. One wing was for the guys who had lost arms, another for leg amputees, another for burn victims, another for those who were blind. Most of the guys were just a little older than I, nineteen to twenty-one. Some would spend months in the hospital, so those who were mobile seized any opportunity to get out, even if it was only down the road a mile or two.

This was the “Old South,” before the Constitution applied to all. Here were these fine Marines who had given their young bodies for their nation, black men from places like California, Washington State, and even Hawaii. These young men had never seen a “No Coloreds Allowed” sign until the day I helped them into my car and took them for a short ride to the local dairy bar for a much-anticipated ice cream cone. The two front serving windows of the Dairy Bar had signs that read “Whites Only.” I had grown up with it. It was just the way things were in the South, but seeing through their eyes made that faded sign look ugly. Unjust and bigoted were not yet part of my vocabulary. As I parked my little VW Beetle among the other cars, I felt the angry stares. I could almost hear the people in the next car whispering, “What’s a white girl doing here with a nigger in the front seat?” They didn’t know that the soldier didn’t have legs—he lost them fighting a war for them. What I saw through their hostile eyes made me ashamed to purchase ice cream from a “Whites Only” window. Experiences like that made imprints on my soul. They caused me to pay attention to the news, listen to the speeches of Civil Rights advocates and angry white men, debate with classmates, and walk the halls of the hospital to help bring a little of home to those who would never be whole again.

It also made me look inside other people, rather than on the outside. In the coming years it would shape the way I homeschooled my own five children. I wanted them to know the truth as I saw it, and lived it… because I was there.

Fast forward 20 years. I was a young mother homeschooling five children. Somewhere we had come across an old painted over “Whites Only” sign and the children wanted to know what it meant. It opened up a thousand memories. The stories began to flow.  I told them how unjustly black people were treated when I was young. Black people were not even allowed to drink from a water fountain at the local zoo, or use the public bathrooms. I told them of the injustices I saw when as a teen I worked in a local medical clinic.  Black people had a special waiting room which was a tiny, crowded hole compared to the large, warm sitting room reserved for the white patients. The medical file for the black people was marked with a big C on the top corner so we nurse assistants would know not to call a black person until all the whites had been seen. If there were a lot of white patients, the black people would often have to go home unseen by the doctor.

My children interrupted in condemnation of the doctor. “Shame on that terrible doctor!” But the doctor was one of the kindest men I ever knew. He wanted to help the black people and would often stay late and treat them free of charge, but he too was restricted by fear of others and the unjust laws. Jim Crow laws kept the black people in subjection and also kept a lot of good white folks from doing what they knew was right. Puzzled faces looked back at me. “What was Jim Crow laws?” I knew it was time to visit the library and teach history, history that I had lived.

At the library that day in January I combed the shelves for books on Dr. Martin Luther King, Jr. I found only one worn out, very boring children’s book. I asked the librarian’s helper, “Where are all the books on Dr. King?”

The black lady’s face betrayed her frustration. “You’re looking at it.”

I went home and stewed. How could such a man, such a landmark in history, not have a whole shelf describing the things he had worked tirelessly to bring about? How was the next generation going to know unless it was in books they could read?

We read about Dr. King in some old encyclopedia, but an encyclopedia makes for dry reading. I gave up and started telling stories about what I remembered reading in the newspapers 20 years earlier.  I told them how when Dr. King was a young boy he had a teacher that encouraged him to learn new words. I got caught up in my story and started telling it in rhyme and rhythm. “There are some words I need to know, big words, neat words, words to show, how man should stand for what is right. I gotta study with all my might. There’s folks that need me waiting out there.”
My children sat spellbound. “Finish the story! What happened to him after that?” At that time in my life I had never thought of writing a book, child’s or adult’s. But right then I knew I could and would write a book about Dr. King. I was there. I saw the injustices. I saw the anger on both sides, and I saw right prevail.  Suddenly it was very important to me to make sure that the coming generations would remember the way it really was.

When I finished scribbling my prose, I ran down to my husband’s workshop and read it aloud to him. He looked up. I saw in his face I had touched his heart and spirit. What I had written was good. That evening he brought me a light table which he had made. “Your book will need art,” he said. “No one can do the art better than you can. Here is how you use a light table for copying your art.”

Most every day that winter, while my children worked through their homeschool books, I was sitting beside them drawing pictures to illustrate my story.

When I finished, my husband took his hard-earned money to a printer. It never occurred to us to send the manuscript to a publisher, nor did it ever occur to us that the King family might have legal rights to Dr. King’s legacy. I took my newly printed book to a book fair. An older black pastor stopped to read the book. Tears streamed down his face. Hundreds of people turned to look, yet he wept unashamedly. Curiosity caused others to stop to read the small children’s book. Everyone that read it bought one. Within days churches had ordered hundreds and the Memphis school system ordered ten books for each of the many school libraries. Teachers were calling wanting me to come to their classes to read the book. I mailed out thousands of free copies to any group I thought would help us get the book on the market.

Then one sad day I got a call from my attorney. The King Foundation had contacted him. I had unknowingly infringed on their copyright.

I was scared silly the day my husband put me on a plane to Atlanta. “Tell them that the libraries need books about Dr. King,” he said. “They will understand.” They did understand, but years earlier they had established legal guidelines that could not be breached. If we wanted to sell Listen to My Dream, we would need to follow the guidelines and pay a fee. It was a legal issue and we had to comply.

We had already spent all that we had and did not feel we should borrow money. Our lawyer had donated his time because he felt it was a worthy cause and believed it would in time pay for itself. It was a discouraging day. We packed up what remained of the 20,000 books, except for a handful for my private memory collection. That was in 1986. “Pearl Books” was laid aside to be forgotten—forever, we thought.

Ten years later my husband and I wrote a parenting book. This time I took a more educated course in choosing my publisher: I opened a very old Yellow Pages to the publishers section, closed my eyes and ran my finger down the page. I called the phone number closest to where my finger lay. That particular publisher wasn’t interested in our book, but their presses were idle that week, so they would give us a good price if we cared to self-publish. To the inexperienced it sounded like a great idea.

We began with one advertisement in a homeschool magazine. I also sent copies of our new book, which we called To Train Up a Child, to 30 friends who liked and respected the way we had raised our children. Within weeks we had sold out and were reprinting. The book was very successful. Other books followed on a variety of different subjects. My husband and I have now written books that have been published in over 30 different languages. Our combined writings have sold into the millions.

This brings us to now. One day last fall a young boy was milling around in my office when he located one of the few remaining copies of Listen to My Dream and asked, “What’s this little book about?” I opened the tattered old child’s book while he leaned over my shoulder.

“This book is about a man who made your life a whole lot better.”

“Me?” his dark face looked like he thought this old lady had lost her marbles, but I didn’t mind. He had opened a door inside my soul that I wanted open.

This time I have followed the correct protocol. The King Foundation graciously gave us their approval.  So here we are 24 years later, and the rest…how should I say…is history.

This is not a “Christian” book, and not part of our gospel ministry, so it will not
be published by No Greater Joy; however, we will be selling the book through NGJ, www.NoGreaterJoy.org. It is being published by Pearl Books LLC and will be available through www.ListenToMyDreamBook.com, www.DebiPearl.com and other major book retailers such as Amazon, Barnes and Noble, Books-A-Million, and others. We want our regular readers to know the rest of the story.

2 comments on “Listen to My Dream”