Filter by:
NGJ Magazine / Articles / Little Man: Then and Now
Do you get our FREE Magazine?

Little Man: Then and Now 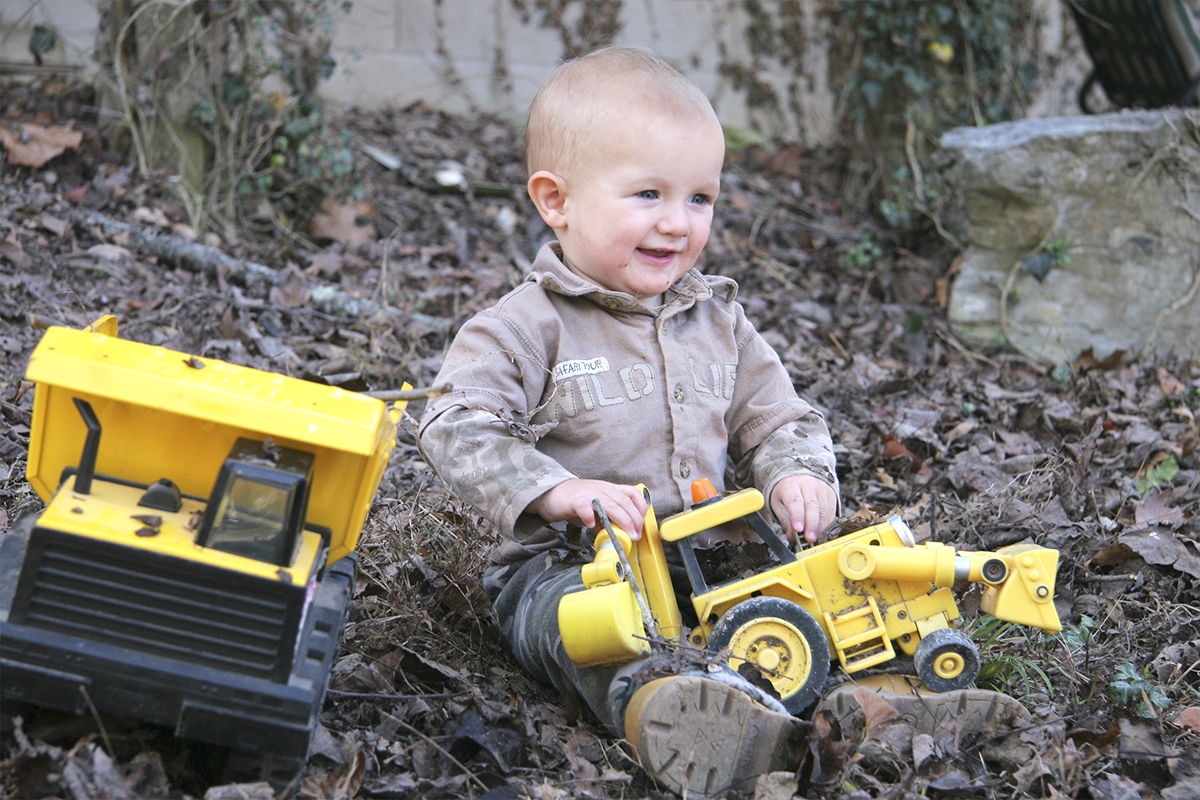 A father has no greater joy than to have his son look up at him with a smile and say, “Da-da.” Every day when Justin gets home from work, our son Parker, who will soon be one year old, is at the door waiting for him. He is so thrilled with Daddy’s arrival that every part of his body is shaking with excitement.

Parker claps his tiny hands and tries to jump up and down—but usually lands on his rear. He thinks Daddy is the best thing in the world. Parker is already well on his way to being a little man. He loves being outside working with Daddy, eating dirt, and testing anything he can get his hands on.

One Sunday afternoon we went to cut firewood. My girls wanted to set up a house right there in the middle of the woods. They had their blankets, food, sticks, flowers, and baby dolls. They were happy as can be playing house. Now, Parker, who loves getting in their way most of the time, wanted nothing to do with them. Parker saw his daddy with a saw and his Big Papa carrying firewood, and all he wanted was to be under their feet. I have to say, I was not much help. I had to spend my time keeping my little man out of harm’s way. I could see he was studying us as we picked up wood and stacked it in the truck. He wanted a piece of the action. He chose the biggest log, put his little arms around it, and started grunting in his attempt to pick it up. Just like a man, he went for the biggest log he could find. My girls would have gone for the smallest, just as I would have, to conserve my strength and my back until the job was done. Later, as Justin split the logs I stacked, Parker again had to be a part, so I started handing him pieces of bark. He thought it was great helping Daddy. At night, while Daddy is bringing wood into the house, Parker is always there, holding the door open for him. He claps his hands in glee, knowing he is helping Daddy.

Gracie is my helper. From the time she could sit up, she was with me working. Yes, it did slow me down, but now she is a great help. It was easy knowing what to teach my girls. I want them to be ladies as well as hard-working moms someday. So I just had them work with me. But with Parker, Daddy is not always around; Daddy has a job. When he is home, Parker is his running buddy, but, as a mother, I am still with him at this early age. If I want Parker to be a little man, then I need to start right now training him in the unique art of manly activity, not wait until he is two or three. If I postpone his training, he could become a whiny, lazy four-year-old, so that when I say, “Go outside with Daddy; be a man,” he would rather hang around and do girly things. Perish the thought! What can I do right now to encourage him to be the man I know he will someday love to be?

When my girls were tiny tots, I had them sweeping with small brooms and sitting in the sink beside me, splashing away as if they were helping me. They were being trained to work and feel useful to the family. Yes, there are boy-type toys for Parker to play with and bugs to chase—all good boy things—but I want to start now training him to be a hard-working man. Just like I trained my girls to be hard-working ladies, I want to offer him activities that I know he would naturally prefer. So I came up with some ideas that I, as a mom, can start right now.

We have lots of walnuts all over the ground outside that need to be picked up; it would be so easy to give Gracie and Laila that chore. Instead, out we go with Parker. I talk to him about how glad Daddy will be as I help him fill his bucket to the top. Then, when Daddy gets home, we make a show of giving him the bucket of walnuts. The girls help in discussing the full bucket and how hard-working Parker is. The praise is heard over and over coming from every member of the family, “Parker is such a big boy!” Then the next day we gather a box full of sticks to burn in the fire. As we work I tell him, “We are helping Daddy today, Parker; you are such a big boy.” There are all kinds of things we moms can do to raise a man. We just have to be willing to stop cleaning house long enough and be willing to get dirty doing “man” things with our little guys.

As a side note, I have come to appreciate the old proverb, “The difference between men and boys is the size of their toys.” Our little boys spend their time playing with toy trucks and tractors, so it just makes sense that they keep playing with them when they grow up. Meanwhile, we girls play with baby dolls and make a house, and then we grow up and put our childhood play to use.

Parker is eight now and I am so thankful each and every day that I “stopped” to invest those training moments in his young life. He is diligent in all things. We never have to think about keeping the house warm or the firewood stacked. He keeps a large stack by our fire, ready to go. He has his little brothers alongside him helping and teaching them. As I kissed him good night, I told him. “Parker you are going to be the best daddy some day. I am so proud of you.” Not a day goes by that we don’t encourage him and pour words of affirmation over him and his three little brothers.

WORDS Are a Powerful Tool

This morning as I am writing this, the boys are hanging out with their daddy in the garage, each working on his own bike. My three-year-old son came running into my office to tell me that he was working on his bike, but that Daddy was helping him. Each boy knows he is a part of the BRAND TEAM and that he is important to the home running smoothly—and at times a little crazy! Come on, we have crazy moments every day just like everyone. We have six kids and four of them are BOYS! A family would not be a family without the crazy moments. But if you want to raise children that are a part of your TRIBE, then change your WORDING. Learn to be the encourager and the builder of young hearts. Learn to believe in your children and they will believe in themselves. That will take them a long way in life.

As I have grown older and worked with hurting people, I have seen how the words spoken to them as children have affected them in negative ways. It is not until they see these words as lies and replace them with God’s Word that they can be free of the hurt and pain. Be GOOD to your children by speaking words of life, truth, and boldness into them. Train them up to walk with you, not against you, and you will find that there is peace and love in place of hurt and lies. It all starts with “Daddy will be so proud of you!”