Filter by:
NGJ Magazine / Articles / Marriage: Sharing the Pie
Do you get our FREE Magazine? 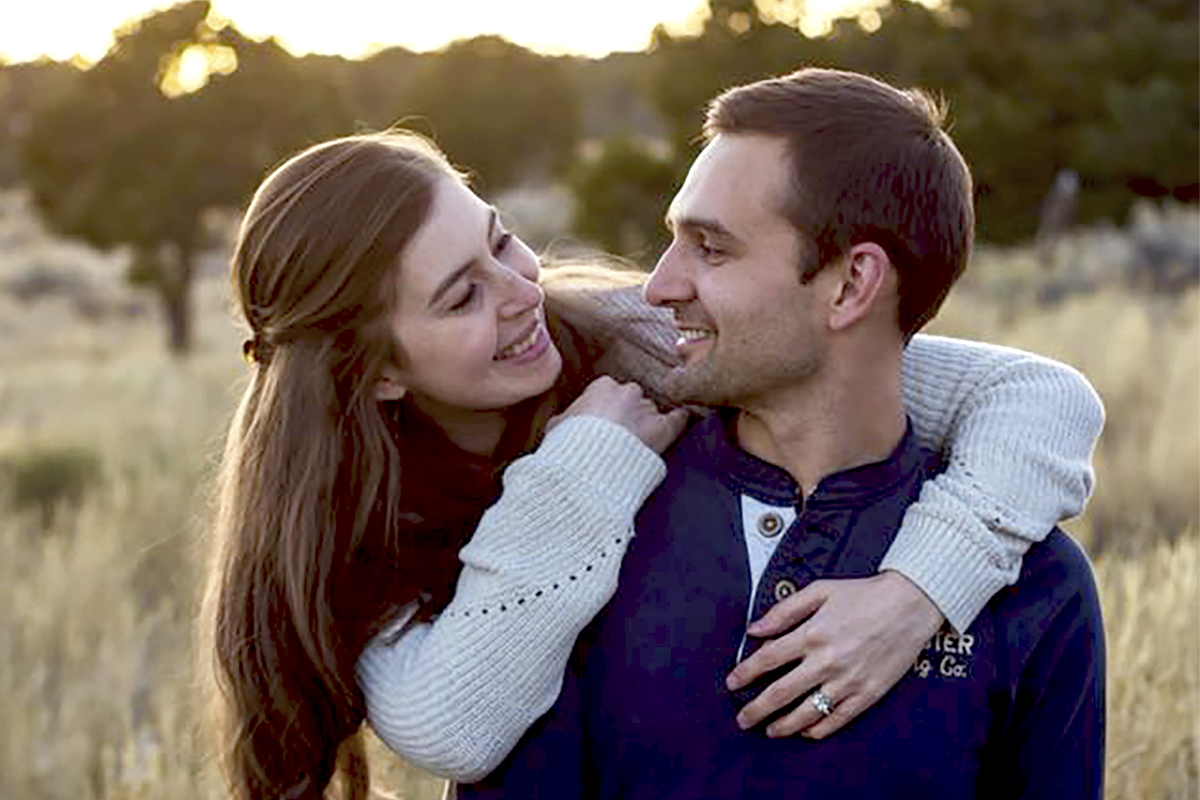 That “caught in the headlights” look is so common for a man in the early years of married life. I entered marriage thinking I could relate to a woman as I had related to my buddies for the past 25 years.

The first lesson I learned is that women are irrational and don’t make sense most of the time. It took me years before I reconciled myself to the fact that I am not capable of understanding a woman. I can never press her into the mold of my logic and my nonchalant approach to issues. There are things I just don’t care about that my wife cares about deeply. She has needs I don’t have, that don’t make sense to me.

For instance, if you are a person who never has cold feet and you sleep with a partner who does, you just don’t understand their need to put their cold feet on your thighs. It took me a lot of years before I learned to make sure my wife put socks on before she went to bed. Now, in our old age this issue has turned around . . . not the emotional thing but the cold feet. Now I have cold feet and she is always a furnace, which is handy. Turnabout is fair play, right?

You know the Bible tells us that love believes all things (1 Corinthians 13:7). This simple statement is key in both marriage and in our relationship to God. Love doesn’t keep accounts. It doesn’t keep score. When we start keeping score in a relationship, we’re in it for ourselves and it will never mature into something sweet. When we start keeping score, it’s a game—a game where we are counting winners and losers. As long as we keep score it is not in hopes that the other person will win, but in hopes that we will win.

Have you ever seen two kids trying to divide up something they both covet? When I was a kid I loved chocolate pie. There was nothing I liked better than a chocolate pie. Regretfully, my mother would usually make just one pie and it would be divided seven ways. It never did go very far, leaving me lusting after more chocolate pie.

One night when my brother and I were about eight and ten years old, Mama and Daddy went to a Bible study and left us home alone. As she walked out the door she said with a grin, “I made a chocolate pie. After you boys finish washing the dishes, you can divide the pie and eat the whole thing.” The wonder of eating half a pie was intoxicating. It was a boy’s dream come true. We washed the dishes with our eyes on that chocolate pie.

When we dried the last dish, I rushed over to divide the prize, since I was the elder one and obviously much more capable of determining where the middle of the pie was. My little brother was young, but when it came to chocolate pie he was very astute. He saw I was laying the knife a little to my advantage; after all, I was bigger so all things being equal my body needed a bigger piece of pie. But he would have none of it. “No, that’s not right. Over this way a little bit.”

I pulled the pie away, insisting, “No, you are wrong.”

But I firmly stood against him. “No, this way, this way . . .” Plop! Upside down on the floor went the chocolate pie. We both stood there looking down at that big puddle of chocolate pie on the floor, splattered everywhere. It was one of those “aha” moments in life. Or maybe you could call it an “OH NO” moment. Our opportunity for half of a pie—the first time in our life—and now it was just the dog’s dish. Come to think of it, the dog couldn’t even eat it because chocolate makes dogs sick.

I looked at him like he ruined my entire life and said, “You can have it all.”

He looked at me with the same accusing glance. “I don’t want any pie. You can have it all.”

It was my turn to yell. “You dropped it. It was your fault.”

He retorted, “It was your fault because you were cheating, trying to get a bigger portion.”

Marriage is kind of like chocolate pie. It is so good, but sometimes it ends up splattered on the floor. Each of us can easily see what our partner is not doing, or is doing that is not loving or kind. But seeing the lack in ourselves is not so easy. What couples need to understand is that the most important thing in a relationship is that our spouse be confident that we have their back, that we really want them to be happy and fulfilled. And when they do jerky things like spend too much money or have bad moods or other humanly nasty things, it is not because they want to hurt us but because they have a weak moment. Generous thinking prevents us from taking offense. We all need one person who really loves us and believes the best of us. Most people come into marriage with a pile of heavy baggage, including mistrust, selfishness, and a chip on their shoulder. The fact is, we know our own heart so we assume our mate’s heart is like our own. More than anything we want our fair share of the pie, and if we don’t feel we are getting it we accuse, mistrust, and feel misused. Faith relationships can’t be built on selfishness or accusations. Many Christian marriages are built on competition instead of benevolence.

You men should say, “Listen, I just don’t really care that much for chocolate pie. You can have the whole thing. I want to see you get to eat the whole pie.” She could respond with, “I’ll tell you what, Let’s just eat one piece, and then we will think about eating another one, okay? Here, have a bite.” “No, you take a bite.”

Often, maybe even usually, one spouse has to be willing to give up a lot of pie before the other comes to see real love and begins to have faith. But that’s the way a sweet marriage is built; it is the way trust is formed. Marriage is love. Love is giving all, not equally dividing.

It’s a matter of seeking the good of the other person. When we come to a place where we really love our spouse and want what’s best for them, then we can begin to build what I like to call a sweet faith relationship. Having someone who has total confidence in your love and forgiveness is precious, maybe the most precious thing in this world.

FAITH Relationship between God and Man

There may be only one person in this life that I have that kind of relationship with, and that’s my wife. Maybe 95% with my kids; and with my best friends it’s 50%. Because when you’ve lived as long as I have, you’ve had friends betray you. You’ve had friends doubt you. If I ever have a friend that doubts me or doubts my intentions, they’re just not my friend anymore. I can’t make them be my friend. I can forgive them, but I can never trust them again with anything vital. I can be acquaintances, but I can’t be a close friend.

God wants you to trust him. He wants you to be a kindred spirit with whom he can share everything, someone he can trust with his heart and his reputation. In a good faith relationship there is no reserve, no doubt, no suspicion or criticism—just good will and complete openness. Maybe that is one of the reasons God uses the marriage relationship to illustrate his relationship to the church.

I know my wife gives me the benefit of the doubt. I know she expects me to have the best of intentions toward her. She wants to believe I care for her above and beyond all. And I know that if it appears otherwise, she’s not going to believe her eyes first, she’s going to imagine a scenario that assumes the best. She believes me. She chooses to have faith in me. Now, do you have anyone in your life like that? If you do, that’s a precious thing to have; just one person in your life. If you have two or three, you’re a rich man to have people like that who believe in you. Henry Adams said, “One friend in a lifetime is much, two are many, three are hardly possible. Friendship needs a certain parallelism of life, a community of thought, a rivalry of aim.”

God exalted Abraham by calling him a friend. “And the scripture was fulfilled which saith, Abraham believed God, and it was imputed unto him for righteousness: and he was called the Friend of God” (James 2:23). Most marriages never arrive at the high level of friendship because they never care enough to give, to serve, to love unconditionally. If life has one single goal, I would say it is to have a faith relationship with God and at least one person.

God wants us to trust that he loves us above and beyond all things. And when bad things happen, like they did in the life of Job, we will give God the benefit of the doubt, believing “that all things work together for good to them that love God, to them who are the called according to his purpose” (Romans 8:28).

We don’t get bitter at life’s circumstance, depressed, or lose confidence in his loving care because we can trust that HE loves us and seeks our best. He is our closest friend.

God created us for the express purpose of becoming family (Ephesians 1). He desires communion, a relationship of oneness. Jesus prayed that “they may be one, even as we are one” (John 17:22). So this oneness is what Jesus came to establish. It is not just to cause us to stop sinning. So much of religion is focused on just trying to keep the law, or do good things, or keep the Sabbath, tithe, go to church, confess your sins, or read your Bible. That’s pitiful religion. It is all shallow compared to cultivating a faith relationship with the Heavenly Father. What God is looking for is a relationship of faith. He wants you to come to a place like Job did when he heard that all his earthly treasures were stolen or destroyed leaving him suddenly with nothing, and yes, even when his entire family was killed: he fell on his face and worshipped God. Job knew God loved and cared for him. That faith relationship he shared with God was the most precious thing in his life—above his wealth, health, wife, and children. Job knew he had a friend in God, that God had good will toward him, and that he had a purpose even when it was not apparent and seemed to contradict the circumstances. That is what a faith relationship looks like. Expect the best from God. Expect the best from your spouse. Be the best friend to God and everyone else, and you will be a rich person indeed. n

7 comments on “Marriage: Sharing the Pie”