Filter by:
NGJ Magazine / Articles / Married to a Visionary
Do you get our FREE Magazine? 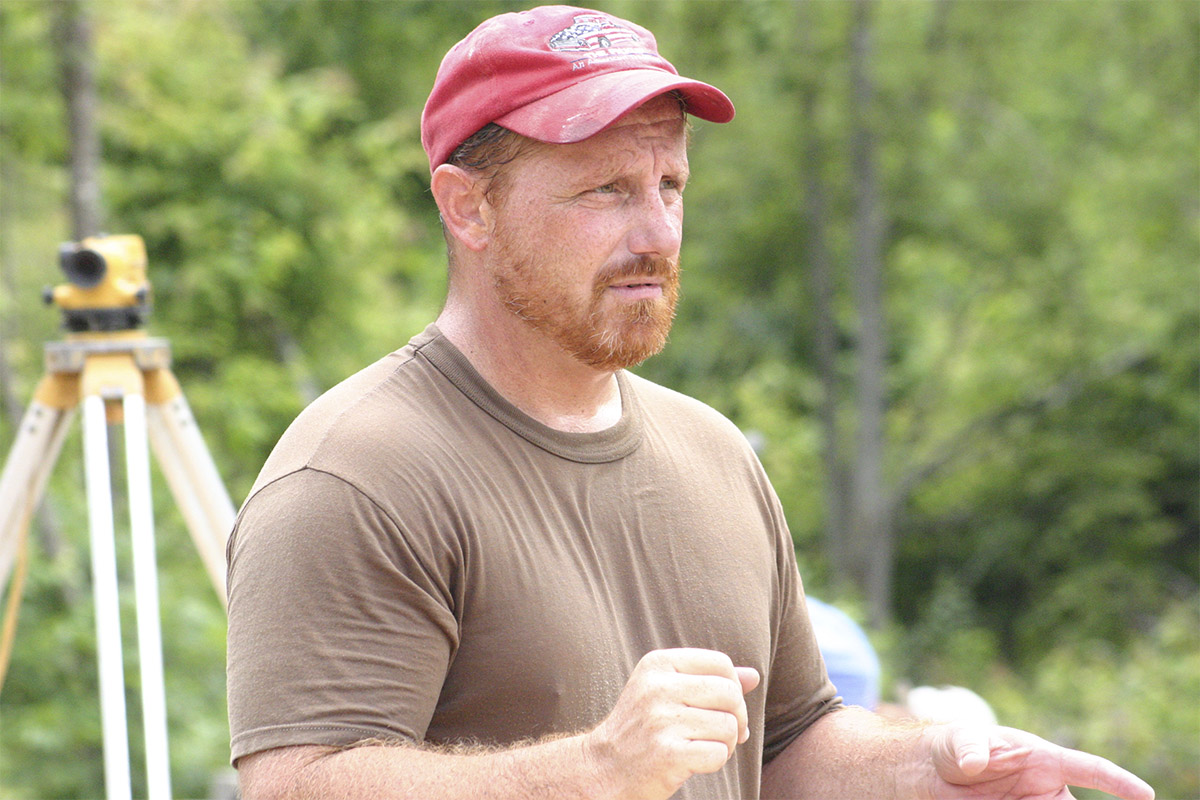 When I was a young girl, most of the examples of good marriages in my life—my parents, my grandparents, a close aunt and uncle—were of women married to Steady men. So naturally, that’s how I envisioned my own would be. But back then we didn’t understand the three types of men, so I didn’t know what I was getting when I got a classic Visionary.

Ben and I met at a Wednesday night prayer meeting in a family’s basement. These meetings were pretty informal, with some singing and then the opportunity for anyone to share a word, followed by prayer. Not being afflicted with bashfulness, as soon as the singing was over, Ben jumped up, planted one foot on the coffee table and his (huge) Bible on his knee, and began a passionate message about being a peculiar people. I could see it came naturally to him, but having never heard a young man preach with such authority, I was fascinated.

When the meeting ended, I introduced myself to Ben and he impressed me by forgetting his name (true story). He opened the front of his Bible and found it there.

After a moment of awkwardness (during which I now know he was desperately trying to figure out how to talk to a girl), he said, “Let me tell you what God showed me today,” and flipped his Bible open. I listened with wide eyes, not knowing what to think of this guy, but still captivated by one who taught the Scriptures with authority. (I realize I keep saying that, but I come from the Northeast, where there was very little Bible influence in the 1970s and ‘80s. The Christian guys my age were for the most part pretty wishy-washy.) At some point, we agreed to go to a local diner so he could continue sharing what God had taught him.

We spent a few hours at the diner that night, him teaching and me learning everything you ever wanted to know about Romans 6. I was riveted. Spellbound. I knew right away there was something very different about this guy, and weird as I thought he was, I was drawn to him—not in a romantic way, but in an “I need more of this authority business” way. At 21, he was a man—he was in the Navy, had a plan for his life, and was busy serving God—a Christian novelty where I come from.

After I graduated from college and his tour in the Navy was up, we married and began our life in Asheville, North Carolina. When our first move happened just three months later, I should have known I was in for a wild ride. In the first 30 years of our marriage, we had five children and homeschooled them, spent almost 19 years in the Navy and 11 years in defense contracting, and moved no fewer than 17 times.

In addition to Ben’s regular jobs over the years, we completely gutted and remodeled houses, painted interiors and exteriors, cut trees off of people’s barns after hurricanes, put new motors in four vehicles and fixed many others, converted a bomb shelter into a house, started two grass-cutting businesses, and did some roofing. At any given time we owned between five and seven vehicles, all of which needed repair. We once tore the back off of our house (during a thunderstorm because VISIONARY) and completely reconfigured it. When major holidays came around, we always wondered what big project we would be doing—tearing out all the carpet on Christmas Day, rebuilding the deck the same day 60 people from our Sunday school class were coming for a barbecue…

My children—both boys and girls—know demolition, plumbing, wiring, framing, roofing, painting, tiling, and auto repair. They can install windows and replace a hot water heater. All of them can split firewood with a maul, and one of my daughters recently fixed a truck that wouldn’t start while her guy friends stood by and watched. This crazy kind of life has its benefits, namely that my kids are prepared for just about anything.

Over the years our life was rich in experiences that included tent camping (it rained literally every time we went, with such predictability that a friend once offered us $20 to go home), planting a grove of pine trees (for what?), steelhead fishing in Washington State, a short-lived family bluegrass band, living in a trailer 15 yards from railroad tracks and just at the end of a runway where C-5 cargo planes took off all night, six dogs, a few fish, and a three-legged turtle, a trip to Disney World complete with head lice, and a sailboat that never saw water. Every year we grew a garden eight times too big for our family, then spent the rest of the summer hauling laundry baskets full of fresh vegetables to church to give away. Everything we ever did was bigger and more “exciting” than necessary. It was exhausting.
Then the day came when the last child graduated from college and Ben and I were empty nesters. Finally it was time to relax. We had run the race, finished our course. I breathed a sigh of relief and thought I was on easy street.

Ben had a plan.

One thing you need to know about Visionaries is that they never run out of ideas. This one was a whopper, and I had no more children to help me. Ben decided we were going to move back to Asheville, buy a farm, and raise cattle. We would use the “profits” to support missionaries.

Let me remind you that our experience with animals was limited to six dogs (four of whom died untimely deaths), a few fish, and a crippled turtle. We knew nothing about large mammals, especially those that would be a food source. I was petrified.

But after 30-some years of marriage, you learn there are things you can say to your spouse. So I put my hands on my hips and said in the sternest voice I could muster, “If you want to farm, I can’t stop you, but you’re crazy! We don’t know anything about cows! I am not taking care of them, and I am never going in the pasture with thousand-pound animals.”

Ben replied, “What’s to know? You put them in the field and they eat grass. How hard can it be?”

(Let me just stop here and give you this warning: if your husband ever asks that rhetorical question, you need to become a prayer warrior of the highest degree. Cover yourself, your husband, your home, your pastures, and your cows with fervent prayer, because that is the question of the unlearned and ignorant, and the universe is laughing with glee at all the fun it’s about to have at your expense.)

So Ben is a farmer. When I said “I do” 34 years ago, I became a farmer too, I just didn’t know it yet. Our first two years as cow parents have been chock-full of lessons.
Ben has learned that when you bring calves home, you don’t just put them out to pasture. If you do, they escape in less than 18 hours and go crashing through fences, winding up at the neighbor’s farm a mile up the road, and then you have to sell them at the stockyard because once they escape, they will keep trying. He’s also learned that a 300-pound calf can throw you around like a dishrag.

I have learned that Angus cows are big teddy bears. They are calm, sweet animals that just want to be scratched and loved on. I hang out with them as often as I can, and we call it “cow therapy.” I have also learned to never say never. Every time I’ve said “I will never (fill in the blank),” I end up doing it. When Ben brought a milk cow home last fall, I said, “I’m not milking a cow,” and while the words were coming out of my mouth, I knew it would eventually happen.

Together we’ve learned that it’s possible for two middle-aged adults to build a barn in a week and still love each other. I am eternally grateful to our two sons who are rich in mercy and came one weekend to put the roof on so I wouldn’t have to.

Why do I share our story? Because somewhere out there are thousands of wives married to Visionaries who feel like they can’t take all the craziness. Sometimes I still feel like that, and I’m 34 years into this.

Several years ago I asked a wiser, older woman why I still struggled—with how I reacted, my attitudes, my thoughts… I figured after all these years, acting the right way would come naturally. I was surprised at her answer: Keep struggling. It’s when you give up that everyone loses.

God knows you are married to a Visionary and that sometimes you feel like you’re losing your mind with it. But he says in Isaiah 65:24 “And it shall come to pass, that before they call, I will answer; and while they are yet speaking, I will hear.” His provision for you is not just on time, it’s EARLY—“before they call.” You have what you need right now to honor your husband, no matter how crazy you think he is.

Your secret weapon is your flexibility, your ability to adapt and go with the flow. Practice it daily!

“Commit thy works unto the LORD, and thy thoughts shall be established” (Proverbs 16:3).

Even when you don’t feel like it, do the right thing, and eventually your want-to will catch up. God will be honored, you will be blessed, and your husband will know what a treasure he has.

10 comments on “Married to a Visionary”