Filter by:
NGJ Magazine / Articles / Movers or Shakers?
Do you get our FREE Magazine? 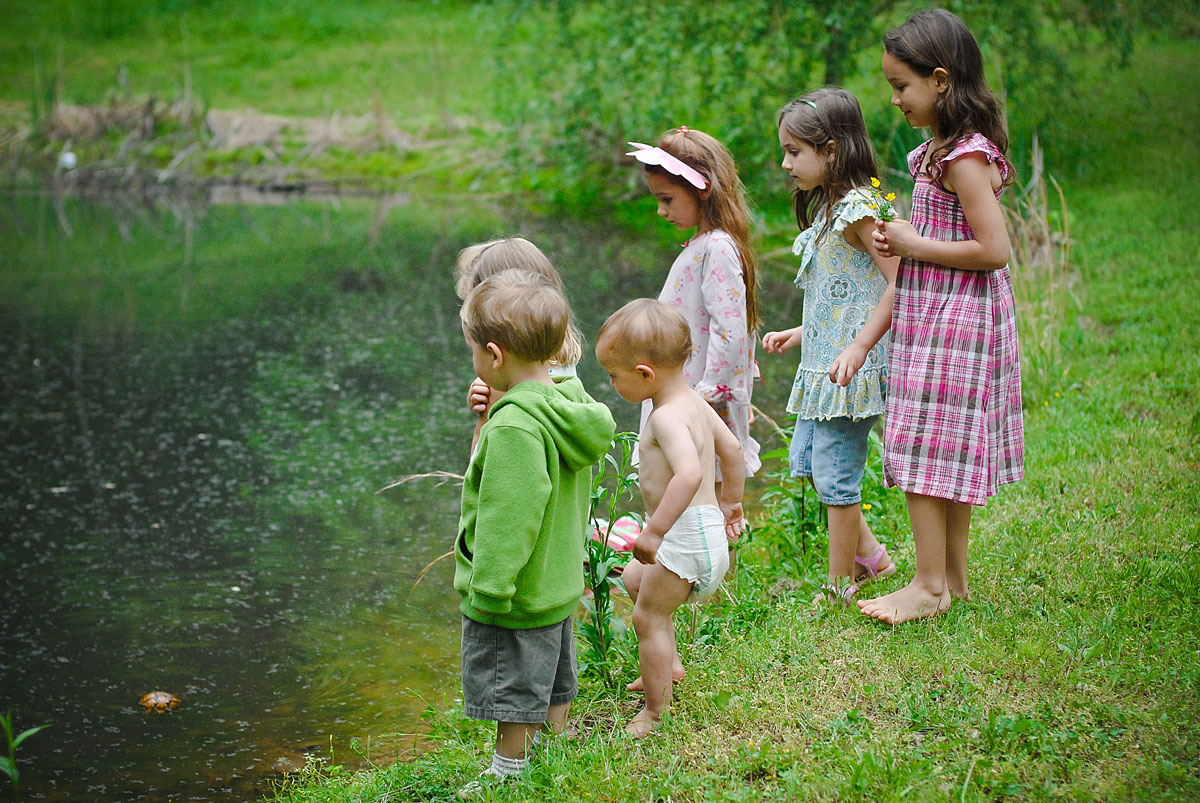 Many need a community, a church, a sanctuary, a new start, a place to save their marriage or their children. American Christians are in the midst of a cultural shift. We see it everywhere, the letters we receive, those we meet when we are doing seminars, periodicals, magazines, and books. It is a movement that has by no means peaked. Before it is over, most Christians will have gone the way of corruption. But a minority, which will still number in the hundreds of thousands, will get out of the destructive vortex. It reminds me of the westward movement in wagon trains. Everything is left behind and all is risked for the sake of a fresh start, a new world.

Without any help from us, several families have looked us up and moved into our community. Out of the sixteen families that now make up the Church, only five are indigenous. Twelve families, including our own, are transplants. We are from Memphis, Louisiana, Florida, Colorado, North Carolina, Alabama, Wisconsin, Ohio, North Dakota, some singles from Mississippi, New Mexico, Texas, and my memory fails me. We are all escapees, fleeing the world and its influences. We each brought our own unique problems and blessings.

Migrating to create Christian communities is an inevitable trend as Christians continue to scream, “Stop the world, I want to get off.” But I warn you, the romance eventually goes out of everything except a good marriage. We recently lost two families. They found that their needs were not being met. We failed to live up to their expectations. I think some others are disappointed. The magic never happened. Eventually, they will move on, again looking for someplace where they are not. Have you heard about the man who, out of a desire to escape his past, added a new room to his house so he could have a sanctuary not contaminated with the past? To keep it from being corrupted, he allowed no outside influence, no magazines or electronic media, and no visitors. On the day of its completion he hurriedly closed himself in, whereupon he found himself in a museum of his own life. He soon discovered it to be generally of a lower quality than the world he had shut out. How far do you have to travel to become someone else? What State is the state of contentment? Where is that community with people not made of flesh? Where can you find a group of young people who never grow up to question everything? New homes don’t make new families.

Many communities such as ours have sprung up all over the country—back to basics folks. Some have goats, chickens, cows; a few try plowing with horses. Not far from us is a community of 150, all living on one farm in two houses. They are seeking to recover something they feel is lost. I am sure it will get stepped on before they find it. My wife recently talked with a leader of a church/community movement, and he told her that they are turning people away. He said, “I send them places where I don’t agree with all the doctrine; we just cannot contain them.” This past week a man told me how he tried to join another community in Ohio, but they sent him away. “We have enough already,” he was told. Weekly, families drift through who are looking for the “recovered church.” I tell them, “You won’t find it here; we are the Church of Laodicean—lukewarm.” The entire spectrum runs from those hoping to survive the Great Tribulation to those hoping to survive the greater tribulation of marital relationships. If they are saved they will never see the Great Tribulation. If they are married they must learn to endure unto the end. For those who are hoping that a community of believers will deliver them, the rapture is their only hope on both accounts.

By phone, by letter, when we go out speaking, many times I hear, “We are looking for families of like mind; where we live we are not understood.” In most cases they have a valid concern. They are correct in their rejection of the culture they live in. But, is the answer found in building a retreat with others of like mind? Obviously we feel it is a valid option, for we as a family have somewhat taken that course.

I have gone to large churches in major cities and met small fellowships, communities even, of believers who have taken steps to isolate themselves and sanctify their environment. They have picked their friends carefully. They homeschool, teach their children the Biblical approach to marriage, and have family worship. They are a church inside of a church. They usually view the larger church, with its age segregation and youth activities, as a threat to their sanctification. Many are turning to house churches. The cream is leaving structured Christianity and starting over again.

But I am seeing a general failure of the Christian community to achieve the hoped for goals. How many families must one search through to find ten who would be ideal examples to your children? I don’t mean selecting them from a magazine cover or from a stage at a family-life convention. If, from a hundred thousand families, ten such were carefully selected, would they also select you? Would you be content to live in a community of families just like your own, where all the women respond to their husbands just as you do, where all men have the same patience and discipline as you, where all the children are just as creative and spiritually minded as your own?

The families who have moved here all have unrealized needs they hope the church will supply. When a family leaves their church looking for a better one, I often wonder how much the church they left behind is going to miss their ministry. When you get any fifteen families together with the accompanying sixty-five kids, you have a whole spectrum of problems. What is the church? Is it an exclusive club of selected families for support purposes, or is it all of those whom Christ has added to His body? Who decides who is in the church, men or God? If the ideal club existed, who would want to join it—those who had no needs and much to offer, or those who are desperate and hoping to stop their dangerous slide? Would you turn away the desperate, or would you flee from them and regroup in a purged and selected group? How long will it last? Will you appoint a committee to screen new applicants? How long will it be before you feel the need to flee from them, or they from you? I am not suggesting that you stay where your family is suffering at the hands of the world, but have you considered doing something about it, starting in your own home?

The Church is in retreat. It is backing up, withdrawing its troops and hoping to salvage that which remains, but its small reserves are dwindling. The love of many is waxing cold. Blame and accusations are thrown around everywhere. Everything is too big, too fast, too impersonal. Where did America go? The big impersonal cities have eaten the communities. Any magazine with a peaceful, idyllic scene is an instant hit. People pay a high price for dreams. For many, the only sanity left is in their imaginations. The “tie that binds” is no longer family; it is unwelcomed economic responsibilities and worldly associations.

There needs to be a change, but there are so many weak and wounded Christians with the bless-me mentality. They are looking for a church, or a man, or a community to minister to their needs. Looking to the church for your family’s spiritual health is like watching organized sports to get your exercise. No church or community can reclaim your family, restore your marriage, or assure your children of godliness. The father is the spiritual head, not the single source, but the leading member in religious instruction and example. Life begins in the home, not the church. You can’t move into holiness, or join holiness, or associate yourself with holiness. If holiness is not in your soul in the worst of circumstances, it will surely fade when times are ideal. The hardest place to be an overcomer is where there is little to overcome except that which is within.

In conclusion, if your family is going downhill, and you’ve not been able to turn it around, I can understand your desperation. Many families have found it a great help to move away from the fast pace, to get out of debt, to turn back to a simpler way of life, to devote more time to family, worship, and ministry. Others have tried to make such a move and found that they took all their problems into their new life style. God changes men’s hearts, not their houses. He starts on the inside, where we start on the outside. While we are blaming the influence of others, God is waiting on us to bear the right influence to others. The power of the gospel is not limited. If you are not experiencing the gift of new life where you are, moving won’t help.

It is the take-charge attitude that will make a difference. Don’t run from your neighbors. You may need to disentwine your families, but then change them with the power of the gospel. Don’t spend all your time teaching your children how to dodge the world. Teach them how to change it with the love of God and a King James Bible. In these last days before the close of this age, we don’t need to retreat in order to survive, but rather advance in order to save. We are in the flesh, but we do not war after the flesh. We are in the world, but not of it. God took us out of the world so He could send us back into it with a message and an example. If, in fear of the world, you spend your time criticizing it, you are as much a victim as those who love it. Stop being merely a complainer and become more than a conqueror through him that loved us. As long as you are in this body of flesh, you will never be able to move away from the world, so turn around and shake it with the gospel. Whether you are a mover or not, at least be a shaker.

A Bachelor's Discovery (It's About Time!)

5 comments on “Movers or Shakers?”