Filter by:
NGJ Magazine / Articles / No More Bondage to FEAR
Do you get our FREE Magazine? 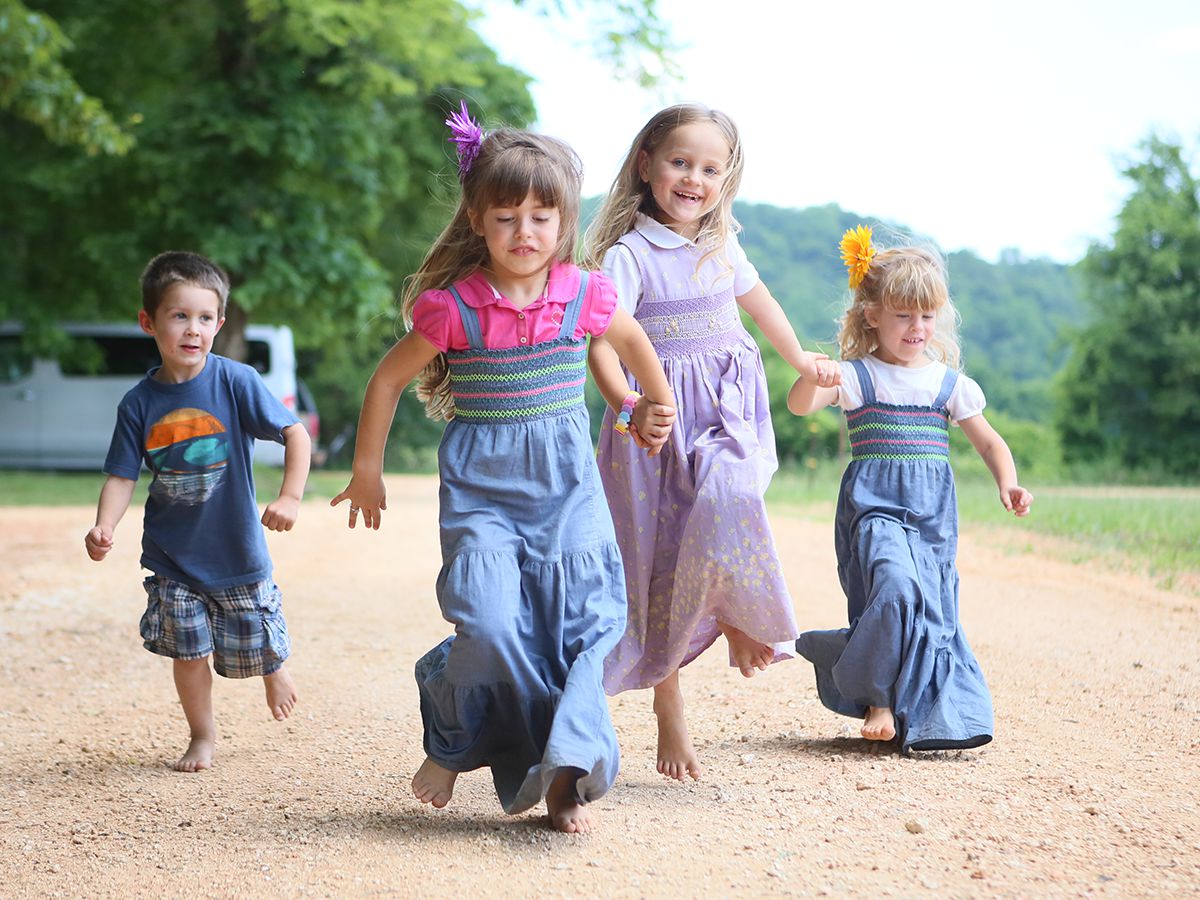 Shoshanna was shepherding two small children the other day and noticed that when the little fellow, nearly three years old, asked for something, he reverted to baby talk with a whine. His parents often ignore his requests until he resorts to pitiful baby talk, at which time they are provoked to respond. So, when he is making a request, he has learned to bypass the preliminaries and get down to language that moves people to pay attention to him—baby talk.

When he came to Shoshanna with a request for water, his body language changed. He slumped and swayed as if in a near fainting condition; his head rolled and hung to the side. He pulled on her dress, and when he spoke, his speech was slurred and babyish. He said, “I una dink a wotta.” She asked, “What did you say?” He repeated, “I una dink a wotta.” With no emotion, and a slight note of rejection in her voice, Shoshanna said, “I am sorry; I cannot understand you when you talk like that. You will have to speak plainly.” She sounded as if she was giving him one last chance to make an intelligent request before she turned to more important matters. He straightened up a little and tried to speak more plainly. When she saw that he was making a sincere attempt to act his age, she took that for compliance and helped him by asking, “Are you saying you want a drink of water?” Her accent was decidedly English, overly articulated. He watched her mouth stretch into the different shapes as she carefully pronounced the words, and he understood what she wanted him to do. He tried it and was much clearer in his speech. All the slump and drag went out of his body language as he tried to imitate her dignity. Without further ado, she turned to give him his drink of water.

This is a good opportunity to point out something that is easy to miss but so very important. Note that when the little fellow made a sincere effort to change his tone and conform to her leading, Shoshanna immediately gave him his request. She did not take that opportunity of compliance to lecture him on the importance of speaking correctly. He had taken responsibility to yield to her leading, to rise above slovenly habits. If she had rewarded his correct response with a reproving face and brief lecture about speaking correctly, all her efforts would have been in vain, for a three-year-old child has a very short attention span—about three or four seconds. He cannot see the relationship between two events that are separated by thirty seconds, but when two things happen together, the child relates them to each other. It only takes one touch on a hot surface for a child to make the correlation and not touch it again, but if the pain had a thirty-second delay, the child would never make the connection. He would keep touching it and keep getting burned.

If Shoshanna had delayed giving him the water and returned his compliance with a frown and a lecture, the closest thing to his proper speech would have been her negative reaction, so he would have associated her negative response with his actions and concluded that she did not want him to speak plainly. After all, he spoke like an adult and she immediately frowned and punished him with a lecture that lasted fifteen seconds. His shoulders would have slumped and he would have returned to his immature mental state with the baby talk. Instead of making an association between grown-up talk and getting water, he would have made an association between his baby mentality and getting the water. Next time he wanted water, he would affect his pitiful, broken demeanor and speak like he did when he was two years old, and everyone rushed to serve him.

Don’t buy the line that brokenness or weakness is inherited personality. It is all in the kind of example you lay down and how you respond to them. Remember the rule, “Affirm all positive behavior and make all negative behavior unrewarding.”

In our travels we meet many families. I was visiting in a home where a little boy about thirty months old was playing. I looked at him and made a friendly gesture. He jumped up and ran to bury his face into his mother’s skirts. She petted him and very lovingly said, “You are shy, aren’t you.” He squirmed deeper into her understanding embrace, eyeing me accusingly. This little fellow has a sister about four years old, who is also very “shy.” Her parents explain her emotional spells, patting her on the head and saying, “She is a very emotional child.”

She was playing on the floor with another small child. When it came time to go, they were told to put the toys back in the box. Her smaller companion began to clean up, but this little girl responded to the command by looking pitiful and fretful. Eventually she retreated into quiet fretfulness, not picking up the toys. All eyes turned on her parents to see what would happen. True to form, her mother and father joined together to explain their child’s behavior, “She is a very emotional child; she gets upset easily.” And that was it. They have no idea that their sweet little girl is going to hate them when she is fourteen. She will be angry and resentful. They will sigh and say, “I will be glad when she gets married; she is a bad influence on the other children.”

Now learn another lesson. When you label a child’s unpleasant behavior with a name like shy, emotional, or fearful, you legitimize it. Every time you explain that child’s behavior with a defining word, you confirm him as broken, and in so doing, relieve him of the responsibility to act differently. I could take a perfectly stable child and make him shy or fearful within a week. I would watch for the smallest sign of fear or shyness, and respond by placing a loving hand on the child’s shoulder, smiling my most understanding and healing smile, and sympathetically explain his behavior as fear or shyness. The child would cuddle up to me for comfort and I would offer assuring words of concern. After three such experiences the child would get the message loud and clear, “I am a fearful child; I need love and understanding; let me go find something that makes me afraid.”

The child would come to recognize the power this “method of behavior” afforded him, and he would begin to use it as a means to avoid unpleasant situations and to dominate others. When he didn’t want to pick up toys, he would be confused and fearful. When someone invaded his space and competed for his mother’s attention, he would reject them with symptoms of shyness.

Just as you could do reverse training on a child, causing him to manifest any symptom of weakness, conversely, you can make a weak child strong within the week. Parents get into ruts that perpetuate negative behavior in their children. The rule is, “Make all negative behavior unpleasant and make all positive behavior profitable.”

Parents excuse behavior by calling it personality. Personality is a starting point, not a boundary.

Now there are some children that are truly afraid. We are not talking about those who are absolutely terrified of danger, whether real or imagined. That is another matter and is very rare. We are talking about the social response of fear or shyness that causes the child to retreat to his mother’s security. Without lecturing or spanking the child, you can end this negative behavior.

When Johnny shows shyness or social fear, attempting to withdraw into your embrace, never hold him or reassure him. When he gets behind you, push him away and say something remote and indifferent like, “Don’t get behind me, go play.” Express mild disapproval in your facial features and the tone of your voice. Never protect the child who wants to emotionally nurse. Never affirm his feelings by assisting him in his expressions. Indicate the kind of response you want, and brag on the child’s strength and boldness. As you shove him back into the public, briefly state that he is “a big boy now, and big boys don’t act like that.”

Strength never comes by showing understanding for the weakness. Fear is not overcome by dealing with the fear; it is overcome by DOING the fearful thing. You overcome fear by facing the tiger with your fear and discovering that you can walk away alive. In time you laugh at the tiger, for it was only paper. But if your child flees from the tiger, and you call it fear and then offer sympathy or protection, you legitimize the child’s fear and the paper tiger gets bigger and more threatening every day. If you treat the paper tiger with indifference, the child will feel the same. Wild animals learn what to be afraid of and what to tolerate by watching their parents. What do you want, a pitiful, weak child, cowering for comfort, or a tiger tamer? You will make the child into the image of your own responses.

How to Make Love Potions

2 comments on “No More Bondage to FEAR”