Filter by:
NGJ Magazine / Articles / Now Debi Has Something in Common with an Egg
Do you get our FREE Magazine?

Now Debi Has Something in Common with an Egg 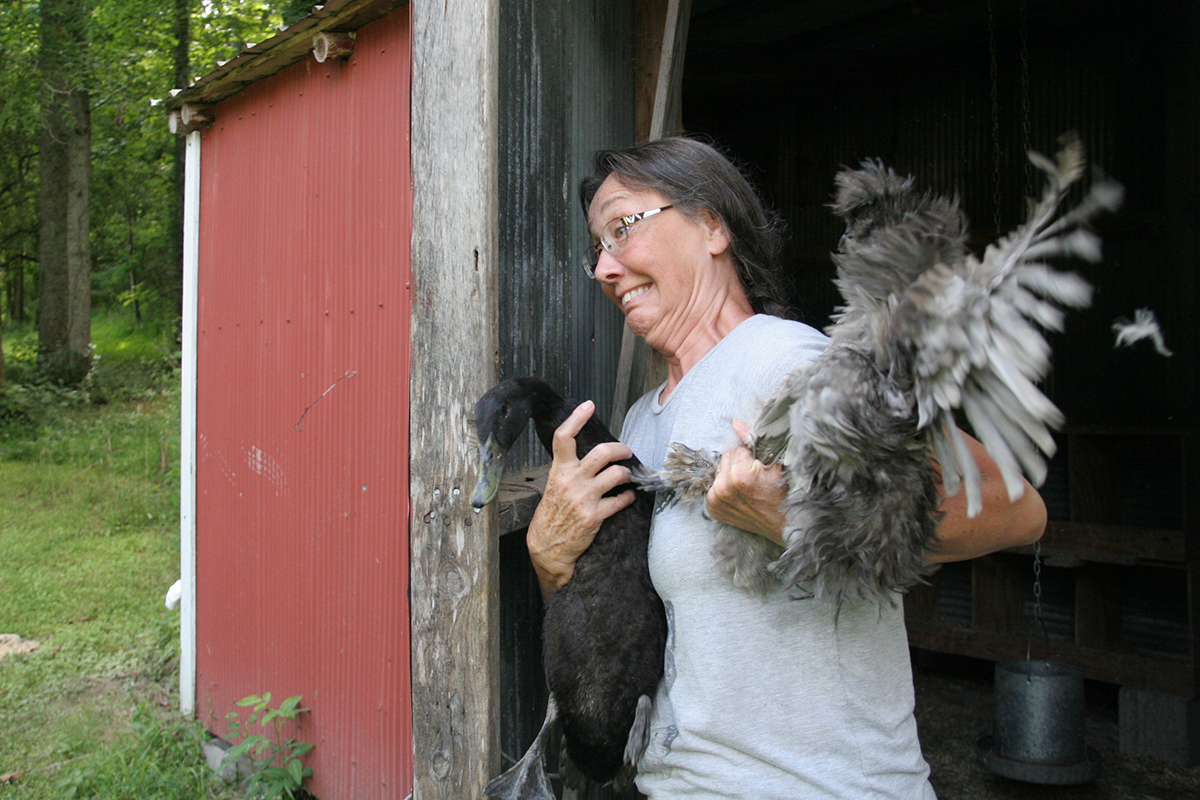 A long life will provide you with a great variety of experiences. This one was not on Deb’s bucket list. She never imagined it and now assures me she will never let this happen to her again. Once was more than enough.

What I am about to tell you is true, unembellished, and without any attempt to make you feel sorry for me. It is just what happened. It is funny so feel free to laugh.

It all started several weeks before the actual event. I was sick with some strange, fever-inducing disease that left me staggering around disoriented. I was still working at the office, but my brain was way out of sync. It being summer, there were lots of garden and yard chores plus considerable extra company. And Nathan’s family was traveling so they had left their cat, 3 dogs, 5 ducks, and a variety of 50 chickens for me to feed and water.

One miserable day I was in the kitchen attempting to put together a meal for us as well as the guests who were staying with us. Mike came to help. It was then I remembered I had not fed or watered the poor fowl; it was noon and really hot weather. I left Mike cooking while I rushed down the hill to the hen house.

Now, one of Nathan’s kids’ dogs is a hopper. He spends considerable time on his back feet hopping with extreme glee. I had not noticed this as a problem until this particular day. When I swung open the big door to the hen house, I was met with a blast of hot air. There were no chickens in the house since it was too hot. I was really glad because they are so pesky friendly. Nathan’s kids raised these fowl, and the crazy chickens think they are pets. The fowl actually LIKE to be carried around and caressed. I had just bent down into the drum to scoop out the corn when that crazy hopping dog slammed the huge heavy door shut. I didn’t panic. But I did scream, yell, and beat on the metal wall, which only attracted the attention of the fowl. They all rushed through the tiny opening on the floor to welcome me to their home. I still didn’t panic, although the small, dim, hot room full of loudly squawking fowl was FOUL. I bent down and threw corn out the small hole, hoping to encourage them to go out. Some went out while the others squawked louder and pushed close in around me.

Still, I did not panic, but I was a wee bit closer to doing so. It was hot—stifling hot—loud, and I was feverish. I imagined Mike cooking and visiting. Common sense told me that he was too distracted to notice how long I was gone. I couldn’t depend on him coming to rescue me. One thing I was sure of, I had to at least get my head out of the heat as I was feeling very faint and the thought of fainting in the slick fowl poop with all those creatures piling in on me was nightmarish. Did I mention that I was, as usual, wearing a skirt? Who cares, I thought. It was so terribly hot! I dropped to my knees and arched my back so I could get my head down lower than my behind. I stuck my head through the hole into that blessed 95-degree outside air. The chickens got so excited they ran to welcome me, so I had to stick my arm out to protect my face. Now, you may wonder how long a 66-year-old woman can stay in that position. I was holding myself up with one arm while the other arm was waving off kisses from ducks. One knee was holding me while the other leg was kicking off chickens that were investigating my legs, which were, of course, still inside the hen house. I lasted about 30 long seconds before I went down on my belly, slick poop and all. Now the chickens inside the house jumped on my back, and those outside fought for rights to be closest to my head. Desperate times call for quick action. I managed to get my other arm out the small opening. Wiggling like a worm, I got my top half out but my hips were too wide to squeeze through. I have to admit, it was the giant ducks staring down at me that were the last straw. I panicked but panic is good because it unlocked a secret super-hero strength I didn’t realize that I had. It was like my brain took on a whole new dimension as I suddenly knew things I never knew. I KNEW that tiny chicken door was taller than it was wide, so I flipped over on my side because my hips needed the extra 2 inches of space. Crawling on your side is not easy, especially if you’re old, sick, and have fowl both inside the house pecking your bare legs and outside pecking your ears. The slick poop was now used to my advantage as I slid myself free and down the chicken ramp. All the chickens that had been stuck in the house due to me taking up their door rushed out while I was still on all fours but I WAS FREE.

Everyone at the table seemed frozen in time when I marched laughing into the kitchen, smelling and looking like poop. Those guests have a whole different perspective of me than most folks.

An update: I am well, thanks to a couple rounds of antibiotics.

Note: a special thanks to two of the sweet Rodrigues’ sisters, Nurie and Kaylee, who came to help me for a few weeks so that I could get caught up on my normal work around the homestead. AND, it is with gladness I report that most of Nathan’s chickens are now in his freezer. Mike and I still wake up at night laughing. He laughs the loudest.