Filter by:
NGJ Magazine / Articles / Prophets and Wannabe Prophets
Do you get our FREE Magazine? 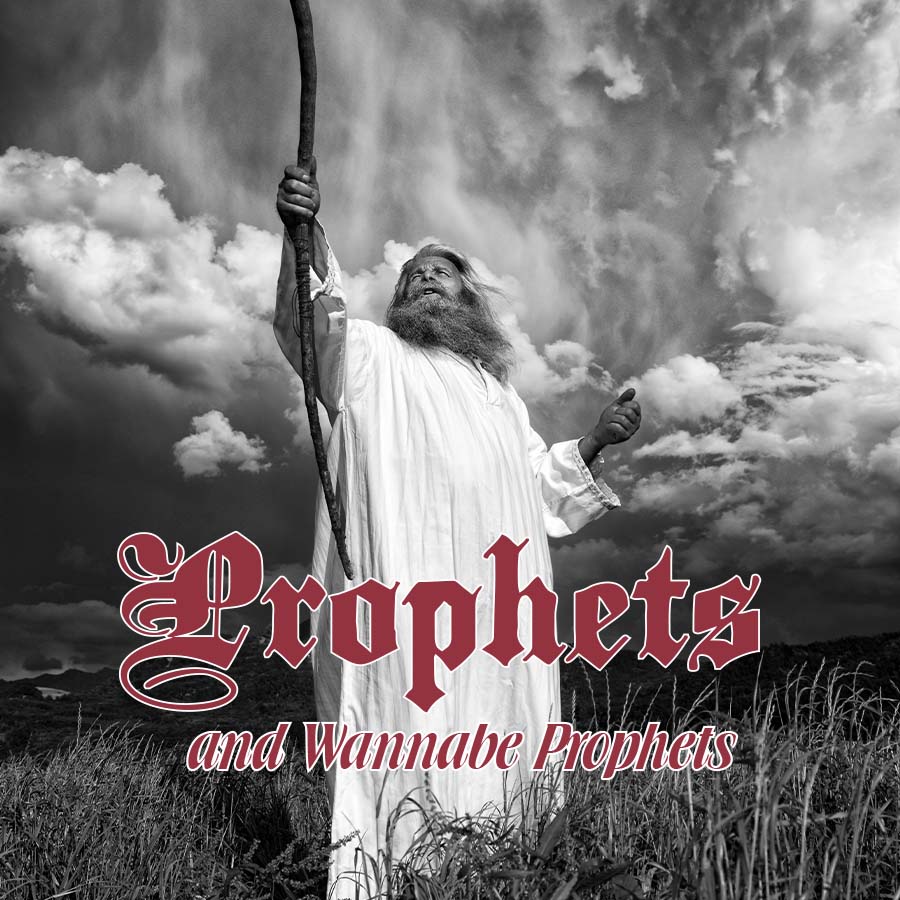 The Internet is full of “prophets” vying for clicks. Modern, so-called prophets and biblical prophets are a world apart. I don’t think any of today’s poesy prophets would stand up to prophets like Ezekiel, Daniel, and Jeremiah. Do you know about the prophet that God required to lie upon his left side in a public place for 390 days and nights, after which he was to lie upon his right side for 40 days and nights—the days representing the years God would judge Israel and Judah? That would have been extremely painful and even permanently debilitating, not to mention exposure to the elements, the mocking and ridicule of kids and adults, and the occasional splattering of animal and human urine and feces.

But that was not the worst part. God told him that when he got hungry he was to mix his barley grain with human dung that had been excreted in the sight of the public and bake it into cakes and eat so Israel could view his humiliation and degradation. Then, when he had everyone’s disgusted attention, he would announce that judgment would come upon Israel, and when the city was under siege they would be making biscuits out of human dung to eat and feed their children. Think how his wife and children must have felt seeing him lying in the road eating dung for over a year. Their father was God’s visual aid. Anyone want to volunteer to be a prophet?

Upon hearing he would be eating the dung of those who chose to relieve themselves near where he lay, Ezekiel reminded God that he had always eaten kosher and this would defile his lifelong record. So God relented and told the prophet he could substitute cow’s dung (evidently kosher—who would have guessed?). Other things were required of him, but you can read it in the fourth and fifth chapters of Ezekiel.

This seems over-the-top excessive for God to require, but he went on to tell the prophet to warn the people to repent, for during the siege when they run out of human dung to feed their children, and their kids grow weak from the famine, they will kill, cook, and eat their own children. History records just such an event (2 Kings 6:28–29).

The prophet cared for his friends and neighbors, but more than that he loved God and righteousness, so he obeyed out of a desire to save some from the coming judgment.

This horrifies the sensibilities, as it should. But that judgment did indeed come to pass as the prophet said, and other judgments followed, not the least of which was the modern Holocaust, which was far worse than the prophet’s humiliation.

Another prophet’s experience is recorded in 1 Kings 22. Bible prophets were not known for prophesying good. Jehoshaphat had just listened to many false prophets speak positive words of faith concerning all the good things God had in store for his people when they went out to war—much like “prophets” today. Jehoshaphat, being suspicious of the smooth words of the prophets, asked if there were any other prophets they might consult. “And the king of Israel said unto Jehoshaphat, There is yet one man, Micaiah the son of Imlah, by whom we may enquire of the LORD: but I hate him; for he doth not prophesy good concerning me, but evil” (1 Kings 22:8). Real prophets were never very popular. They just showed up to pronounce judgement and call the nation to repentance and then retreated to their lonely, private lair out of the public eye. Micaiah told him he would be killed in battle and that if he was not killed, then he, Micaiah, was a false prophet, which would make him worthy of death (Deuteronomy 18:20–22).

The king believed the smooth prophets full of life-giving words and positive affirmation and went to battle where he was killed just as the gloomy prophet of God had predicted. The difference between a false prophet and a prophet of God is that the false prophet is accurate sometimes, maybe most of the time, but not always, whereas the prophet of God is never, ever, without exception, wrong. Anyone can be right half of the time. I heard of a fellow who caught half of the rabbits he chased. When he got close enough to the zig-zagging rabbit he always jumped to their right.

Another experience of the prophet Ezekiel is also disturbing. Sometime after his experience of lying on his side, eating dung biscuits and pronouncing judgment, he was rejoined to his wife. In Ezekiel 24 God announced another visual aid to inform Israel of coming judgment. He said tomorrow your wife will die with a stroke from God, but as an example to Israel you will not mourn or shed any tears for her passing. Ezekiel informed the people of the prophecy, and in the evening his wife died. The prophet’s relatives and friends must have thought he was a real jerk when he did not participate in the traditional mourning activities. Ezekiel used the experience to draw a parallel to coming judgment and then retreated to his loneliness, possibly glad his wife would not be there to experience the terrible times coming upon the nation. Prophets were generally outcast by many and were often killed by the people to whom they prophesied (Matthew 23:31).

The prophet Jeremiah was known as the “weeping prophet” because of his many tears concerning sin and judgment. In Jeremiah 38 we read of the prophet warning the people that the Chaldean army surrounding the city would win the battle and everyone left in the city would die. The leftist press accused Jeremiah of being a traitor on the side of the enemy, so they cast him down into a basement that was flooded and filled with mud. The prophet sunk in the mire and remained there until he was pulled out by a sympathetic black man, after which they placed him in a prison cell. They gave Jeremiah another chance to prophecy something good, but he repeated the warning that got him cast in the mire in the first place. This time he told the king it is your feet that will sink in the mire of the Chaldeans. Of course, being a prophet of God, it happened exactly as Jeremiah predicted. Jeremiah was carried off into captivity, and there he recorded his prophecies and the outcome.

I am not suggesting that there are no prophets today. My wife Debi has dreams and impressions from God that are amazingly predictive. Some are undeniably supernatural. But she never appears in public, not even in our little church congregation, to declare her words from God. She sees her God-given knowledge as opportunity to pray. She seldom shares her words of knowledge with anyone other than me. So she has no reputation as a prophet, nor does she make any such claim. She is content to work with God to achieve his ends. I respect that and support her fully.

Her knowledge is never about the good things God has in store for his people. It is always a warning and call to prayer, just as the biblical prophets.

Beware of profiteer prophets who seek the preeminence. If a man or woman claims to be a prophet and proves to be incorrect when they say “thus saith the Lord,” dismiss them and move on. Don’t get caught up in the Internet fad of endless prophets predicting things like Trump will win the election, or Russia will invade Israel, or the United States is going to be flooded, and on and on, click after click, advertisement after advertisement. Where the Old Testament prophets tried to avoid hits, our modern prophets try to get as many as possible. I am afraid it is Christianity that is now mired in the mud. I do believe we are in the last days, when “. . . many false prophets shall rise, and shall deceive many” (Matthew 24:11). So “. . . hold that fast which thou hast, that no man take thy crown” (Revelation 3:11).

Conversation In A "Bible" Bookstore