Filter by:
NGJ Magazine / Articles / Proverbs 26:17
Do you get our FREE Magazine? 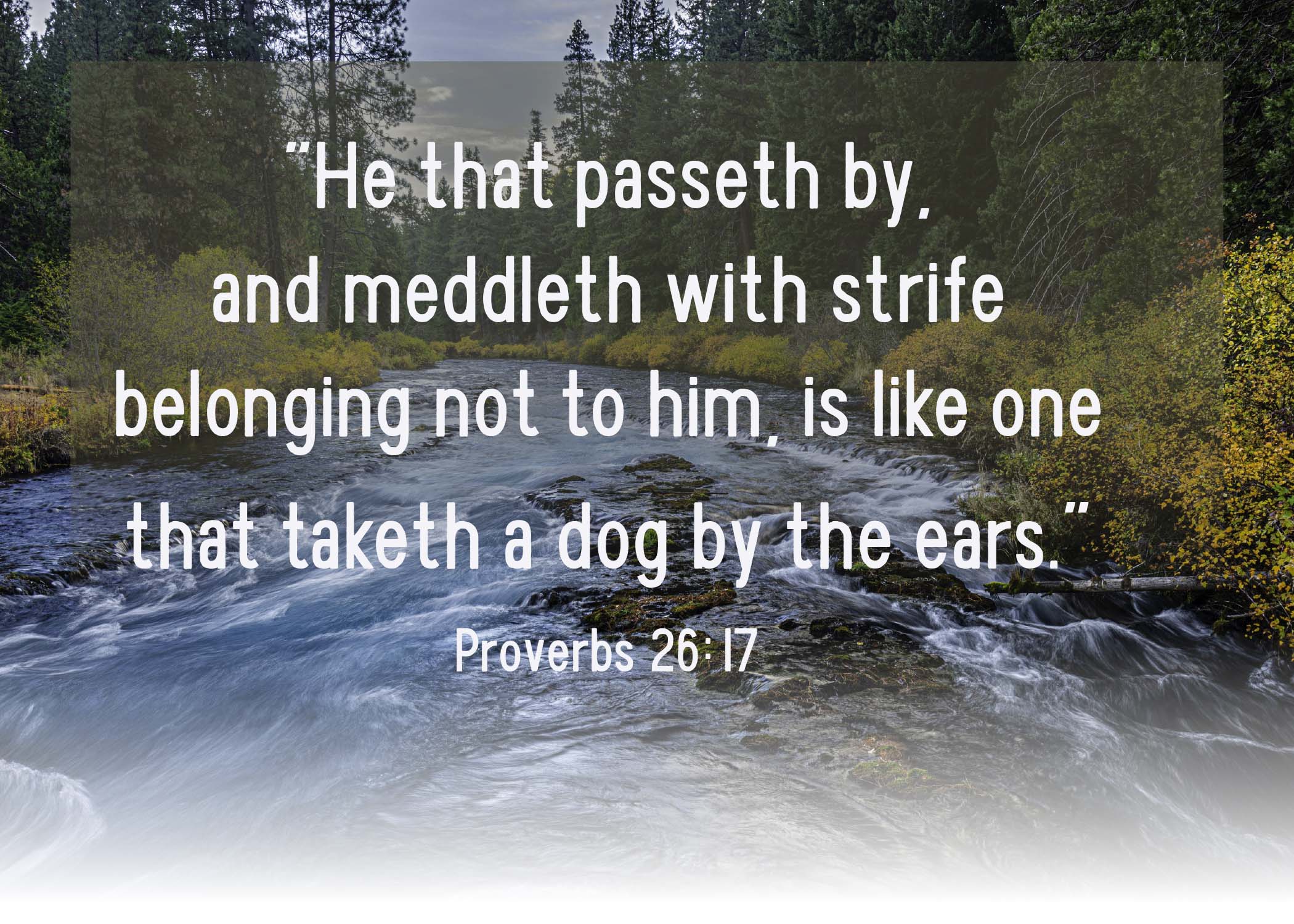 Recently, a friend came to me seeking some counsel regarding another person. I smiled at her frustration with this person because I, too, had some negative feelings toward them. At first, while she told me of what this other person was doing, I thought “how awful! I knew something seemed off about them.” I started to jump on the bandwagon with her, placing my justified judgment upon this other person.

But before I got too far, I felt a nudge in my spirit to be careful. I knew this was my friend and I wanted to take her side. I knew I had negative feelings already toward the other person and that could cloud the counsel I gave her.

I wanted to be a wise friend—one who actually helped my friend be a better person. I wanted to be able to put my feelings aside and give wise counsel based on truth, not friendship or my personal feelings.

So I took a step back and did several things before speaking to her again on the matter.

I prayed. I asked God for wisdom to help me actually be a good friend, put my own feelings aside, and give counsel based on truth, his Word. I asked for understanding and discernment.

I sought wise counsel from my husband and one other friend on the matter. It’s important to me to seek counsel from others who are not swayed by emotions or friendships, but who will give me the truth even if it’s not what I want to hear. Those people are rare.

I gave it a little time so I could think, pray, seek counsel, and also find a way to talk to her that she could understand and really hear what I was saying.

Meanwhile, my husband and I had been having an ongoing conversation about giving counsel and getting involved in situations that don’t belong to us. So I asked him, “What is the proper response to situations that arise between close friends, family, church members, or in general people around you?”

I love his advice:

If there is a dispute between two people that doesn’t belong to you, then it’s not for you to get involved with in the first place—on either side. As it says in Proverbs 26:17, “He that passeth by, and meddleth with strife belonging not to him, is like one that taketh a dog by the ears.”

It isn’t for you to go in and give them advice or judgment. If you’re not a part of the situation, you don’t know all the details so your judgment won’t be accurate or just.

If both parties were to come to you together and say, “Hey, we have this dispute and we both trust you to have the wisdom to be the judge over this matter,” that would be different. Then you would hear both sides of the matter from both parties. Doing so gives you a more complete understanding and a better, more just judgment over the matter.

If only one side comes to you, you cannot accurately judge the situation with wisdom, truth, and justice. The only thing you can do if one party comes to you is advise them on their own attitude and actions. If you have not been made the judge by BOTH parties, you cannot fully give just judgment.

It can be hard to stick to that because that’s usually not what the one party coming to you is looking for. They’re often seeking affirmation of the judgment they’ve already made. They want you to join them in their condemnation of the other person. And it’s easy to do that, because it feels good in the moment; your sense of justice will seem to demand it. But the other party isn’t seeking your counsel, so pronouncing judgment on both parties is fruitless—or it will bear the sour and rotting fruit of bitterness and self-righteousness in both you and the one coming to you for counsel. Wisdom is mindful that you aren’t in a position to change the other person, but you CAN help challenge the person coming to you to walk in truth and love.

I loved this! He made it so simple.

It’s easy to want to jump in and give advice or judge a situation, but I have to remember if it’s not mine, I will never fully know the matter or be able to give just or wise counsel. If I haven’t been made the judge over the matter by both parties, my duty is to literally mind my own business—to not take the dog by the ears, unless I want to get bitten.

From Our Mailbox - A "Saved" Amish Lady