Filter by:
NGJ Magazine / Articles / Rescued Raptor
Do you get our FREE Magazine? 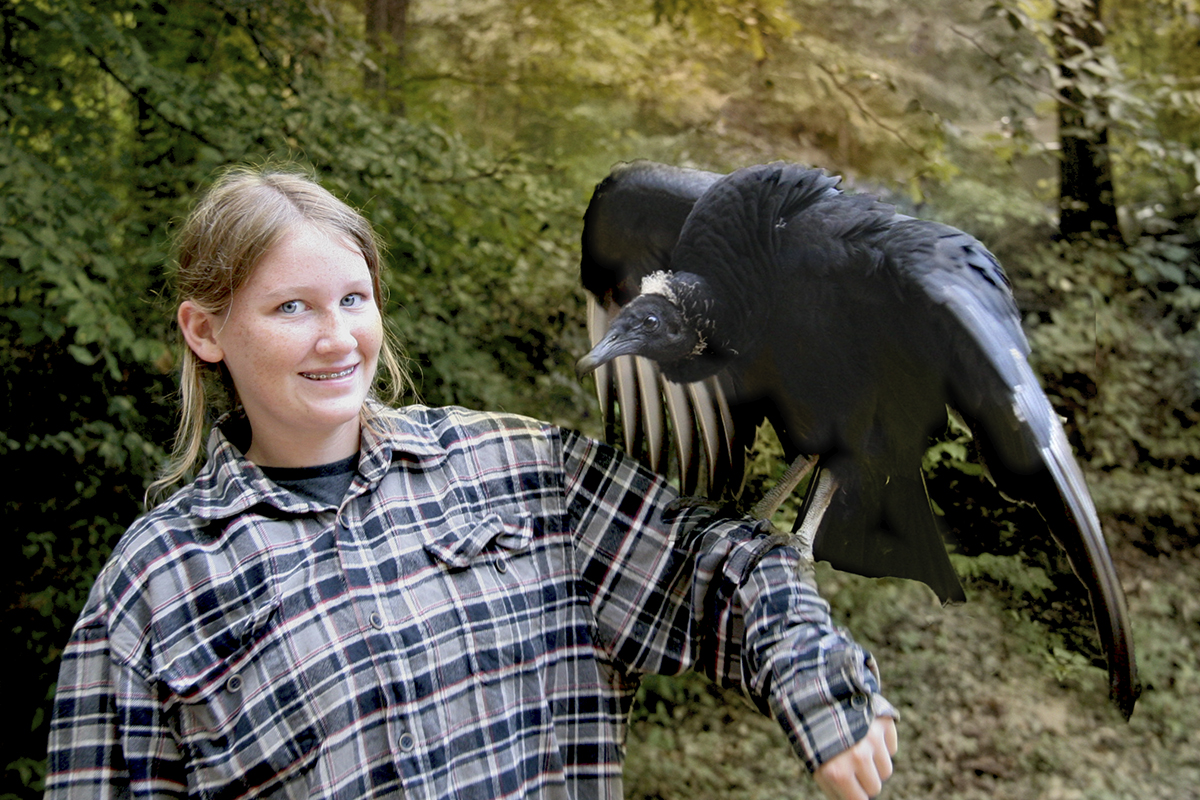 Ever since I was a young girl of nine, I wanted a raptor (bird of prey) for a pet. I just never thought it would be a vulture. Yep, you heard me right. I have a pet vulture.

And not just any vulture, but a black-faced vulture. They are slightly smaller than a turkey vulture and slightly bigger than a red-shouldered hawk. But before I give you all the information, let me tell you how I came to be the proud owner of a carrion-eating beast.
First of all, she isn’t really mine. I share her with my brother, who found her. It was on a boring Monday afternoon—I say boring because Mondays are typically uneventful. We were working, and Mama and my brother were bringing us lunch. It was then they told me they found a little vulture chick in our derelict barn. They couldn’t put it back in the barn, so rather than leaving it to scavengers, they rescued it. I was the most excited 13-year-old in the world.

When we got home later that evening, I got my first glimpse of the little ball of fuzz that would later be called Serafina. She wasn’t as ugly as you might think. She looked kind of like an eagle chick, with yellowish-white fuzz covering her body and only a small patch of bald skin around her eyes. Of course she’s a raptor, so she had a sharp, hooked beak designed to rip flesh from carcasses. She had milky black eyes and huge, awkward feet, and she sounded like a dinosaur from the prehistoric age. Her wings were just little stubs, and she was about the size of a small chicken. She really stank too. When she walked, she looked like the offspring of a drunken penguin and an emu. I named her Serafina, a name befitting a black-faced vulture of her class.

During the process of raising Sera, I learned many things. First, black vultures are much easier to raise than bluebirds. She required a lot less attention than your average passerine. She could be fed every two to three hours, although I fed her every hour, and she was not picky. She ate snake, squirrel, possum, chicken, beef, pork, fish, eggs, and random bits of plastic and metal she found around the house. She even ate a whole .22 bullet once, much to my horror.

Second, I learned that vultures can be very sassy even though they are sociable and friendly. Whenever we ate outside, she would walk as close as her clumsy feet would let her. She preferred to sit in my lap like a chicken. Sometimes we look out our front door and see her dancing around the porch, holding a glove or piece of plastic in her mouth.
I learned how very independent vulture chicks can be. She fought off any living animal that came her way. Even dogs wouldn’t come near when she spread her stubby wings and hissed at them.

I learned that black vultures can only make two sounds. The first is a low, scratchy growl that comes from deep within their throat. Even though it sounds menacing, it actually means she’s happy, playful, or hungry. The second sound is a light hissing, like air being blown out of your throat. She makes this noise as a warning, when she is scared, or when she is upset.
Serafina grows much more slowly than a passerine. At about one month, she began getting her primary and secondary feathers. This was a horrifying process. Soft, downy feathers came away in patches, and black feathers replaced them, but not quickly. She had pointy feathers and soft feathers sticking out everywhere, and she looked like a scorched mutant bird creature. The molting process took about a month, and then she looked like a fully fledged vulture, except for a small patch of yellow feathers on her head.

She ate more and more, and eventually some friends of ours began hunting animals for her. We never gave her rotted food, and as a result she smelled much better than your average buzzard.

My brothers built a wooden structure that resembled a doghouse that I rearranged for Sera, but when she got too big for it she slept under the house, completely free. One day when it was raining, she got soaking wet, so we put a heating lamp on her. She sat under it and spread her wings out to dry much like the wild ones do when they get wet.
By this time she could fly, and I wanted to train her. I knew she wasn’t a true raptor, like a falcon or a hawk, but she was intelligent. I couldn’t hold her on my bare arm, because her sharp talons had cut me on more than one occasion, so I wore my dad’s coveralls or a leather glove. I built a little perch for her to sit on, and I stood away from her with a handful of meat in my pocket. After making sure she was hungry, I called her with a sharp hissing sound that I use when I feed her. For the first couple of tries, she only flew to my feet, but on the fifth try, she landed right on my arm. I rewarded her handsomely, and over the next few days I trained her the same way. Now she always flies to my arm.

Serafina is quite curious. If we are outside building something, she is right there next to us, and when she sees other buzzards soaring in the sky, she tilts her head sideways and stares at them. But she never tries to fly away.

Sometimes when we go outside she is sitting on the porch railing (unfortunately for me since I have to clean the poop off) or on the roof. On very rare occasions, we call for her and see her launch from the neighbor’s yard. She isn’t cute anymore, but that’s okay because now she looks like a fierce predator. And every day when she sees other buzzards riding thermals in the sky, she stays right where she is, even though she can fly now. I don’t doubt that someday she will want to leave, and when she does, I’ll know I have successfully raised my very own black-faced vulture.

Ashley Pearl is Michael and Debi's granddaughter and is an aspiring author! You and your children will enjoy reading Ashley's first published article The Embarrassed Rooster of Kauai.

Be sure to check out Ashley's Facebook page Adventures With Ashley and Serafina for pictures, videos and updates about Serafina!