Filter by:
NGJ Magazine / Articles / Shifting Gears
Do you get our FREE Magazine? 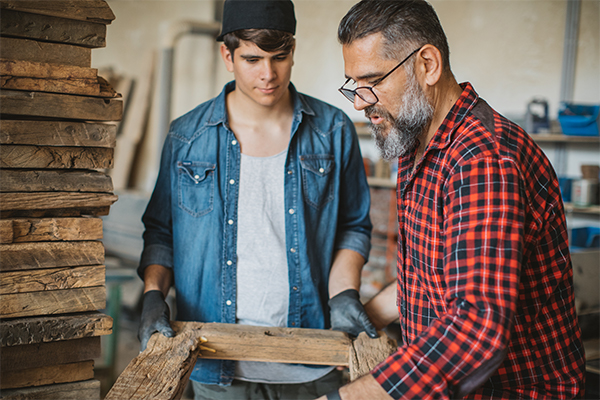 You know that kid you sometimes see at the grocery store? You know the one. She exclaims loudly for the whole store to hear, “No, Mama, I want that one!” To which Mama quickly replies, “No, sweetie, you can't have that one.” The little wretch then runs around the harried looking mama, grabs the desired bauble, and screams, “IT IS MINE AND I HATE YOU!” At this point you look over at your cart full of children and beam at their clean, well-behaved, smiling little faces and lock eyes with your oldest daughter. The two of you share a smirk at this poor lady's inability to see the train wreck that her lack of control is creating in her daughter's life.

It's times like this that you treasure every moment of work and intentionality that went into training your obedient, delightful, little angels! It is certainly true that there is no greater joy than to know that your children walk in truth. It also doesn't hurt the joy factor when everyone else in the grocery store, restaurant, parking lot, etc. knows that your children walk in truth.

More than once, my wife and I have gotten to the register at the restaurant and had the manager say, “The guy that went out in front of you paid for your meal and told us to let you know when you walked in with four kids they expected to have a terrible meal but it was delightful sitting at the table next to you."

Growing up as I did in a well-ordered, happy home, providing the same for my children seems second nature. The problem that I am running into is that I don't have children anymore!

Instead, I find myself more often shocked at the young men and young women living in the house with me. I'm not sure when it happens, but at some point, your children stop being children and they become your grown-up sons and daughters. The Bible makes a distinction between children and adult sons and daughters when it clearly delineates between the two groups by giving two distinct commandments in Ephesians 6:

1 Children, obey your parents in the Lord: for this is right.
2 Honour thy father and mother; (which is the first commandment with promise;)

I think this distinction is critical in how we respond to our children and later to our grown sons and daughters. As parents of young children, one of the most important things that we can do is to establish controls in their life that will teach them self-discipline.

When my daughter was 4, I was at a friend's house, sitting next to her to enforce my law that she was to eat all four green beans on her plate. She did not like or want to eat the green beans, and yet I insisted as her father and law-giver that she eat them all in one sitting. When she threw one of them on the floor, she got a swat and two more green beans to replace the one she should have eaten.

After around a half hour of my daughter getting my patient, undivided attention, a young man in the house asked me why I cared if she ate four green beans; he suggested that it was a waste of my time to continue to enforce my law for so little reward. I looked up at the teenager and told him that I wanted her to eat the green beans so that she did not smoke marijuana when she grows up. He looked alarmed and confused. “What do green beans have to do with marijuana?” he asked pensively.

I told him that by teaching a 4-year-old to follow a given law in spite of her desire, it would impress on her the necessity of being in subjection to the law of God when she was grown. This is a lesson that I think many of NGJ's readers know very well.

The problem, as I see it, is that when the transition takes place from child to young adult, we have a natural inclination to continue perpetuating the careful control that has served us so well up to this point. When my mostly-adult daughters get ready for work and I see that it is time for them to leave in order to make it to their job on time, I have a tendency to take command the way I always have and create order in their young lives by telling them as their father/law-giver to stop dallying and get in the car. The problem is that at some point they need to be able to make executive decisions independent of my authority.

As a father of teens, my primary goal is not to fix problems but to give them the tools needed to fix their own problems. Life is messy and they need to learn when to use the broom. That means at some point I need to move from commander to adviser. I will always be their confidant, friend, and cheerleader, but my days as law-giver are numbered; soon it will be up to them to transfer their fidelity from me to the one I have had the honor to model, as a placeholder, for a short time in their lives—Jesus.

Just as when my children were small and I looked for any opportunity to teach a big lesson from a little green bean, when they are big, I actively look for any opportunity to teach executive decision making from the shelter of our care. If, in the name of "taking care" of my children, I forget to transfer authority to the young man or young woman living under my roof, I will have deprived them of the safety net that comes with learning to make inconsequential decisions before the big ones come along. I find that I have to be more intentional, more prayerful, and more carefully thoughtful when it comes to removing the controls that I have put in their lives than I had to be when putting those controls in place.

The thing that endlessly pushes me to get this right is the knowledge that they will grow up whether I do a good job or not! And I know that the consequences of failure will be one of two things: either they will increasingly fight me for the right to be the architect of their own future until an emotionally fragile adult jumps ship, or worse, their ability for independent decision making will be systematically crushed until any thought of life outside of my punctilious control is beyond their emotionally deformed grasp.

It seemed so effortless when my parents casually let me go camping at 12 years old without carrying clean water, a spatula, or a skillet. Instead, I showed up at the campsite with a grill, a half dozen broken eggs, and a mostly wet sleeping bag. I got hungry and cold and learned a much more valuable lesson than I would have if they had made me take all the necessary accouterments for a good campout. Oh, I had lots of fun and I was hungry and had a cough for a month, but I also learned to take responsibility for my actions and to be prepared ahead of time for my own comfort's sake.

Like I said, it seemed effortless at the time, but from the other side of this thing, I find a lot of bite marks on my knuckles as my knucklehead son goes camping, or to work, or makes a purchase that I don't deem to be well thought out or properly prepared for.

I find that I like the role of commander better than the role of advisor! However, if I don't allow my sons and daughters to take command of their own lives, then all of the training that I spent years accomplishing has been for naught, because my single focus, my every hope for my children has been for when they grow up! Well, this somewhat disgruntled dad has had his children grow up.

If any of you lack wisdom, let him ask of God, that giveth to all men liberally, and upbraideth not; and it shall be given him. (James 1:5)