Filter by:
NGJ Magazine / Articles / Shock: Have the Steeles stopped homeschooling?!
Do you get our FREE Magazine? 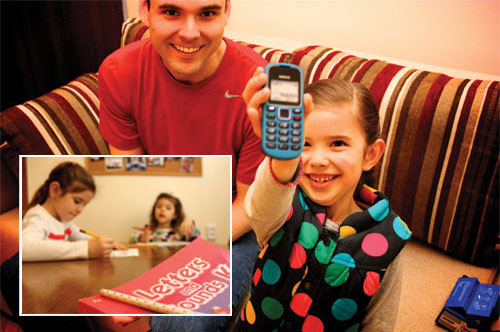 In one of my recent blog posts I shared some pictures of Abby receiving her first cellphone. As part of that post, I mentioned that one of our reasons for getting Abby a phone was so that we could get in touch with her while she was at school. No sooner had I published that post than I got a note from a friend in the US asking why our kids were going away to school. Maybe you asked that question too. Here’s the answer.

Kelsie and I are as committed as we’ve ever been to homeschooling. Fear not: we haven’t fallen off the bandwagon. The “school” that Abby goes to is a two-hour class, three times a week at the church we attend. Our purpose in sending her there right now is primarily to help her establish a foundation in Ukrainian language skills. At the school, they mostly sing songs, paint pictures, and—believe it or not—have a 30-minute English class! The primary benefit is that for two hours Abby is forced to interact with children and adults that speak to her almost exclusively in Ukrainian. That’s something we can’t give her very well at home.

At home, we speak English. But since we live in Ukraine, we believe that our kids need to speak Ukrainian well. This is not only a matter of culture but of security. For example, if, God forbid, Abby or one of the other kids were to get separated from us in town somewhere, they need to be able to tell someone who they are, where they live, etc. So “school”, as we call it, is more like “language lessons.” Abby is already doing her regular school subjects at home with Kelsie, and based on her progress in Ukrainian, we will probably discontinue that class after the spring semester is over.

I think it’s important to remember that homeschooling is not defined simply as filling out textbooks within the four walls of the family domicile. The vision and power of homeschooling is about parents taking responsibility for directing both the character training and academic development of their children. In modern society, the trend is to pass off that God-given duty to someone else, often the State. We, like many thousands of other parents, have seen the dangers and shortcomings of America’s current public school system, and we desire to give our children something much better. That said, we also believe that delegation is a big part of successful education.

The job of the homeschool parent is not to know all there is to know about every academic subject so as to personally impart that knowledge to the child. Rather, the wise homeschool parent takes charge of the child’s entire training program – both spiritual and academic – teaching personally when possible, and bringing in carefully selected tutors when needed. It is our belief that parents are the principals of their own schools. It is the parents who are the most qualified to select the teachers and subjects best suited for each of their children.

This managed education paradigm is in itself a valuable asset for any child as he enters adulthood. Even though I am married and working as a full-time missionary, I am constantly learning new things. I am the manager of my own continuing education. I certainly don’t know everything—far from it—but I do know how to learn anything I need to learn. The world is my classroom, and when I need a new skill, I simply seek out the appropriate resources and educate myself. This might involve reading a book, doing a series of Google searches, watching screencasts, or even attending college classes. But the important thing is that I am in charge of my education. I choose to learn things that are relevant to the work I am doing.

Education is simply a means to an end. In the real world, you don’t get any tangible credit for simply completing a course of training. You don’t even get much credit for demonstrating that you are proficient in a particular skill. (Your diploma alone won’t feed you.) A person gets credit for applying his skills in a useful manner that is marketable to someone else. If you do that, you get paid. The key issue is not so much the path you choose to acquire new skills, but your ability to use those skills profitably. Granted, demonstrating that you completed your education at this or that university has value, but in the end employers don’t pay their employees for attending a particular school. Employees get paid because they do the job they were hired to do. If they can’t or won’t do their job, their education won’t keep them from being fired. That’s the real world, and that’s the world for which parents should be preparing their children.

I’ll never forget something my mom told me years ago about her goals for our education. Speaking in the context of academic training, she said, “My job is to teach you to read. If I’ve done that, then I have given you your education.” Think about that. In our information-oriented society, reading is more important than ever before. One who reads well can potentially acquire an unlimited number of skills. Of course, my mom taught my siblings and me much more than reading alone. We had all the normal subjects: math, language, history, science, and so forth. But the most valuable skill she gave us was the ability to acquire knowledge independently and apply that knowledge practically. In my humble opinion, that is the essence of homeschooling.

7 comments on “Shock: Have the Steeles stopped homeschooling?!”