Filter by:
NGJ Magazine / Articles / The Boys of Boston Shall Lead Us
Do you get our FREE Magazine? 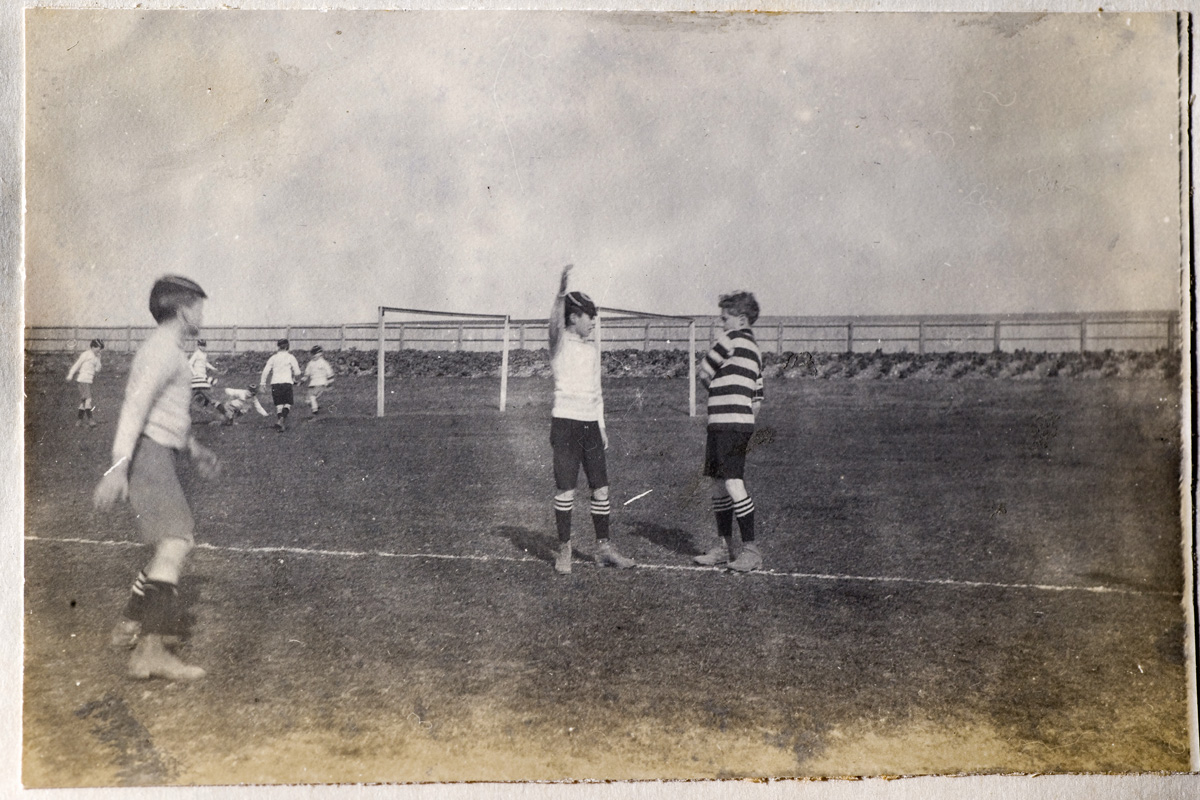 God created us to be happy. How is that achieved? Science has something to say about it. In high school, most graduating classes vote on who they think will be the most successful in life, who will be the most famous, who will be the happiest, etc. Who’s doing the voting? Just a bunch of hormone-driven teenagers who are missing at least half of their brain's prefrontal cortex. If you go back to your old yearbooks (as I have done), you will see that we didn’t know much about what made a person successful and happy. Who among us looks back to our high school days and can say our votes were spot-on?

When you are young, the things that seem the most important are money, glory, and status. As you age, those things dim until they are not really important at all. I know there are thousands of millionaires in the Unites States who would give all they have for the promise of just one person who would love and stand by them in the coming storms of life. Around 45 to 50 years of age, we realize that the best of life is behind us and we are beginning the straightaway to the finish line. That assessment produces what has been called a “midlife crisis.” There is an awakening as we realize that the only things that matter are love, health, and happiness. There comes a day when stuff is just stuff; expensive stuff is still just stuff. A big house is still just a house that takes more effort to get around in. The same goes for expensive cars and gourmet foods. We all eat just one bit at a time, and the most important concern is that it will contribute to our health. Happiness is eating a simple, healthy meal with someone you love. The trappings are of no consequence whatsoever.

Eighty years ago a farsighted Harvard professor, Dr. Clark Heath, started the Harvard Study of Adult Development. In 1938, during the Great Depression, Dr. Heath enlisted 268 Harvard sophomores to see what could be learned through a longitudinal study as to what makes a happy life. Remarkably, unlike the vast majority of lifespan studies, this one has continued even to this day. Now the children and grandchildren of these original men are being studied.
They catalogued information on their health, private life, social events, hopes, dreams, disappointments, fears, failures, loves and loves lost, and many other topics. Each man was contacted every other year and their information was added to their file. Researchers also visited each man in his home to observe his family life. They felt it was vital to their accuracy to observe with their own eyes the man and his wife, his family, and his neighbors, which often paints a different picture than in an interview. Blood tests, doctors’ reports, failed marriages, triumphs, and failures were all carefully recorded and put on file.

Years passed, decades came and went as information was catalogued on each man. The study had four directors over the years and a multitude of researchers who gathered seemingly random information slowly building a profile of the lives of these 268 men. In the 1970s, MRI and later fMRI brain scans added new dimensions to their study. As researchers sifted through the stacks of reports, startling trends began to take shape—results that were not expected.

The men were all “blue bloods,” Harvard men, educated, wealthy, and born into great opportunity. For example, President John F. Kennedy was one of the original boys recruited. With the surprising results, researchers wondered if a totally different strata of males would yield different results. They decided to do the same study on young boys who were not so privileged.

So in the 1970s, 456 inner-city, low-income street boys, ages 12 to 16, were enlisted as part of a study called the Glueck Study. The same protocols used in the Harvard study were applied to the inner-city boys. As before, questionnaires were sent out every other year, doctors’ reports were gathered with blood tests, X-rays, home visits, etc., and slowly their profiles joined those of the Harvard men.

Over the years some of the men were killed in war or accidents. President John F. Kennedy was assassinated, and some dropped out of the study, but most of the men continued sharing their lives in hopes that the information would help others. It took a lifetime—eighty long years with thousands of reports—to establish a clear pattern that no one could question. Various schools of thought had asserted that health and longevity were determined by diet (vegetarian or not), smoking or not, alcohol consumption, cholesterol levels, fat consumption, exercise, availability of medical treatment, etc. But it was through the lives of these men that we learned the single most determining factor in how to have a happy, long life.

Researchers pored over mountains of data, searching for that magic that makes life happy and healthy.

Dr. Robert Waldinger is the fourth director of the study, a psychiatrist at Massachusetts General Hospital and professor of psychiatry at Harvard Medical School. Reviewing the eighty years of data, he said, in a TED Talk titled, What Makes a Good Life? Lessons from the Longest Study on Happiness, Dr. Waldinger said, “When we gathered together everything we knew about these men at age 50, it wasn’t their middle-age cholesterol levels that predicted how they were going to grow old. It was how satisfied they were in their relationships. The people who were the most satisfied in their relationships at age 50 were the healthiest at age 80.”

The study showed that genetics and long-lived parents and grandparents proved less important to longevity than having a good, loving relationship in mid-life. The men in both groups who reported being closer to their family, friends, or community tended to be happier and healthier, both physically and mentally, than were their less-social counterparts. They also tended to live longer. Those who reported being lonelier were less happy, less healthy, and did not live as long.

Research showed that it is the personal relationships, support, and shared dreams that delay mental and physical decline. It is the simple pleasure of having people in your life who really care about you that is the predictor of a long, healthy life, not social class, IQ, diet, or even genes. This finding proved true across the board among both the Harvard blue bloods and the inner-city ruffians.

Incredibly, researchers were able to look back into the files of all the men when they were 50 years old and successfully predict who would still be living happy, healthy, and clear-minded into their 90s. This was shocking. It was quite amazing to be able to read a report of a man’s life when he was 50 years old and predict that he was one of the ones who had most likely lived until he was in his 90s. Of course there were exceptions to the pattern. There were a small percentage of lonely jerks who lived to torment their nursing home attendants, and there were some happily married souls who died earlier, but the general trend showed overwhelmingly that good health and long life are best predicted by relationship contentment at age 50.

There are so many life-altering, diverging paths in life, so many chance meetings of persons who could appeal to lust and draw one away from the stable continuity of family life. One doesn’t just trade his integrity for a thrill, he trades it for his health and long-term happiness.
These studies proved that marital satisfaction protects mental health. Having family, friends, community, and extended community is needful for good health and happiness. Even for couples who bickered most every day, there were still long-term positive results if they felt their spouse would come through for them. It was the knowledge that someone loved you enough to “have your back.” Someone was watching out for you; someone was concerned for you above all other. That someone might be mean and ornery, selfish on occasion, or irritate you on a regular basis, but there was peace in knowing that someone would stop the world if you really needed it stopped. True happiness is found in knowing you have that someone.

This eighty-plus year study clearly demonstrates that “loneliness kills.” Loneliness is a choice that can be changed. It may take effort and stepping out of your comfort zone, but your life and mental stability depend on you making the choice. God hates divorce—for our sake as well as his. Marriage requires a lot of forgiveness, forgetfulness, and unconditional love. It requires mercy and judgement. Human nature leans more toward judgement than mercy when it comes to our closest and dearest.

Sometimes we have no choice in what life hands us, and it is those times when we have to see God’s bigger picture. Today I saw a Facebook post of a divorced friend who has a young son but very little extended family. She was publicly thanking an old man for being a good friend in helping her put up curtains. The old man has little family left alive and has never gone to church, so he has no church family. He doesn’t know God, but he has been an honest, hard-working fellow all his life, with no taints hanging over him. Now his family is dead with only a daughter left who lives in a distant city. He has been a good friend to many, but he is lonely. My young divorced friend is often lonely due to circumstance that could not be avoided. Her little son is at an age where he always wants more friends and things to do. She could go grab another more capable friend to help her hang her curtains. She is young and beautiful, so it would be easy for her to get a helping hand. Mr. George, on the other hand, would find helping her the most delightful thing that had happened to him all week, maybe all month. He will doubtlessly be sore from stretching to drill the holes and install the screws, but every sore muscle will remind him of his friend’s delight. He was able to pour into her life and that of her young son. Nothing else brings him as much joy as times like this. Mowing someone’s grass, helping shovel their snow, driving them to the store, or sharing a cup of tea is a satisfying occasion. Mr. George needed a friend, and this young woman is a friend. This divorced woman will never really be alone because she has learned the art of being a friend. Her life will be filled again as surely as she filled Mr. George’s need for a friend. You can see that he will be open to her giving him the gospel. This is God’s love: “We love him, because he first loved us” (I John 4:19).

Don’t look for a friend so you will not be lonely. To be truly loving is to search for someone who needs you. Loving is not waiting on others to love you; it is loving the lonely and less lovely. God designed us to be givers. He designed us to go out and find others to pour into. He created us to go into the highways and byways and compel the needy people, lonely people, hurting people, and empty people to be our friend first and then God’s friend. Life is loving and giving yourself to others and, in return, love finds a way back.

The Will To Dominate