Filter by:
NGJ Magazine / Articles / The Most Gracious Miss Grace
Do you get our FREE Magazine?

The Most Gracious Miss Grace 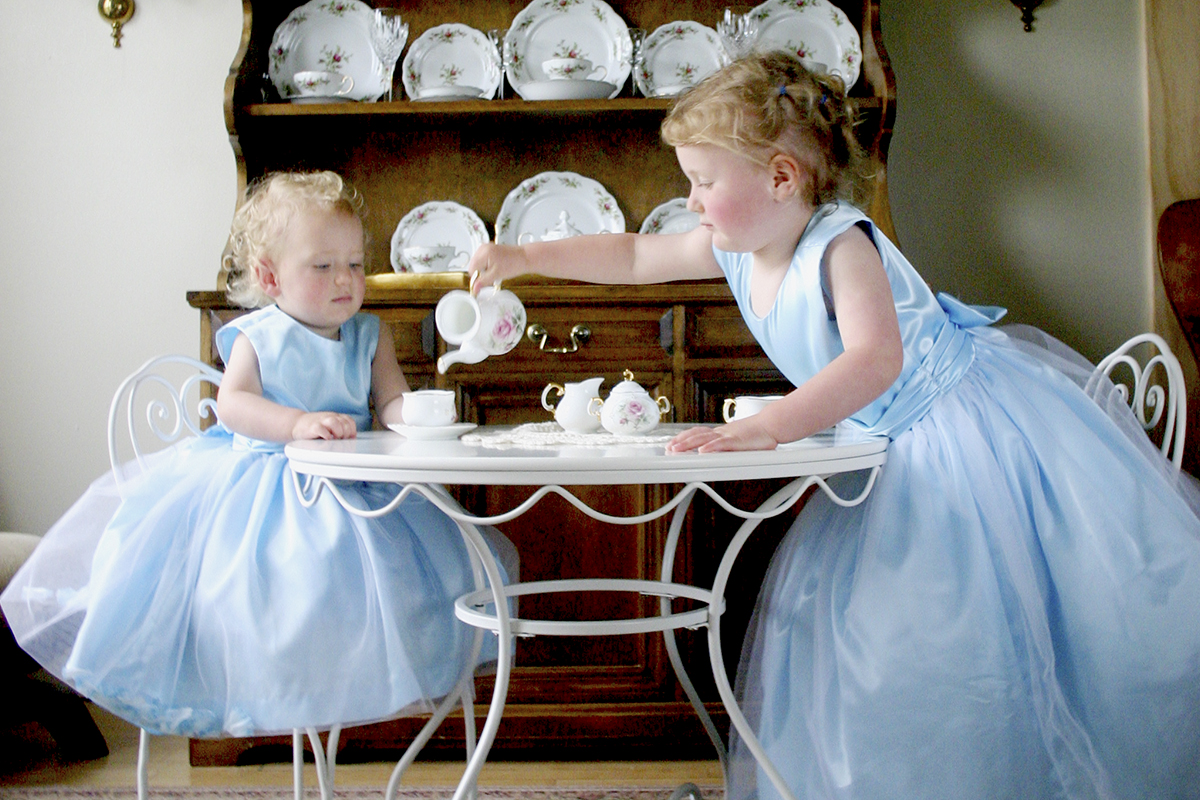 Miss Grace lived in a tiny apartment adjoining my grandmother's big rambling home. I remember many times sitting at her small, fold-down table having a cup of tea from one of her tiny tea cups. Where we sat was a bookshelf of sorts filled with 30 charmingly arranged miniature cup-and-saucer sets. They were always carefully dusted and displayed. The whole scene looked like a picture. She said every set was a gift from someone precious to her.
When I was a child, she had a way of making me feel important as I sat with her sipping from her dainty cup and eating stale cookies that I clearly remembered from the last visit several months earlier. I assumed either she rarely had a visitor or she saved that particular type of cookie for me. Miss Grace worked at the public library, which at that time was an important hub of society. She made $30 a week, so her larder was quite sparse.

One day as I sat at her table sipping and visiting, one of my rude boy cousins burst into the apartment and fussed harshly at me for leaving my grandmother's front door open in the cold of winter. I knew I was not guilty and my face probably showed my anger. Miss Grace had the teacup to her mouth so I barely saw her lips move; her voice directed at me was just above a soothing whisper. “A lady is always gracious, maintaining her composure and dignity. God says, ‘He that covereth a transgression seeketh love; but he that repeateth a matter separateth very friends.’” I know she thought she shrewdly calmed the storm, but I would battle and win later. No jerk was going to blame me.

It irked me that she expected me to just roll over and play dead. I fumed, "You know I have been in here with you all morning. It was not me! Should I just let the nasty bugger off? It was probably him that left the door open! He always makes Granny think I am the bad one."
Her smile was familiar as well as a gentle reminder to me of my crude, childish tone. “The truth may never come out, but who is guilty is not as important as how we respond. It’s just a door and not a matter of honor, which, of course, would call for judgement. Wisdom is to know when it is right to stand for judgement and when to let it drop. Usually, we need to forgive. Granny knows that when you are not in town the door is left open, and so she knows the truth. God says, ‘Forgiving one another, if any man have a quarrel against any: even as Christ forgave you, so also do ye.’” She had plenty of Bible verses, as God was her substance.

At every magical visit she said something that profoundly affected me even when it was unwanted. Once while we sat at her table, I watched as she lowered eyes to her hands while they moved over her lap carefully smoothing the delicate material of her ancient but prudently kept dress. I grew pensive because I knew she was about to say something she felt was important. “A lady knows the difference between sexy and elegant and always seeks the higher ground. God says, ‘Women adorn themselves in modest apparel.’ You are almost a woman so that is written for you,” she said. I am sure my young teenage face blushed. I had no idea who told her about my new swimwear; it was probably my renegade cousin. Without a doubt, I knew she was referring to my new bathing suit, which was not in the least elegant. I have not yet learned how to rebuke someone so thoroughly while maintaining such graciousness.

Miss Grace was not a “Miss” at all. In her youth she had married a local man. Years passed and there was no child. She could have grieved, closed down emotionally, and begun the process of brain-death, but instead she found an outlet at the library working with children. Being childless was tough enough, but life hit her with the harshest of blows. Her husband had an affair with a much younger woman. The lady in question got pregnant.

Opinions have drastically changed in the last 80 years concerning divorce and unwed mothers. At that time in history a divorced woman always had a murky cloud over her regardless of how wronged she had been by her husband. An unmarried pregnant woman had a far worse cloud, as did the fatherless child. The young pregnant woman visited Miss Grace at the home that she shared with her then-husband, and asked her to agree to a divorce so she could marry the unfaithful husband before the baby was born. That is when Miss Grace became a Miss and moved into the tiny apartment that was attached to my Granny’s home. In all the years I knew her, I never heard Miss Grace’s last name spoken. In a town that small, everyone knew everything. I know that every day was a new day of holding her head high as people watched and whispered.

The new family quickly had several more children. A few short years later, very late one evening, the second wife showed up at Miss Grace's tiny apartment, and this time she was pitifully begging. Her husband was on a drinking binge, her babies were terribly ill, she was exhausted and they were in need of food, and no one was willing to help due to her sin. Miss Grace followed her home and for the next week cared for her and her children until they were well. She spent her own meager funds to buy necessary food. When the crisis was over she quietly returned to her tiny cups to sip tea alone.

My mom told me that in all the many years she had known Miss Grace she had never heard her say a negative word about her ex-husband or the woman who stole him. She did remember Miss Grace speaking with joy of his children and then his children's children visiting her at the library every afternoon on their way home from school.

When Miss Grace was 86 years old, she won the Gold Cup at the County Fair Senior Citizen's Beauty Contest. I was newly married but wanted to go to the fair for that one event. I remember Miss Grace’s tall, straight, slim figure dressed in a graceful, flowing new dress of subdued purple flowers walking down the runway with twelve long-stemmed red roses in her arms. Her silvery-white hair was pressed into small, tight waves reflecting a style 60 years gone. She was truly beautiful. The whole town rejoiced with and for her.

A few years later Miss Grace died peacefully in her sleep. Hebrews chapter 11 comes to mind when I think of Miss Grace. It is the chapter in the Bible listing the greatest biblical characters of all times. "These all died in faith, not having received the promises, but having seen them afar off, and were persuaded of them, and embraced them, and confessed that they were strangers and pilgrims on the earth. For they that say such things declare plainly that they seek a country. And truly, if they had been mindful of that country from whence they came out, they might have had opportunity to have returned. But now they desire a better country, that is, an heavenly: wherefore God is not ashamed to be called their God: for he hath prepared for them a city" (Hebrews 11:13–16).

By faith Miss Grace lived a life of grace and forgiveness, and although she had much cause, she had no voice to blame others. She forgave and went on with her life regardless of hardships, blessing all who needed her. Now 60 years later she is still blessing others.
“His lord said unto him, Well done, thou good and faithful servant: thou hast been faithful over a few things, I will make thee ruler over many things: enter thou into the joy of thy lord” (Matt. 25:21).

4 comments on “The Most Gracious Miss Grace”