Filter by:
NGJ Magazine / Articles / The Three Miracles of 2020
Do you get our FREE Magazine? 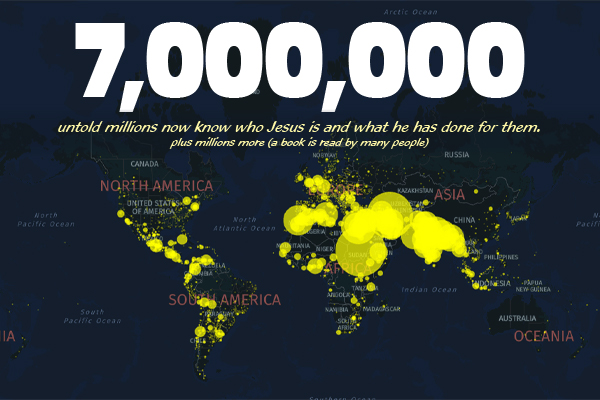 At the last quarter of 2019 a miracle started taking shape—a real God-given miracle. God let me know that beginning in January 2020 HE was going to open the hearts and minds of people all over the world, people from every tongue and nation, and it was revealed to me to get my staff working on language translations and formatting and not to let ANYTHING or ANYBODY slow us down. We had to focus as never before, as never in our ministry, as never in our entire lives.

I doubt that anyone really believed me, but it doesn’t matter when God has spoken. I was driven, and I drove all my staff as if their lives depended on it. I admit I can be a nuisance at times—my kids all say I have the energy and the personality of ten monkeys on a high dose of sugar—but I am sure I broke all records during the months of October, November, and December of 2019.

We already had the 330-page graphic Bible story book, Good and Evil, in more than 50 languages, many of them formatted for free online viewing. And for several years we have been advertising on Facebook in different areas of the world, offering a free download. The response has been tremendous with millions of views, but not like I knew was coming. We needed to accelerate formatting for the smartphone, as well as languages where the gospel had never gone or was now banned. Ethnic languages found in countries like Iran, India, China, basically all over the East, Middle East, and Africa were added to our list. JD, our resident geek, created an app to expedite this tedious work. It was a race because I KNEW that at the very beginning of 2020 the gates of opportunity would swing open for a brief time. I had no idea how much money it would take to reach millions of people, but I told my staff to spend all that came in. Usually we run a tight ship financially, always making sure there is money to reprint, pay staff, do upkeep, etc., but now I said, “SPEND until we don’t have money.”

I lay awake at night listening to Mike snore while trying to think of rich people that I could challenge to support this outreach. Believe me, I tried to convince a few, but NONE of the rich folks stepped up to support what we were about to do, so GOD gave us another miracle. He wanted me to see that HIS work would be supported by HIM. So miracle number two happened late in August 2019. Our small YouTube channel (The DOOR), to which we had been adding videos for 12 years, unexplainably went viral one day. JD, our IT man, said, “Hey, Mike went viral on YouTube!” I didn’t really understand the ramifications of that statement. JD tried to explain it to Mike and me: “Mike normally gets 10,000 to 20,000 views over several years for the average video that is posted on YouTube, but last week you got over 300,000 on one video, and this week you got even more. Besides that, over 75,000 people have subscribed to your channel this week.”

No one had a clue why and I had no idea this was one of the ways God was going to support the outreach that would make the gospel available to 7 million and counting. The new viewers on YouTube loved hearing Mike teach the Bible, and they really wanted to know about end times. Mike was using a Revelation chart he had painted 25 years before, and he mentioned people could buy the chart from NGJ. The Revelation charts began flying off the shelves. We reprinted. We made a huge banner size for preachers and teachers to use. So with the unexpected sales from new buyers and from many small gifts from the faithful folks that have stood with NGJ ministry, we now had the funds to advertise on Google and Facebook.

And then it happened. As we sat ready for a harvest, the dreaded Covid19 virus appeared and spread through the world, sending everyone home with nothing to do but access the Web. And there we were with the gospel message in their language

So the race to obey Christ’s last command began in earnest. Jesus had just been raised from the dead when he came to his disciples to give them his last command:

And Jesus came and spake unto them, saying, All power is given unto me in heaven and in earth. Go ye therefore, and teach all nations, baptizing them in the name of the Father, and of the Son, and of the Holy Ghost: Teaching them to observe all things whatsoever I have commanded you: and, lo, I am with you always, even unto the end of the world. Amen
(Matt. 28:18–20).

This was accomplished mostly through Google’s ad network. Every download of the Good and Evil reaches many more which means one contact can mean many people reading the gospel. This extreme response is due in part to the pandemic, analyzing and focusing on the best areas, as well as Google ads being financially cheaper than Facebook ads, we have cut average ad costs per person reached by about 2/3 when we switched the majority (90%) of our ads from Facebook to Google. Previously we targeted our ads to specific countries, but we now mostly run them across the whole world and let them automatically optimize to target the places getting the best response. Most of those reached are Muslims, or Hindus. Many are in nations where the gospel is restricted. We’ve set up accounts on WhatsApp and Telegram to make it easier for seekers to securely contact us. We have ministry contacts that assist with follow-up for seekers who contact us from Iran, India, Bangladesh, and Arabic-speaking countries. We’ve received numerous testimonies, particularly from Iran and India.

We currently have Good and Evil online in nearly 50 languages. Over 20 of these are now optimized for viewing on mobile devices, and we now have the software tools to greatly accelerate the process of mobile-optimizing the remaining languages, as well as new languages currently being translated. We have about a dozen languages in translation, which we’ll be able to use in the coming year. Also, the animated video version of Good and Evil is being recorded in several languages, which will be played on TV in India and elsewhere, as well as used in our online outreach.