Filter by:
NGJ Magazine / Articles / The Three Types of Men: Junior-Size
Do you get our FREE Magazine? 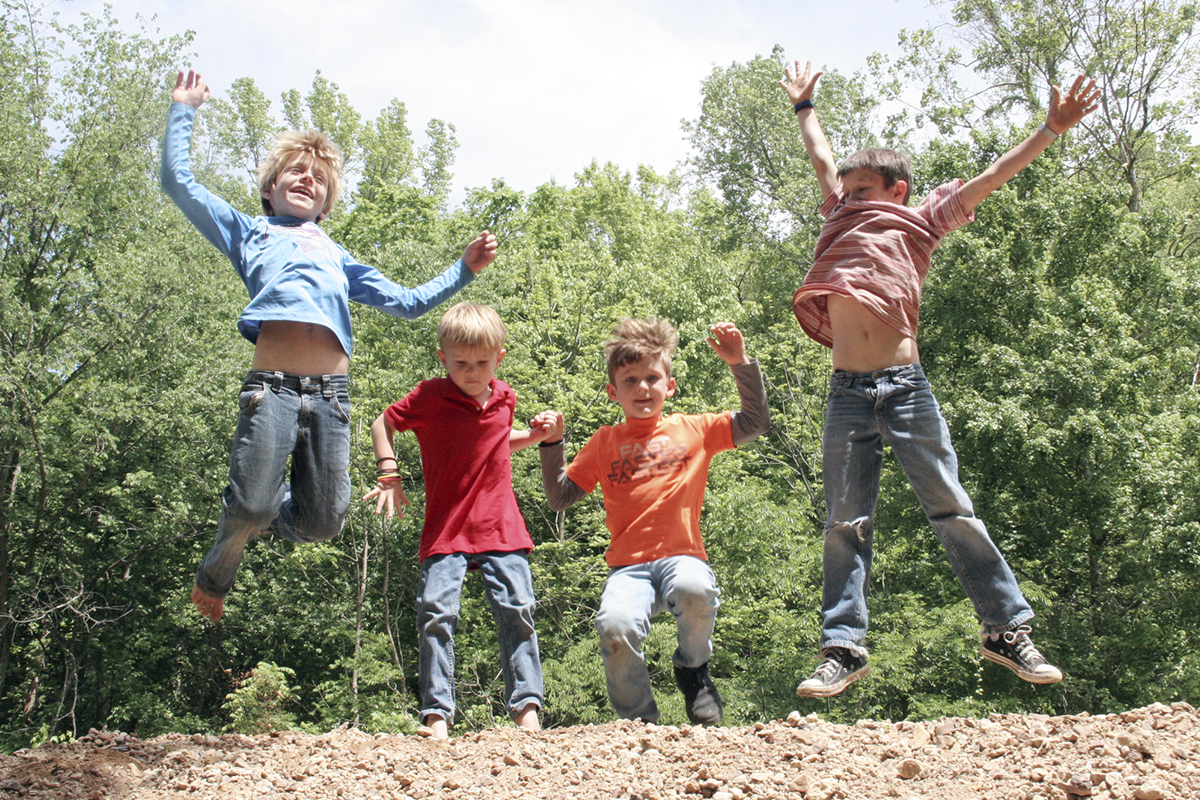 God is dominant—a sovereign and all-powerful God. He is also visionary—omniscient and desirous of carrying out his plans. And God is steady—the same yesterday, today, and forever, our faithful High Priest. Most men epitomize one of these three aspects of God, and with a little study we can begin to see the type of men our boys will naturally be.

A few men are born with more than their share of dominance and, on the surface, a deficit in gentleness. They are born leaders—we call this type Mr. Command Man.

A Command man expects to be waited on and obeyed. He is strong, forceful, and bossy. A Command man does not have much tolerance.

He tends not to share vulnerabilities and feelings, so you are left wondering what he is thinking. He seems to be sufficient unto himself. It is his nature to control. A Command man feels it is his duty and responsibility to lead people, and so he does whether people want him to or not. Because of this, a Command man—especially if he is very young and immature—is often seen as an obnoxious bully. He may balk at being given orders, since he feels he should be the one doing the commanding.

If a Command man is to become a benevolent, honest, strong, and fulfilled man of God, he must be given honor. It is very important to acknowledge his accomplishments and not shame or belittle him. Correct him, yes, but do not embarrass him publicly. Words of affirmation are meaningful for a young Command man, so be sure to notice and commend him when he does good things.

There are two things that a budding Command man needs if he is to become a man after God’s heart, and you, parent, are the one to provide them.

First, he must learn that, although he feels he is in charge and is capable of running the show, there is a power higher than he to whom he must willingly subject himself, just as a grown Command man subjects himself to God. He must learn the Christian chain of command and become a willing participant in it.

Second, he must learn that the natural ability to lead others is not permission to run roughshod over them. He must be taught to be benevolent—to use his leadership for the good of others and not for his own glory. One of the first rules of good leadership is that it is not about the leader, but about those being led. Parents can accomplish this by setting an example of good, godly leadership in the home. Those being led must feel they are under a compassionate authority, not a bullying dictator. Remember, more is caught than taught.

God is a Visionary as seen in his person the Holy Spirit. Prophets, be they true or false, are usually of this type. A Visionary is a shaker, a changer, and a dreamer. He focuses on peripheral issues and tends to have tunnel vision. He loves confrontation and hates the status quo. He often demands things be done “the right way.” This is the boy who will immediately notice if you say we are going to the library, but then choose a route different from the one you normally take.

Mr. Visionary is consumed with a need to communicate with his words, music, writing, voice, art, or actions. He is the “voice crying out in the wilderness,” striving to change the way humanity is behaving or thinking. He will be the first one to tattle when other children are not doing what he thinks they should, or he may take matters into his own hands and try to force them to behave a certain way.

He is an initiator and provoker, never leaving well enough alone. He is a trailblazer and a voice to get things done. He is tenacious and insistent, not one to quietly comply.

This boy is full of ideas, plans, and dreams, and he wants to tell you all about them. He wants your enthusiastic support, not a critique. No matter how crazy they seem, be excited about his ideas, and then gently steer him in a doable but not-too-tame direction. His curiosity is insatiable and he MUST know how things work. He will learn by doing, building, tearing apart, and rebuilding. You can help by providing plenty of old junk for him to build and experiment with: old, broken appliances and radios, scrap lumber and a few hand tools. This is the boy who enjoys learning survival skills, and his creativity in building a shelter or small animal trap may amaze you. He will build elaborate forts if given enough junk and a few trees near each other.

The Visionary boy needs good, wise, stable parents who have a positive outlook on life. He needs to feel his ideas have merit, even if they never come to pass. He needs you to be flexible enough to allow him some “crazy” within the bounds of safety. Strap a helmet on this boy’s head and let him test his three-wheeled go-cart on the steep hill out front. He will soon learn the stabilizing benefit of four wheels.

A Visionary must always be doing, so do not allow boredom. Keep a steady supply of junk and simple tools, have an old set of how-to books available, and plan plenty of family adventures. There are free options whether you live in the country or the city—make it your goal to find them. Keep art, music, and writing supplies handy. Have the children turn a Bible story into a full-fledged play with props, costumes, and a script, and invite the neighbors and grandparents. Record it on video to share with others. Indulge the Visionary’s insatiable need for creativity and discovery while teaching him to stop and consider the safety of his plans. Let him burn out on things that are not wise, but don’t throw water on his fire. Let him find his own balance by bumping into hard realities, but always remain supportive and enthusiastic. You may be raising the next Thomas Edison.

God is as steady as an eternal rock, caring and faithful, like a priest—like Jesus Christ. Many boys are made in this image. The Steady boy does not make snap decisions or try to tell other people what to do. He avoids controversy and quietly complies with the demands of others. He is a people pleaser. He is often described by his mother as a sweetheart, a snuggler, or a servant. For better or for worse, he is a follower.

The Steady boy will likely sit back and watch all that is going on around him, without comment and without adding fuel to the fire. He will allow others to take his toys without much protest, and he will happily trail along after more dominant personalities, willing to do their bidding without arguing. He will not stand up for his rights, and of the three types, he is the most likely to be bullied. He will play quietly by himself and may occasionally be forgotten because he doesn’t cause a ruckus. He often wants to help in whatever you are doing, even if it is baking, cleaning, or sewing. He loves to be a servant.

Because a Steady boy is happy in his little self-built comfort zone, he needs parents who are willing to gently push him out of his bubble. It would be very easy to let him remain as he is—a sweet, lovable follower—but we are talking about raising men here, men who will one day be required to lead their family and maybe more. So how do we keep the calm sweetness while building the leader?

Begin by encouraging your Steady boy to develop opinions. Help him work through the issues in his mind and know what he thinks and why. Do not be upset if he doesn’t have strong opinions, but do be patient and encouraging. Mother, as much as you love your little snuggler, make sure your Steady boy spends time with men doing men’s work. He needs that manly influence so he doesn’t turn into an emotional mama’s boy. Remember to consider what is best for your boy, not what is comfortable or pleasing for you. Always praise his efforts to be a little man, and provide opportunities for him to take the lead and be the protector.

Give all boys opportunities to make decisions that will affect others: What shall we have for lunch? What Bible story will we read before bed? What chore should we do this afternoon that will help Daddy? This will help each boy in a different way: Command man will learn to consider what is best for the whole group; Visionary will learn to consider those he is leading before he makes a snap decision; and Steady man will learn to make a decision, period. Remember that you are raising the next generation of leaders, and leaders of all types must be trained to lead well.

Be careful about the kinds of role models you set before your sons (and daughters). Children are like little sponges soaking up everything they see, hear, and experience. Think about some popular children’s entertainment: The Flintstones, The Jetsons, The Berenstain Bears book series. If your children are fed a steady diet of these, they will grow up thinking daddies are inept and foolish and mamas always fix the messes that daddies make. Never underestimate the power of outside influences.

Finally, it is important for boys to have a biblical view of what leadership is and is not. Do a study of Bible leaders with your children: Adam, Abraham, Jacob, Moses, Joshua, Saul, David. Learn from the good and bad kings. Compare Paul and Peter, Timothy and John. Let the children examine their character, their successes, and their failures. Learn together how to be good leaders.