Filter by:
NGJ Magazine / Articles / "The" Wedding
Do you get our FREE Magazine? 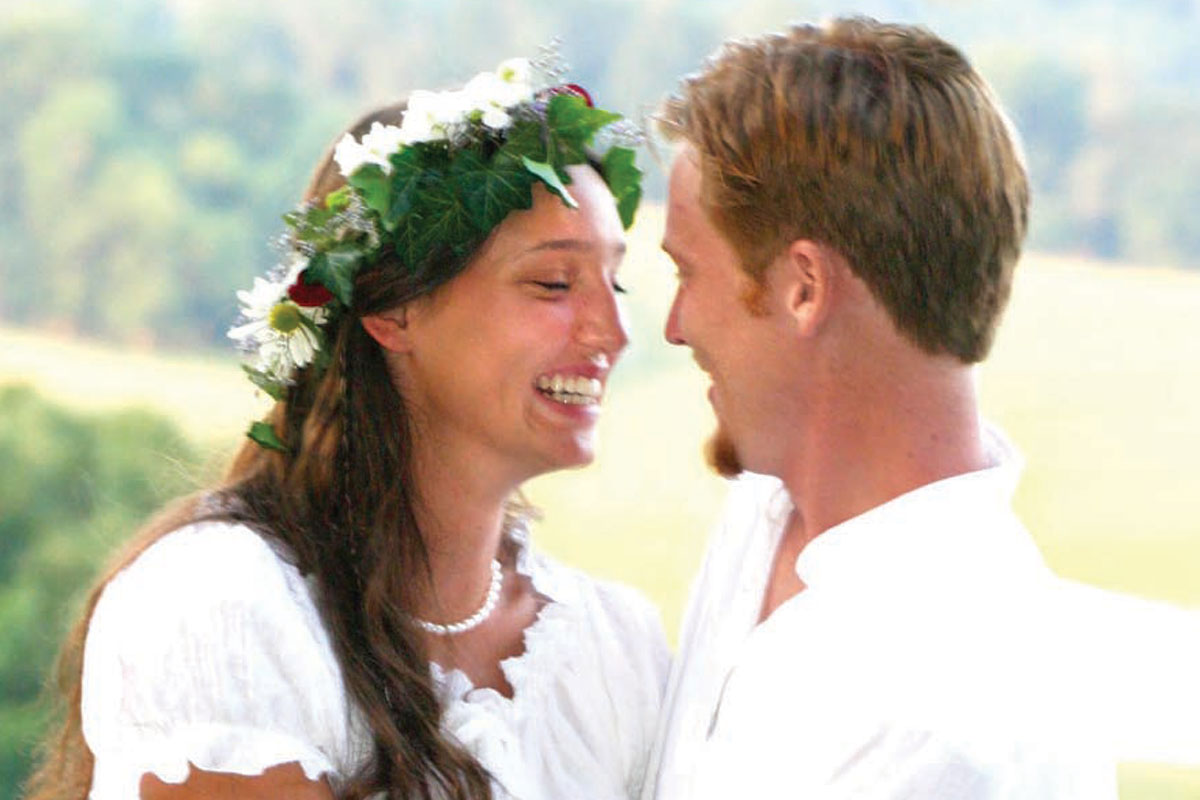 Our last daughter, Shoshanna, 20 years old, has joined the ranks of her married sisters. She is now Shoshanna Easling (husband James). There are weddings, and then there was Shanna’s wedding.

Some called it a production, others an experience they will never forget; everyone said it was the only three-hour wedding they ever attended that they were sorry to see end. Shoshanna was beautiful. But that didn’t help the groom any. The groom’s father addressed the wedding attendees, disclosing to them that he had invested in his son, extolling all his skills of mountain climbing and rappelling, airplane piloting, wrestling, martial arts, etc., which no doubt ably prepared him to marry Shanna. It was funny, because it is so true. It took a MAN to win her.

She and her friends produced her wedding—an expression of all her dreams come true. Our weddings are never conventional—no two the same, little to nothing of tradition in them. But this one took the prize for originality. None of us knew the agenda, not even the groom and I. And I was so surprised by all that transpired, that I forgot my entire message and ended up speaking only about four lines before we actually pronounced them “man and wife”.

To begin with, it was outdoors at 7:00 in the evening, a cool day in June, situated on the very top of what we in middle Tennessee would call a mountain—actually just a tall ridge overlooking miles and miles of beautiful timberland, lakes, rivers, and pastures—not a house or road in sight. The guests, about 250 in number, sat among the wildflowers scattered about, some under the oak trees, others on the sloping hillside itself with the sun to their backs, looking into the ever changing backdrop of evening colors—a breathtaking panoramic view. James, the groom, and James senior and I stood under an arbor that Shoshanna had made from small trees with vines twisted around them, beautifully and artfully covered with wild flowers. It looked like the forest in which she grew up—something almost medieval.

James’ siblings were playing stringed instruments, the violins dominating. It sounded like a cross between Celtic battle music and a love song, nothing that you would ever hear at a church wedding.

We waited for fifteen minutes, and still the bride did not come out of her large tent set back in the trees. As the sun lowered, a stirring in the forest drew our attention, and there, silently emerging from the dark green of the tree line was a prancing horse being ridden bareback by Elizabeth, Shanna’s best friend and cousin. She came out of the forest like a phantom, her flowing, silky gold gown trailing in the gentle breeze, blending with the clouds behind her, and her long golden hair gracing her shoulders and back. The horse and rider as one glided across the ridge top toward us, and then, picking up speed, she swept past, seeming not to see us, as if we belonged to two different times and dimensions—an apparition, surreal, like something riding out of a story book. Many were now standing to their feet in wonder and awe, watching her silently pass. Ghostlike, she rode under an oak tree and disappeared into the deep foliage beyond.

The violin music picked up pace as if preparing us for the finale, and we all turned back to the tree line from which the first golden maiden had emerged. At first, we only caught a glimpse of flickering light passing through the deep green, and then out of the woods appeared a white horse carrying Shoshanna, also mounted bareback, her full white dress shimmering with the golden colors of the now-ebbing sunset, and falling across the hips of the prancing horse. Her head was crowned with a wreath of wildflowers, and her face glowed with the wonder and pleasure of the moment—her moment—the epical journey that divides life into two parts. It was magnificent, fabulously magnificent! But she did not slip past us as did the first rider, whose ethereal appearance seemed to have come as a silent announcement. The barefooted bride kicked her horse in the flanks and put him to a gallop, reaching up one hand to secure her crown and then urging the horse again. The only sound was of the hooves pounding the grassy ridge and kicking up sod, accelerating as though there were an urgency to reach a long awaited destination. She raced past the awed assemblage without regarding us, past the groom and the two fathers, and back into the woods where the first rider had disappeared. But then the horse and rider reappeared out of the trees on the far side and circled behind the audience until arriving at the head of the flowered aisle—the path that led to the arbor where the grinning fathers and groom awaited. The rider slid to the ground with the grace and ease of one raised to it. She looked like a gift from heaven, of which Eve would have been jealous. I sensed James starting to bolt—to run to her and scarcely restrained him with a quiet “Just stay here; she will come to you.”

As she reached the head of the aisle, she helped her two old granddaddies to their feet, 80 and 89 years old. Neither one of them are steady on their feet, and she is taller than both, so with one on each side, holding them up, she started down the path to the groom. I was looking into the most radiant face I have ever seen. Her walk and carriage were absolutely regal.

When they approached the arbor, I asked, “Who gives this woman in marriage?” The two granddaddies and I said in unison, “We do.” Shoshanna stepped forward and took the groom’s hand. I think everyone there must have felt as I did, that we were looking in on something very private and wonderful. I had a good and long message ready, but suddenly I felt like the tour guide at Niagara Falls or the Grand Canyon: No one wanted to listen to me. So, within three minutes, after an exchange of vows and rings, we two fathers pronounced them man and wife. James’ granddaddy brought forward the marriage contract and the glowing couple signed it in the presence of all. Then the parents and grandparents all signed the covenant of marriage.

After kissing…and kissing…and…you get the idea, the two of them rushed back down the aisle to their waiting steed. They mounted together. This time she was folded in his arms and they rode out before us against the now crimson sky. At that point, all I could think about was, “Don’t fall off the horse! What could be worse than a slipped disk on your wedding night?” But they stopped some distance from us, and there, still mounted on their charger and silhouetted against the dimly glowing sky, they kissed again.

But the celebration was just starting. As the light from the many lamps began to replace the fading sun, we could smell the barbeque cooking. After we had all eaten, there was a pie auction with a real auctioneer. Everyone got into it. Some of the young guys paid as much as $95.00 for a blueberry pie. They raised several hundred dollars to help pay for the honeymoon.

After the cake cutting and more picture taking, when we all thought it was all over, Shoshanna persuaded James to sing a love song to her while she slowly danced around him. Now, you know we don’t believe in dancing, as is commonly done at weddings, but this was beautiful. After James was well salivated, she reached up and passionately threw her flowered crown from her head. Hand in hand they ran across the hill to their waiting…no, not steed…car this time. And away they drove. We all stood there as if we did not want it to end. And it hasn’t. They are now back from their honeymoon, glowing all around us, a wonderful couple of good-for-nothing newlyweds. And me, I am already waiting for more grandkids.

That is now the last of my girls, all well married. What a blessing! What a joy! If life were any sweeter, I would be a jar of jelly.

Postscript
None of my daughters or their husbands asked the state of Tennessee for permission to marry. They did not yoke themselves to government. It was a personal, private covenant, binding them together forever—until death. So when the sodomites have come to share in the state marriage licenses, which will eventually be the law, James and Shoshanna will not be in league with those perverts. And, while I am on the subject, there will come a time when faithful Christians will either revoke their state marriage licenses and establish an exclusively one man-one woman covenant of marriage, or, they will forfeit the sanctity of their covenant by being unequally yoked together with perverts. The sooner there is such a movement, the sooner we will have a voice in government. Some of you attorneys and statesmen reading this should get together and come up with an approach that will have credibility and help to impact the political process. Please contact me when you do and I will assist with publicity.
Michael Pearl

My Favorite Way to Start Each Day