Filter by:
NGJ Magazine / Articles / Training and Example
Do you get our FREE Magazine? 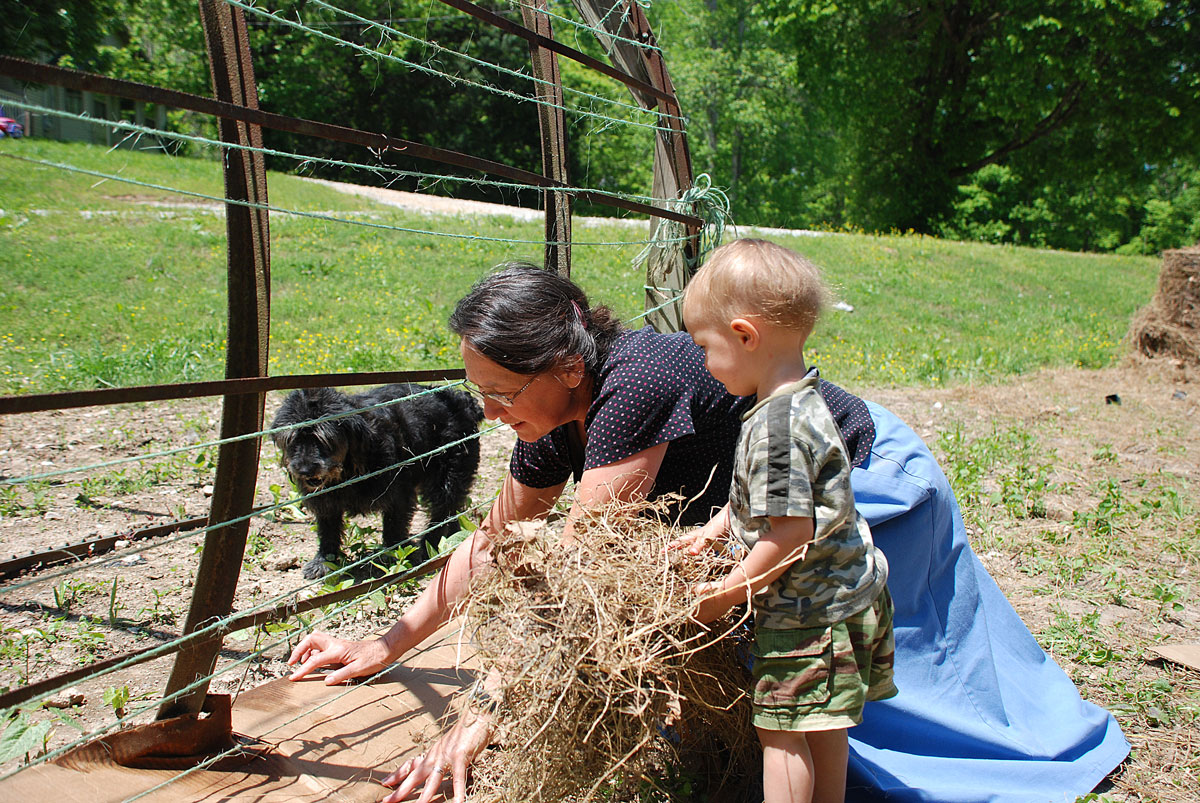 There are two aspects to child training. One is technique and the other is example. Technique involves knowing what needs to be done, what method will work, and how to implement it. By example, we are referring to that worthy condition of the parent wherein the child is motivated to emulate the trainer. Example involves teaching and instruction, whereas technique can be implemented before the child is old enough to understand reason or interpret example.

Many of our readers have been instantly released from fear and frustration as they discovered the simple concepts of training. These truths are not new or profound. We are not revealing something we personally discovered. It is just that in our age, psychology and the media have erased the common sensibilities of parents; or, in many cases, parents have been caused to fear rather than to trust their own gut feelings. When you see your own deep, though previously buried, feelings in print, and you hear that there is practical truth in what you felt all along, it instantly frees you from fear and indecision. So many parents have said to us, “It’s just like I knew it all along, I just couldn’t put it into words.”

For a child under two, technique is nearly the whole of training. This involves anticipating the kind of behavior you expect from your child and instituting deliberate events to train to that end. For example, if the first time an infant spits out his food you put it back into his mouth and say “No,” repeating that action as many times as necessary until he swallows it, and you are thereafter consistent to never allow a single exception to your rule, you will not end up with a two-year-old brat that spits food. Nor will you end up with a six-year-old that is finicky and demanding about what he eats.

Technique comes from common sense and experience and does not depend on the character of the trainer. No one can plead inability to be a good trainer based on personal shortcomings. At an early age, parental example matters only to the extent that it affects the application of training techniques. If you are slothful and angry it may rob you of the calmness required to train, but the character fault itself will not prevent you from training your child not to be angry. Being an obese, selfish, intemperate eater yourself will not prevent you from training your small child to self-discipline. But when he is twelve, and you are demanding that he develop a little self-discipline in his eating habits, your example will be all that does matter. In other words, when children are very young, who you are is not as important as what you do by way of training. The two-year-old cannot compare values and be offended by your inconsistencies.

Now, I don’t tell you that training can occur despite your own personal discipline in order to exempt you from the need to be a good example, but to make a point about the nature of training. Parents who rely on their own example are wasting their time with the one- to three-year-olds. Children need about three or four years of applied training technique before teaching can begin to be effective.

As children get older, they begin to develop knowledge of good and evil, and as such, example begins to play a larger part. By the time they are maybe seven or eight, example will become more important than technique. When they come to a mature knowledge of good and evil—around twelve to fourteen—technique matters little, and example is paramount.

Most parents are unaware of this growing shift in their children. Before they know it, the kids reach a point where they are no longer impressed by stern words and threats. Parents are shocked when they suddenly become aware that their children are judging them. These not-so-little children suddenly show “righteous” defiance and sling accusations back at their “hypocritical” parents. Though they may not speak it, their responses say, “Who are you to tell me what’s right and wrong?” The children cease to show repentance, because they lose respect for the moral measuring stick of their parents. When they realize that their parents are demanding more than they (the parents) are willing to give, it is like finding out that there is no Santa Claus. It was all a lie. Maybe everything is a lie. Wake up parents.

Parents are the last to see this change coming. They get comfortable in a routine that has worked well thus far. They successfully intimidated and bullied the kids into compliance. It sometimes took a while, but the bluster of the parents eventually dominated. But not anymore. It is too late for training to be effective apart from godly example. And the kids are far too mature in their knowledge of good and evil to be fooled by pretense and hypocrisy. In fact, at this fresh stage of moral awakening, children’s consciences are much more sensitive and demanding than is that of adults, who have learned to accept a certain amount of hypocrisy and pretense as normal. Nothing gets by the kids. They will hold your feet to the moral fire.

The problem is that most parents get it backward. During the first years of a child’s life, when example is useless, the parents just expect the children to grow into the mold of family life. Then when the children get old enough so their selfishness is no longer cute, parents begin to try to train them out of their bad habits.

In a family where there has been no training, the parents are angry, short fused, they often raise their voices, they are always frustrated and feel as if the kids are their adversaries rather than partners. The parents’ reaction to their failure to achieve results is something rather childish itself. The kid missed training and now he has no example. When you scream at a kid to stop screaming, what is the basis of your command? Threat? When your eyes flash, your pulse soars, and impatience pours from you like a sand storm, does the command that follows carry in moral authority, or just an I’m-bigger-than-you threat? The kids started out with no training, until they were incorrigibly indulgent, and now no example, just conflict with an adult size version of themselves. You are wasting your time saying, “Do you hear me!” They don’t. They can’t. Your attitude is louder than your words. To wait until it becomes a problem and then try to apply enough pressure to fix it is like waiting for a flood as a signal to build a levy.

How did this parent/child crisis develop? The one- to three-year-old children are treated like houseplants. They are cleaned, watered, fed, loved, and made a source of entertainment and delight, while the parents trust to example for the child to learn established limitations and boundaries. “Children left to themselves bring their mother to shame.” By the time they are three, if they have not only learned all the bad habits, they have adopted them as a way of life. Unwise parents trusted to emulation, and when that didn’t work they turned to intimidation. The untrained three-year-old senses the disapproval of those around him, but he doesn’t have the wisdom or self-control to labor for approval. He responds to rejection and criticism with rebellion. The parents, having failed to train them when they were three months old, find them despicable terrors when they are three years old. The children are still not old enough to reason upon example and respond in kind. Their flesh is in full control with no restraints through training. When children grow to about four years old, they have assumed an adversarial role—same as the parents. The parents bare down even more with threats and punishments. At the age of six or eight the children begin to make judgments about their parents’ shortcomings. At this point your life overpowers your words. By grounding, lecturing, balling out, and spanking parents think they are teaching the child right from wrong. They think they are training.

Much of the confusion and failure to this point is a result of ignorance on the part of parents. They took too much for granted and were always just a little behind the child. The child is the leader. The parents become reactors, always on the verge of meltdown. They are running along behind, disapproving and trying to pick up the pieces. They were not out front training. It is the difference between training a dog not to leave the yard or waiting until he gets a habit of doing so and then beating him for it.

So what is the answer if you have older children and now realize you have messed up? You failed to train when they were young, and you have failed as an example. What can you do to start over? Two things. First, you must change in your own heart. Just realize that your children are not your enemies. It is your fault that they are what they are. You planted the garden and failed to weed it, then you went in with a weed eater and destroyed half the plants. Don’t blame the garden. Repent. Admit your own failure and become humble. Depending on the age of your child, you will need to employ a combination of training and example. To the degree that your child can perceive your own inconsistencies, you must become a new person. Your child’s bitterness will continue where you are demanding more than you are willing to be yourself. If your child is older, he/she must be brought to repentance through the goodness and example of your own heart.

Your twelve-year-old is the best psychologist in the world. You can fool your prayer partner, your counselor, your church, but you will not fool that child. You must exemplify all that you want your child to become. Your child must love your soul and desire to be a part of it. Your love and righteousness must pull admiration from your child. It is too late for impersonal training techniques. There are still some training tools available to be applied to older children, but they only enforce the communication of our souls, they do not replace it.
Parent, God is calling us to continual repentance. Our children are our ultimate fruit. A teenager is a revelation of parents. Their maturity is harvest time. The wheat and tares are made manifest. Other than a recording made in secret, children are the only failures that talk back to us, that become an advertisement of our past. Our children will be evidence, admissible in the court of heaven. Let us repent daily and walk in truth with a pure heart. Love must flow from us to all the world, encompassing our children as the early dew settles over a garden. Without love all my discipline and lectures are as the clang of a garbage truck, a truck that leaves garbage rather than picks it up.