Filter by:
NGJ Magazine / Articles / Tumbling Tots
Do you get our FREE Magazine? 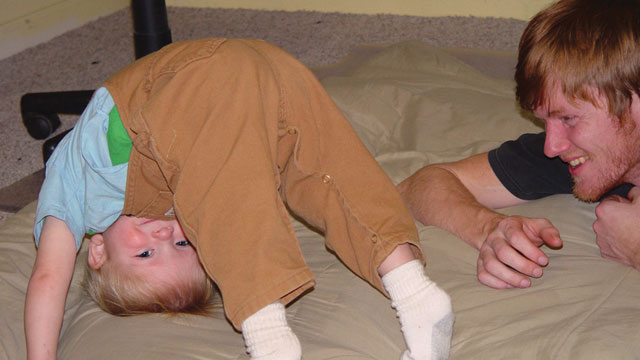 It is easier to see their faults than our own, mainly because we aren't emotionally involved and are free to think objectively. It is good to consider the advice of others whom you trust.

The other evening I was visiting a home, enjoying watching the small children romp. They had placed an old mattress on the floor so the kids could tumble on it. The daddy was stretched out on one side of the mattress encouraging the kids to do bigger flips. Every once in a while they would pile up on him. Great fun indeed! Mother sat off to the side laughing at their creative acrobatics. As the kids started to wear down and the hour grew late, he suggested that it was almost bedtime. After making the same observation several more times over the next few minutes, he told them to stop tumbling and prepare for bed. All three kids took another turn. He then spoke more forcefully (but it still sounded like a suggestion to me) commanding them to cease tumbling and prepare for bed. I could see that they regarded him a little more seriously this time, for they were somewhat hesitant when they again did a flip. He was a little agitated, and so with more force and threat in his voice, he again commanded them to cease their antics and prepare for bed. I watched them mill around as a struggle went on in their souls. "Can I get away with one more tumble? How serious is he this time?" The six-year-old boy put his head down on the mattress and slowly flipped over, looking at his daddy to see if any wrath would follow. His half compliance met with a half command and so he got in one more slow, tentative roll before he settled down. It took about five minutes from the first command to complete compliance. For this family it was normal. The kids obeyed without a fight. No one threw a fit. No one got a spanking. Daddy never got mad. For most families it was without incident--no problem, totally normal.

The problem in all this, aside from the fact that the children are not learning to instantly obey, is that for five minutes the children were saturated with anxiousness and rebellion, however subtle. They were defying authority and acting out their self-will. That five minutes was not good for their souls. It created insecurity and damaged their relationship with their parents. You can be certain that because of many moments like that, there will be times when these kids will push it further and openly resist authority. Every moment they hesitated, they were dishonoring their parents.

I get anxious at moments like that. I recall how we handled similar situations. I would have been shocked if my children had not instantly ceased with the slightest command. It was unthinkable that they should hesitate to obey and take another half tumble. If one of my kids had ignored my command and done another flip, I would have immediately secured a spanking instrument, had the child bend over in the tumbling position, and given him one good lick on the backside. It is because we were always consistent that we didn't have to spank very often and never had to nag. The children didn't have those five-minute periods of defiance. We remained in fellowship, and they grew up emotionally stable. Think about it.