Filter by:
NGJ Magazine / Articles / What's That Stink?
Do you get our FREE Magazine? 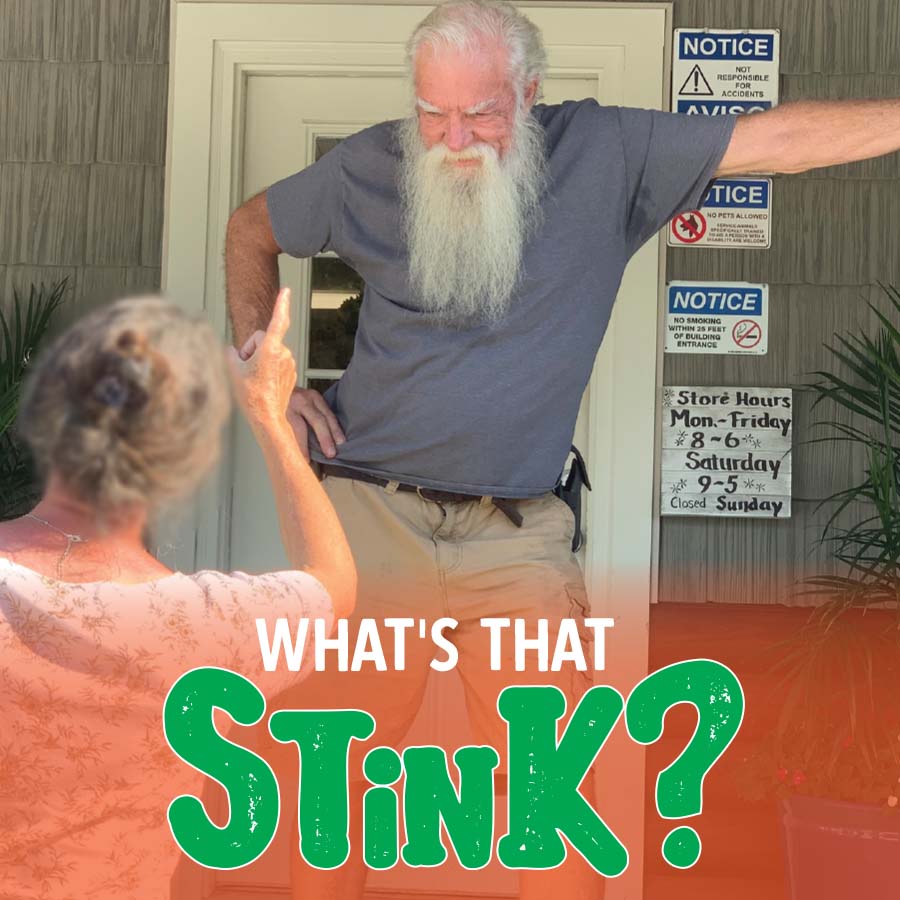 A few years ago (before Mike took on a more socially accepted demeanor) we pulled into the parking lot of our local country store just as an old friend drove up beside us. We got out of our vans and began to visit while her two children, about 4 and 6, crawled out of the back seat. Both kids started tugging on their mama’s arm, whining for ice cream. Their behavior was surprisingly way out of character from how she had raised her five older children. I couldn’t help but notice Mike’s sudden stiffening as he sniffed the air like a coon dog on the hunt. A very nasty odor came from the interior of the vehicle as the kids climbed out. Our friend, whom I will call Brenda, noticed Mike’s sniffing response as well. She hastily began to dig in her purse, quickly pulling out a five-dollar bill and shoving it at her 6-year-old daughter. “Take Frankie in and pick out what you want.”

While she was purse digging, Mike, being his usual frank self, said, “What’s that disgusting stink?” He knew quite well what the foul odor was. It was sewage emanating from the almost-4-year-old boy with droopy britches. Frowning, Big Papa looked down from his large 6-foot-5-inch frame at the little kid. “Boy, don’t tell me a kid old enough to shoot a gun is still dumping in his pants!” The boy frowned as he grabbed the five-dollar bill from his peevish sister and waddled as fast as his fat legs and heavy diaper could take him up the steps and into the store.

Brenda is a spitfire, so I knew a flame was coming. I wanted to trail up the steps behind the stinker, but the stench was too much to bear. The tiny mama almost spit, “Mike Pearl, don’t you ever try to shame my son! You mind your own business!” Her demanding, authoritarian tone could stymie an impending assailant, but not Mike. If you have read my book Created to Be His Help Meet, you will know about the three types of people created in God’s three-part image: Father (kingly), Son (priestly and steady), and Holy Spirit (visionary). Brenda has all the makings of an extreme King and so does Mike. Me, I’m a chicken.

Mike stared at Brenda like she had lost her mind. “That half-grown kid dumping in his pants doesn’t need any help from me. He has clearly already shamed himself, and do you think this NOSE on my face is not my business? What happened to you, Brenda? I watched you when you raised five good, self-disciplined, self-restrained, self-respecting kids, and now these two last kids are fat whiners, AND your 4-year-old son still dumping in his pants!”

Brenda was loaded for bear, and she had obviously found one. “He’s NOT 4. He will not turn 4 until next month. Besides, I have learned a few things, AND I am willing to admit that I made mistakes with my older children by being too hard on them. I can see why my oldest daughter has emotional issues and bitterness toward me. I have learned that it is wiser to allow the children to develop at their own speed. I am following the new school of thought called Loving Touches.”

Mike was shaking his head and looking disgusted. “You’re kidding. I know all about that new nonsense and it goes against what God says in Scripture and against common sense. How can YOU possibly fall for that and expect God to bless your family? Even the world knows better than that. All professionals agree that self-restraint must be developed in the early years. In ten years these two kids will have health issues from being overweight, AND you are letting it happen with your so-called ‘loving touches.’ Self-discipline saves people from all kinds of struggles.”

The fMRI had not been developed when this conversation occurred, but if it had been, Mike could have told her that secular science teaches that the brain establishes what is called “executive functions” at a very early age, and a highly developed executive function leads to diligence, hard work, self-restraint from food, drugs, sex—all immediate lust—and more. There are many negative life issues that come from not having developed self-discipline and self-restraint early in life. Clearly self-discipline contributes to a good self-image.

Mike picked up his conversation with Brenda. “You know that I KNOW that grown daughter of yours has bitterness due to your own rebellion toward your husband in the early years of your marriage.” Mike does have a way of getting to the nitty-gritty. I couldn’t help grinning in memory of Brenda’s hard-headed early days, but I felt his response to her was kind as well as firm, “You were a tough wife to deal with, but I gotta hand it to you, you did learn how to honor your man based on God’s will and not your own. So now please don’t let guilt cause you to lose your way as a tiger mama.”

Clearly Brenda knew she had hit a brick wall and was not going to intimidate Mike into believing the “soft love” way of raising kids. I have to add here that her older children had contacted us several times and asked us to talk to their mom about the younger children and her newly discovered “gentle parenting” nonsense. It had been a while since they had contacted us. Mike was patient and waited until God set up the perfect opportunity. So, like Brenda, he was primed (having read the new silly book) and ready to shoot until he won the war.

What is sad is that Brenda knew everyone thought her two younger children were brats. The grown siblings had told us that there was often a fight at home due to the two younger kids being lazy and not expected to do any chores, plus they were disobedient and even on occasion really mean. They were treated to “loving” instruction rather than overdue spankings. It caused a lot of animosity in the older siblings who were forced to live with the spoiled brats. The older siblings told us that they didn’t even like the younger ones and were embarrassed to be seen with them. Brenda was continually reminding her older children that to honor God they must love their siblings, but teens don’t live lies like adults do.

Brenda could see the writing on the wall so she told Mike, “Let’s agree to disagree.” She smiled trying to bring peace to their discord. “It was still good to see you doing so well.”

Mike shook his head at Brenda, “No, Brenda, you are too good of a friend to pretend all is well. Be mad if you want to, but know this: what you are doing to your younger kids is against God’s written Word and it will return evil for the family.”

All is well that ends well. Alas, this did not end very well. Brenda did finally let go of the foolish gentle parenting ideas, but what had NOT been established in the brains of the two younger ones caused them to grow up dealing with health issues. Mike’s ten-year prophecy was fulfilled to the letter and it didn’t take a prophet to see it coming.

My book Create a Better Brain through Neuroplasticity shows how the brain develops (it can be seen on fMRIs) and what we as parents can do to build into our children the self-reliance that makes them leaders, movers and shakers, confident to charge ahead, and with a good self-imagine. Some people go through life never having to struggle with overeating, drugs, or being lazy. It is because their brain was patterned to self-restraint. Self-restraint comes as naturally to them as not jumping off a high roof. Obviously this isn’t the whole of child training, but it is an essential part.

Please don’t get me wrong; a person can be a great human who is loving, kind, and patient without ever developing any self-discipline in his youth. He can be such fine person that everyone really likes him, but deep inside he will FEEL the downward pull, causing him struggles that he didn’t have to have if only his parents had built in him strong habits of self-denial and duty. As a parent, you can help your children have a healthier, happier, and more successful life by setting executive functions into place. My book teaches you how. It gets 5 stars on Amazon. Time for you to read it today. (It is also available as an audio book.)