Filter by:
NGJ Magazine / Articles / "Wusay, Wusay, Ai Yanday!"
Do you get our FREE Magazine? 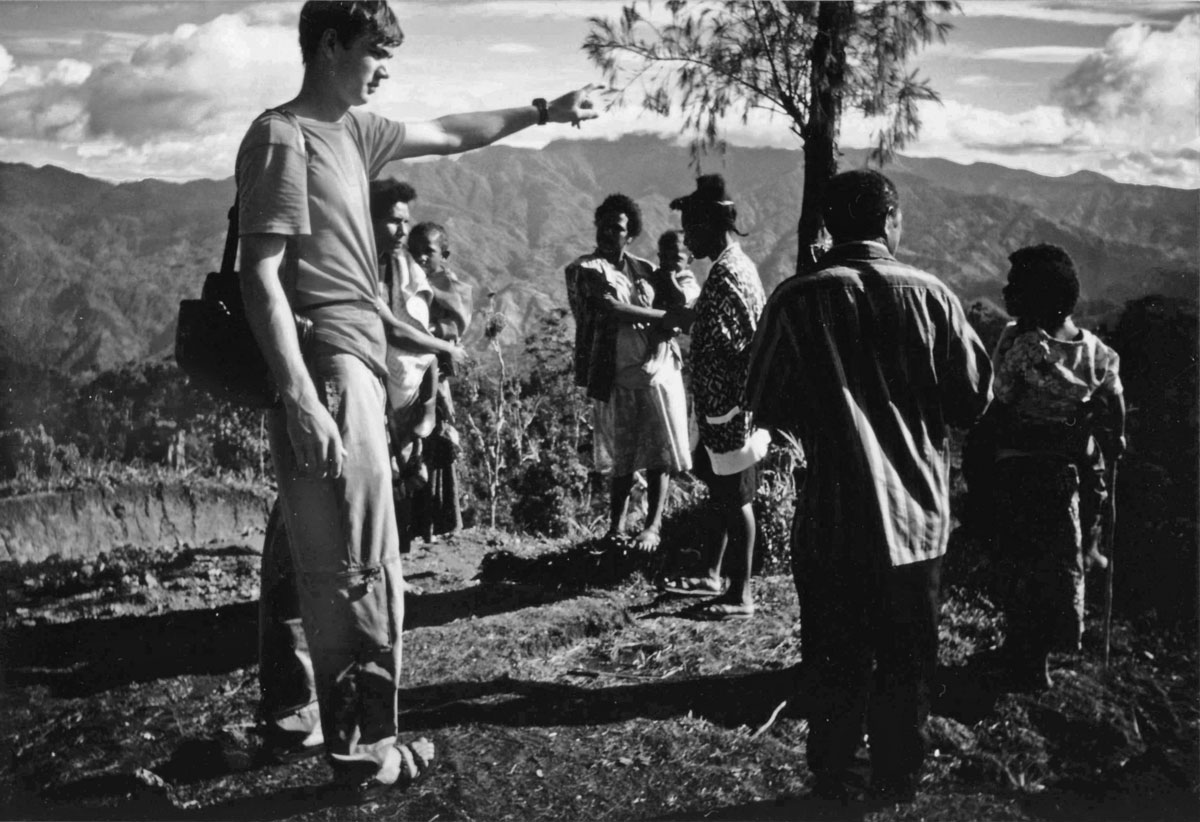 After twenty-five hours in the air, here I stood below the equator with my lanky, eighteen- year-old brother in a strange country thousands of miles from our little valley in Tennessee. As we picked up our back packs and wandered bewilderingly toward the buildings, I was wondering what we would do if our contact did not come to pick us up. God has called me to go to the primitive unreached tribes of Papua New Guinea, learn their language, translate the Scripture, and teach them how to read it. I have been told more than once that it is not the job for a young lady. I too have wondered how I would survive alone in a primitive tribe. I have prayed that God would send another woman to go with me.

Our purpose in this trip was to make contact with a language group in the highlands of the Madang region who are listed as unreached. If we could do a language survey and somehow communicate with the people, we could determine if they are willing to have a missionary.

Roads are few and far between in Papua New Guinea. The country is separated by wide rivers and swamps in the lowlands, and steep, impassable, mountain ranges in the highlands. To get from one area to another, one has to fly in small bush planes. While we were in P.N.G., four missionaries were killed in the crash of one of these small planes.

Our contact, the Lindseys, were there to receive us, and were very helpful. They are doing a great work there in the city of Port Moresby. While we were waiting for our flight to the Madang region, I met a young national woman from the highlands. Seven years ago, when she was about nineteen, she left her tribe and came down to the city seeking a better life. Two years later she was saved under the ministry of the Lindseys. They have discipled her until she is a strong, faithful believer. She is well educated, for that country, and has been working in the Post office.

One year ago, about the time I entered linguistic training, God called this young woman to be a missionary to her own country. She has been praying for a partner to go with her. After she heard about me, she spent a night in prayer and then informed me that she would be willing to go with me and serve me in any way she could.

Kathy speaks her native language, Pidgin, and English. The P.N.G. culture is natural to her. Working at the Post office, she also has useful knowledge in navigating the bureaucracy of that country. I could not have imagined a more suitable partner. God is a God of provision and perfection. He was answering before I called.

God had now provided me with a partner, but I still must make contact with a tribe somewhere in the mountains. After two days, we flew to Madang where we were graciously received by the Williams’ family. They too proved to be of great assistance. We discussed what approach to take in getting into the highlands and the possibility of getting a guide. Then, one day as they were driving through the city, Bro. Williams and Gabriel passed a man walking down the road. The missionary recognized him as a native pastor from the very region to which I desired to go. It was unusual for him to be in town. But you know how things “just happen” when God is in it. He stopped and invited Pastor Allen to come to the house and meet me. Through a little broken English and the interpretation of Bro. Williams, we were able to learn that Pastor Allen had come down to the coast and heard about Jesus. After getting saved, he went back to his people and began to preach the good news. Struggling, without a Bible in his language, Allen managed to convey the gospel to a few hundred of these people, and has a small body of believers now that meet on Sundays in their church hut. They constructed a building of native material on top of a mountain and named it Rock Baptist.

He is presently engaged in trying to disciple about ten young men whom he calls his preacher boys. They do not have a Bible in their language, and they cannot all read Pidgin. He is trying to teach them to both speak and read the Pidgin trade language so they can read the Scripture. How would you like to have to learn to speak and read German so you could read the Bible? It would take a life time to get proficient.

When he heard that I was interested in providing Scripture in the language of his people, he was so excited that he began to stutter and could no longer speak the broken English. He turned to Jerry Williams and said in Pidgin, “Does this mean that we will have a Bible in our own language?” With great excitement, Allen invited us to come and visit his people. It turned out that he is a son of one of the “seven fathers,” the patriarchs of these seven thousand people of the Kumboi language. That, plus his education and contacts with the outside world, makes him a highly respected leader among them all.

Here was an open door far beyond our hopes and prayers. The Lord had again gone before us. I will use Pastor Allen and others to assist in translating the Scripture. As they spend long hours coming up with the right words to convey the meaning, they will be learning the Scripture far more intimately than the average American preacher knows it. As a woman I will never have to take the lead. The gospel will go forth through their own national ministers as they are given the Scripture in their own language.

Allen’s tribe is located between the Aiome and Simbai and speak what they call, Kumboi. These three people groups are somewhat integrated, and the languages are similar. There is intermarriage and business done between them all the time. The Simbai and Aiome people have had missionaries, but the Kumboi people do not. These seven thousand villagers are scattered throughout the mountains and valleys in about a twenty-five mile radius.

Soon after our first meeting with Pastor Allen, Gabe and I were on our way toward the dense jungle. At least one hundred natives were waiting beside that little grass airstrip nestled in the mountains. With broad smiles they shouldered our backpacks and pointed up the mountain trail. Beaming and nodding at one another we began our three hour hike straight up. Before our time there in the interior was over, Gabe and I would hike over sixty miles of rough terrain.

After a while, the girls lost their shyness and would reach out and touch my hair, exclaiming in amazement at the texture. Soon, dirty, black hands were running up and down my arms to see if my white skin felt any differently from theirs. Half way up the mountain, we met an old tribal lady who laughed and screeched and crooned with toothless delight at our arrival. Others expressed the same attitude.

The Kumboi people are pygmies and very small, so Gabe and I seemed like white giants to them. They had Gabriel stand up against a tree so they could notch his height on it for proof that someone that tall had really been there. They very rarely, if ever, take baths or wash; so you can smell them coming from a long way off.

When at last we reached the FokeFoke village where Allen and his family live, there were more people waiting to greet us. The women crooned in a singsong voice their welcome to me; “Wusay, wusay, Ai yanday....” Welcome, welcome our sister. Allen and his wife gave us their hut to stay in. It was made of bark and grass, but very neat and clean.

Because of Pastor Allen, our safety and well-being was promised as long as we stayed among the Kumboi. For nearly two weeks, we stayed with them, often hiking for three or four hours deeper into the bush to visit another village and do some language study. We struggled up and down impossible trails, slipping and sliding and clinging for dear life to vines and roots, lest we plunge to the bottom of the mountain a thousand feet below. The places we went, no white person had ever been before. It was primitive in the truest sense.

Allen had brought in cast-off clothing and most of the people were somewhat dressed. It was funny, but not unusual to see a man wearing and old suit coat and a loin cloth.

One evening in the Aikram village, many of the old fathers and leaders of the Kumboi people, gathered to talk to me. We huddled around the fire pit in a smoke filled hut where the fire light gleamed and played on some twenty, ancient, black faces. The murmur of low voices solemnly conferring with one another in an unknown language mingled with the night sounds of the jungle. The strong smell of wood smoke and stale sweat permeated the tiny hut and filled my nostrils. With Allen translating, I explained my desire to bring them a Bible so that they might learn about God. Solemnly they nodded their heads and grunted approval. They promised to assist by building me a hut. They thought it was a good thing that their language would be put into writing and their children learn to read. Allen could hardly sit still, his excitement was so great. A Bible to preach from — in his own heart language! Joy at their open reception lifted me up even as the heavy responsibility weighed me down. How could I possibly manage to minister to some 7,000 people, teach them how to read, and translate a Bible for them — all in one lifetime? God knows. Truly the harvest is plenteous but the laborers are few!

For the next few months, I will be traveling across the US showing slides and sharing my heart for the Kumboi people. If you are interested in having a meeting, send us your phone number, and we’ll arrange something over the telephone. I thank all of you that labored in prayer for Gabriel and I during our trip to P.N.G.