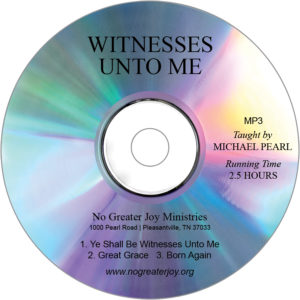 Michael Pearl:  John 3:36,. "He that believeth on the Son hath everlasting life: and he that believeth not the Son shall not see life; but the wrath of God abideth on him." Then the third verse—there were two times it said born again in that passage—the third time that it uses the term born again is in 1 Peter 1:23. You can turn to that if you like. "Being born again, not of corruptible seed, but of incorruptible, by the word of God, which liveth and abideth forever."

So what is the seed, the divine semen that produces conception and brings forth a new birth? Look at the rest of the passage. "Being born again, not of corruptible seed, but of incorruptible, by the word of God, which liveth and abideth forever." So the seed of God is his Word.

How scary, how freaky, that they would do that. Now, a person might get born again reading the New International Version, but they're liable to have a third eye or an extra leg or be congenitally joined because you're going to be genetically altered if you get born again through that one. [laughs] That's just a joke.